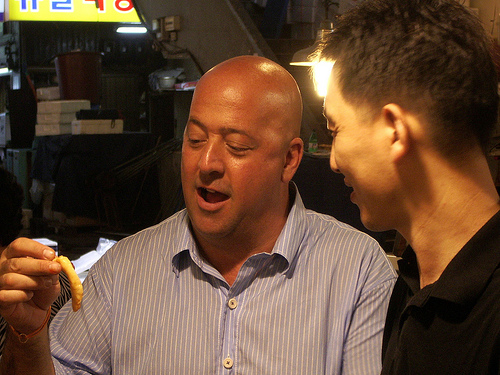 We’re reaching the end of the hype week for the South Korea episode of “Bizarre Foods with Andrew Zimmern.”

This has all been in the works since we first got the call to help with the show back in August 2008.  I don’t think I have another Bizarre Foods post left in me.  By now, I think they’re scattered all over the place.  So I’ll link all the Bizarre Foods Posts here.

Part 1: Scouting Locations – We help come up with foods, restaurants and ideas for the show.

Part 2: Getting Folks on Camera – Finding Koreans to speak English on TV is hard.

SundaeGuk – A big bowl of nasty

The Official Site for the South Korea Episode

UPDATE: The South Korea episode is now available for purchase in iTunes.