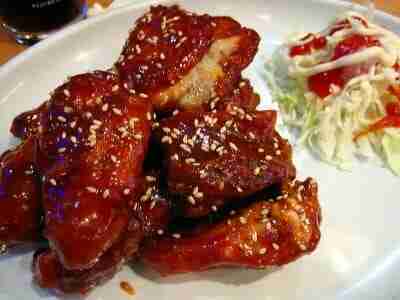 That’s not an easy question to answer. There’s not some monolithic Korean chicken recipe. There are many styles. I shall concentrate on the big three styles coming from the big three chicken chains, Two Two, BBQ, and Kyochon.

Two Two style has the most Asian exotic flavor. There’s a little anise, black pepper, and cinnamon flavor to it. It’s similar to Chinese five spice but not exactly. On the Two Two web site, they say that they use traditional Korean medicine in the preparation. This follows a Sino-Korean approach to food and medicine. They are one and the same.

In fact, that is a major selling point in a lot of Korean foods, even fried chicken. The health benefits are advertised on the same level or more than the actual flavors.

Eun Jeong says that Koreans don’t like greasy foods. This is evident in the Two Two style of cooking the chicken. There is not much breading on the chicken pieces. They’re pre-fried and placed aside.

It’s strange, but there’s a method to this madness. In restaurants I’ve worked in, we pre-fried the french fries. We called this blanching. We then put the fries aside for later. When we fried them again in hotter oil, the results were fries that were crispy on the outside with a mashed potato consistency inside. 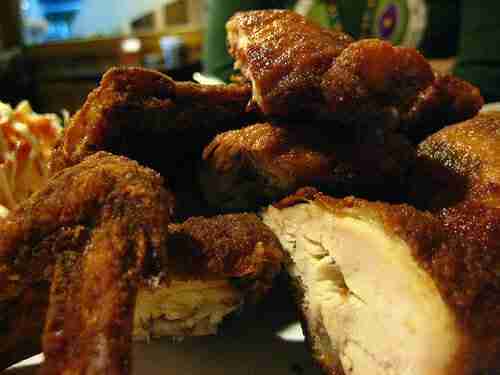 Yeah, yeah, you don’t get a mashed potato consistency in twice fried chicken. But you do get a crispier skin. Also, pre-frying lets the restaurant quickly prepare fresh chicken to order. Otherwise, you’d have a long wait for your chicken, or, like many American chains, you get chicken that has been sitting under a heat lamp, soaking in all its grease.

Fried chicken at Two Two comes with a salt, pepper, and sesame seed mixture and a spicy sweet garlicky dipping sauce. You can ask for your chicken yang-nyeom 양념 style, where they smother the whole chicken in the sauce. I sometimes like this. Brant can’t stand it. He calls it “yang-yuck” chicken (“It’s too too sweet”).

Most all the fried chicken establishments serve their chicken with the yang-nyeom sauce on the side or smothered all over. 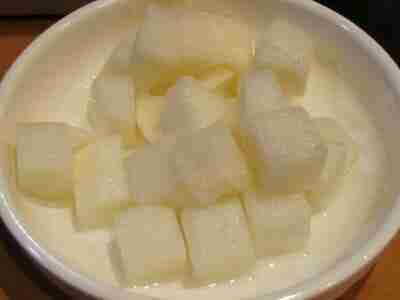 My only complaint with Korean fried chicken is the sides. If there were biscuits or a decent coleslaw, it would be perfect. Instead, we usually get a pack of pickled radish, which even Koreans I know say isn’t that good. We also tend to get shredded cabbage drizzled in lines of ketchup and mayonnaise. Some establishments mix the ketchup and mayonnaise first. That’s the closest we get to coleslaw. Barbecued chicken restaurants do this too, but that’s another post. We eat these sides because they’re all that’s available, and they help cleanse the palate when the mouth becomes too overwhelmed. 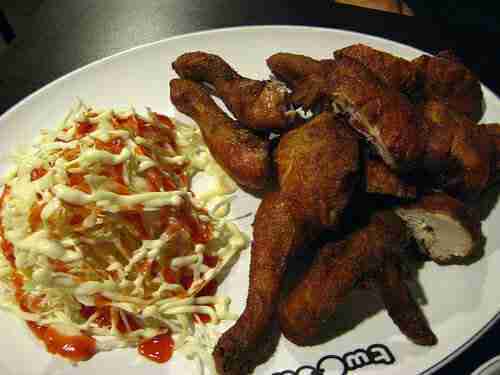 That’s the Two Two style. It’s safe for me to claim that most chicken hofs use this style. And that’s another good thing about chicken hofs. They’re hofs. You can have beer with your chicken. In fact, yes, fried chicken is considered a drinking food–well, at least a party food. It’s not dinner. It’s something you eat after dinner or at a birthday party. You can even order draft beer to go.

There are Two-Two chains in Japan, Russia, Vietnam, and Australia. There don’t seem to be any in North America yet.

Now for the other styles. 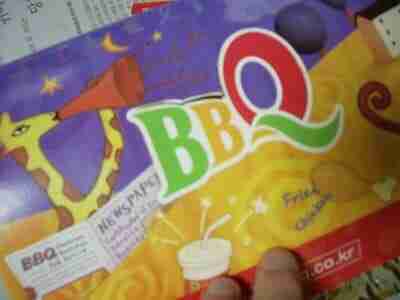 BBQ (pronounced Bee-Bee-Cue) is the largest fried chicken chain in Korea. They have a thicker breading on their chicken and don’t use the twice frying method. It’s closer in style to American fried chicken. Yet the spices they use are different. I can’t put my finger on it. They brag on their web site that they use a lot of ’em.

BBQ also follows the trend of advertising its health benefits. When I first came to Korea, it was plugging its Calcium Fried Chicken.

I don’t know still how they put the calcium in the fried chicken. Do they soak it in milk?

Now they advertise that they fry their chicken in 100% olive oil. They have big cans of olive oil sitting outside their stores.

Nonetheless, they put out some really good chicken. The flavor is addictive. If they ever set foot on American soil, they would expand as quickly as Krispy Kreme has expanded in Korea (there’s now a Krispy Kreme within walking distance to me… my poor waistline). So far, they have expanded into China and Spain. 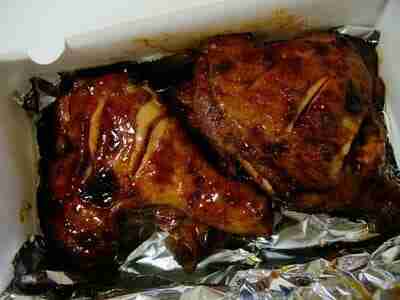 This past summer, BBQ came out with what they called an African chicken. It’s a barbecued chicken that tastes very close to Jamaican jerk chicken. Another hit from those guys.

BBQ is not usually a chicken and beer place. Yet they have recently started opening “BBQ Chicken & Beer” hofs. I’d like to check that out sometime.

The third main style is Kyochon. Kyochon boasts that its chicken stays crispier longer. Their method is to dip their chicken in a sweet garlicky batter before frying. They also don’t pre-fry, and each time I’ve gone to Kyochon, it has been a long wait to get my order. They are also the greasiest of the three styles.

Nonetheless, they are good. I know some people who swear by Kyochon chicken. And the people I have introduced this to have been surprised by the flavor. It’s one of those chickens that causes, hmm, less than refined behavior in people–sucking on chicken parts, licking fingers, making Cro-magnon grunts.

Kyochon also promotes itself as “better-being.” I don’t know specifically what its health benefits are, but they do have a new walnut fried chicken that I haven’t tried yet. I think they’ve also resolved to stop using trans fats. 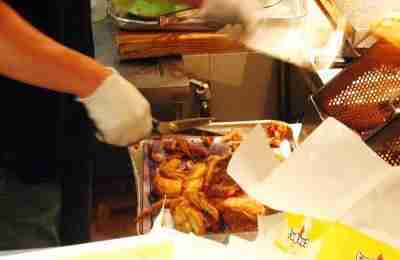 All Korean fried chicken places cut their chicken in the Asian style. Rather than cut them based on the joints between bones, they hack them with cleavers or scissors into mysterious pieces. This makes the dark meat almost indistinguishable from the white meat.

One thing I like about many of these chicken places is that these are great mom and pop operations. Last week, I got some chicken from a place close by that I hadn’t tried yet. They were a Two Two style hof. It was a wife, a husband, and two children in hapkido uniforms. The husband was very chatty and asked me lots of questions in Korean and English. He made me feel like they were cooking me a home cooked meal.

One of my first Korean friends outside of my workplace was the guy who owned the BBQ near my place. He always greeted me when I passed by and sometimes gave me discounts on the food.

One evening, I got stood up on a date, and took the long subway ride back home. I walked forlornly through my neighborhood to my apartment. The BBQ guy saw me pass and noticed I didn’t look like my usual happy self. He opened his cooler, tossed me a canned soda, and patted me on the back.

That, my friends, is Korean hospitality.

Update: Kyochon has opened its first store in New York.

KYOCHON CHICKEN This Korean 1,050-restaurant chain, said to be the inspiration for the wave of Korean fried chicken spots in New York and on the West Coast, has opened its first New York outpost. Two more will open in Bayside, Queens, in a few weeks: 156-50 Northern Boulevard, Flushing, Queens,