Behind-the-scenes with Bizarre Foods #2: Getting Folks on Camera 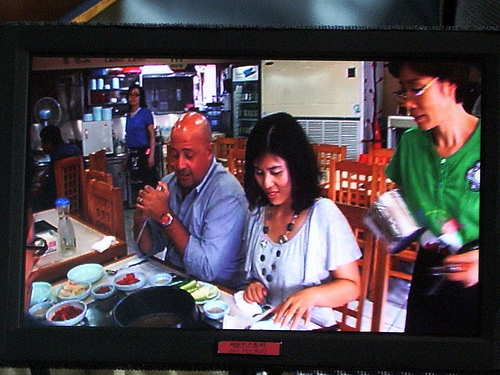 Andrew and Eun Jeong get ready for some turtle soup

[Behind-the-scenes with Bizarre Foods #1 is here.]

When last we left, the folks in charge of the Seoul episode of “Bizarre Foods with Andrew Zimmern” had hooked up with me to help plan out their show.  I went around and scouted a few locations.

From there, it became regular to get onto Skype with Kel or have them call my cell phone while I was out to throw around more ideas.  I had sent them a list of food I felt would be interesting.  They held meetings with Andrew Zimmern, and he chose which ones sounded TV worthy.  Some of the ones that I was disappointed to have rejected were Dotorimok 도토리묵 (Acorn Jelly), Gobchang 곱창 and Makchang 막창 (small and large intestines), Budae Jjigae 보대 찌개 (basically Spam and hot dog soup) and Dalk Bal 닭발 (Spicy Chicken Feet).  The Travel Channel execs from the beginning of the series stated a list of foods that they felt were over the line for American audiences.  Dog meat was on the list.  So that was out.  Fortunately, some stuff still made the cut, including Hong-eo 홍어 (Fermented Skate), the blowfish, Haejangguk 해장국 (Hangover Stew), and Changgukjang Jjigae 창국장 찌개 (Stinky, Stinky Soybean Stew).  Ddong Dwaeji 똥돼지, which is supposed to be pigs who are fed human feces, turned out to not really exist in Seoul and was more or less a marketing ploy.

I know, I know.  Only in Korea can you use poo-fed pigs as a marketing gimmick for pork–and people will come.

He then got the idea to tangentially put me on the show by getting my fiancee (now wife) Eun Jeong on the show instead.  Eun Jeong was deadset against it.  She didn’t want to speak English on camera.  This was a problem I was going to have with many Koreans I talked to.  She said she was not a food person.  That you’d know was a lie if you had ever tasted her food.  This just wasn’t her bag.

But she did it for me–I mean, the Food Journal.

Kel had this idea for an act where since Korea was such a wired nation, Andrew could restaurant hop with some food bloggers.  Again, the trick was finding Korean food bloggers who spoke English.  Of course, my friendly food blogging rival Dan Gray of Seoul Eats could go into the mix.  I stress friendly, as we’re good friends, and it’s a positive rivalry.  At the time, though, I was a bit disappointed about a then recent New York Times article I had worked very hard to help the writer and set him up with the right places and people basically cut me out and made Dan the center of the story.  Dan was ethnically Korean, so he could pass the quota for the show.  Wish I could have said the same for Jen Flinn, who spoke better Korean than any of us by far.  She didn’t make the cut.  So the trick was to find a third Korean to fill that last space.  In the end, we got Eun Jeong’s old tour guide friend Eun Hak, who had recently changed careers to be a healing massage therapist.

They still needed people for the other acts.  They had the American and his girlfriend for the sauna act.  Daniel had found some people for the soup act.  They needed guides for the kimchi/fermented skate act and the Noryangjin Fish Market act.

I got back in touch with an old friend from my early days in Korea, Soo-jung.  She had recently gone through some culinary certification and was the person who introduced me to fermented skate–and her English was good.  She was also closer to Andrew’s age in an episode where it was turning out to be mostly people under 40.  Her only reservation was that she didn’t know what all to say.  I told her to just go on my web site and read what I had already written about kimchi and fermented skate.

The Noryangjin Fish Market one was the absolute hardest.  They were going to use someone from the soup segment, but they didn’t like repeating guides between acts.  I tried to get our old friend Injoo involved, but he was on vacation in Japan.  I also contacted my journalist buddy Gwang-lib.  He was very hesitant.  He knew the market a bit, but he wasn’t a foodie.  He also was wary of the message of the show–that it would make fun of Korean culture.  I reassured him that it wouldn’t, that the premise of the show was to, in a way, educate people that what they think is gross may actually taste good.

He agreed to be our back up if we couldn’t find anyone.  But he refused to eat live octopus.

I went to the end of my Facebook networks, email lists and cell phone directory.  I then got a reply from Cathy (SeoulLife.net), saying that our mutual friend Jennifer Lee (Between Pee and Kimchi) had introduced them to this amazing restaurant called Star Chef.  The guy was amazing.  He knew fish.  And he spoke some English.  I contacted Jennifer, and she asked her husband.  They tracked down his information, and I got Eun Jeong to call him. 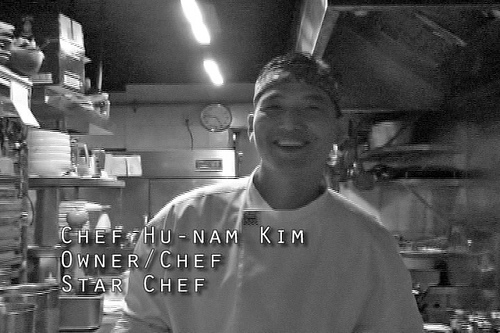 By this time, the crew was already on their flight to Korea.  We were really cutting it close.

Chef Hu-nam Kim, at first, had no idea what we were talking about.  But Eun Jeong explained everything, and he said he’d be happy to do the show.  I contacted Kel.

“A little shaky.  But he’s a real Korean chef, and you don’t have any real chefs on this episode.”

The question was left up in the air.

The crew got in town.  Andrew was coming later.  I met them that evening in Mapo after work.  I got Kel some dried squid and the rest of the crew some chilled green tea as a welcome gift. 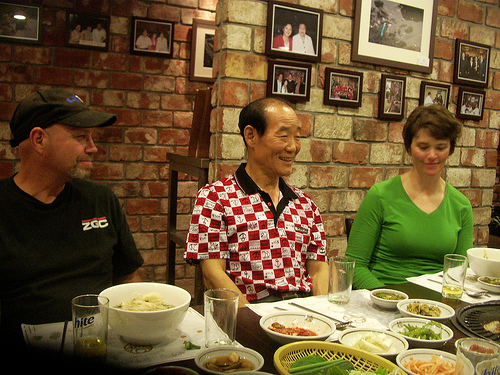 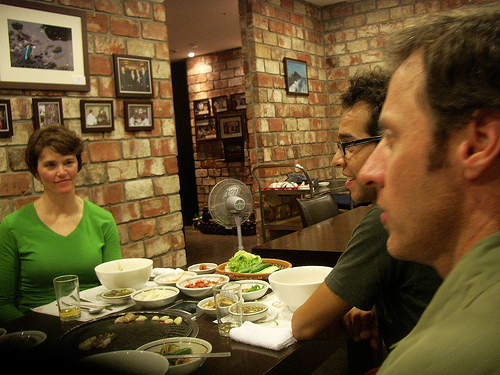 I got lost in trying to find out where they were eating, though.  They were having some great grilled beef at an upscale restaurant that was popular with famous Koreans and every Korean president.  I met everyone, including the director Kel, the vice president of the production company Jane, the famous videography bad asses Scott and Richard, and the Korean fixer Raymond.  They were being wined and dined by the owners of this restaurant.  The wife was getting thoroughly sloshed and was starting to look like she was having fun ordering her servants servers around.  She then started flirting heavily with one of the crew members (whose name will be withheld for the sake of blackmail). 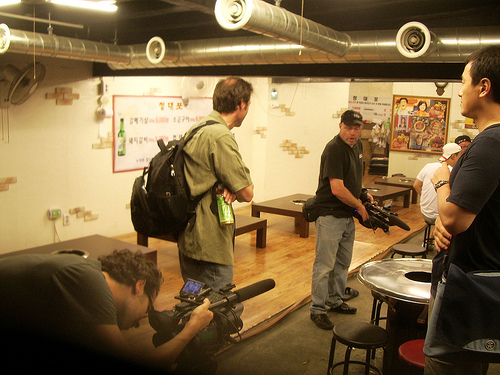 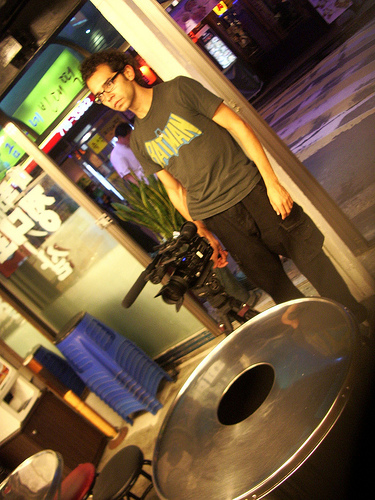 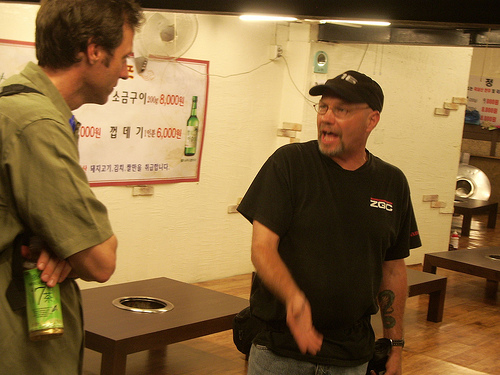 After dinner, we piled into a van, and the driver took us a little roundaboutly to the place where Mike and I ate samgyeopsal.  They got out and explored.  Scott and Richard started taking videos.  Drunk ajosshis tried to get in on the act as Raymond shooed them off, and I tried to in my pidgin Korean.

The question of the Noryangjin guide was still up in the air.  I suggested that they at least meet Chef Kim at his restaurant.  Since it was relatively near their hotel, they ate dinner there the next night.  They were so impressed by his food that they decided to take a chance and have him be the guide for the Noryangjin act.