I just finished my monthly column for Korea.kr on a similar theme, and I’ll state here what I said in the column. We’ll mark 2011 as the turning point when Korean food started hitting the mainstream. More print, pixels, and airwaves were spent talking about it than ever before. Since 2008 the big culinary industry fortune tellers have been predicting Korean food to be the next big thing. It’s starting to finally happen. They’re predicting it again in 2012.

Tammy and I thought we’d run down some highlights of the past year in Korean food, in ZenKimchi, and in our personal and professional lives. 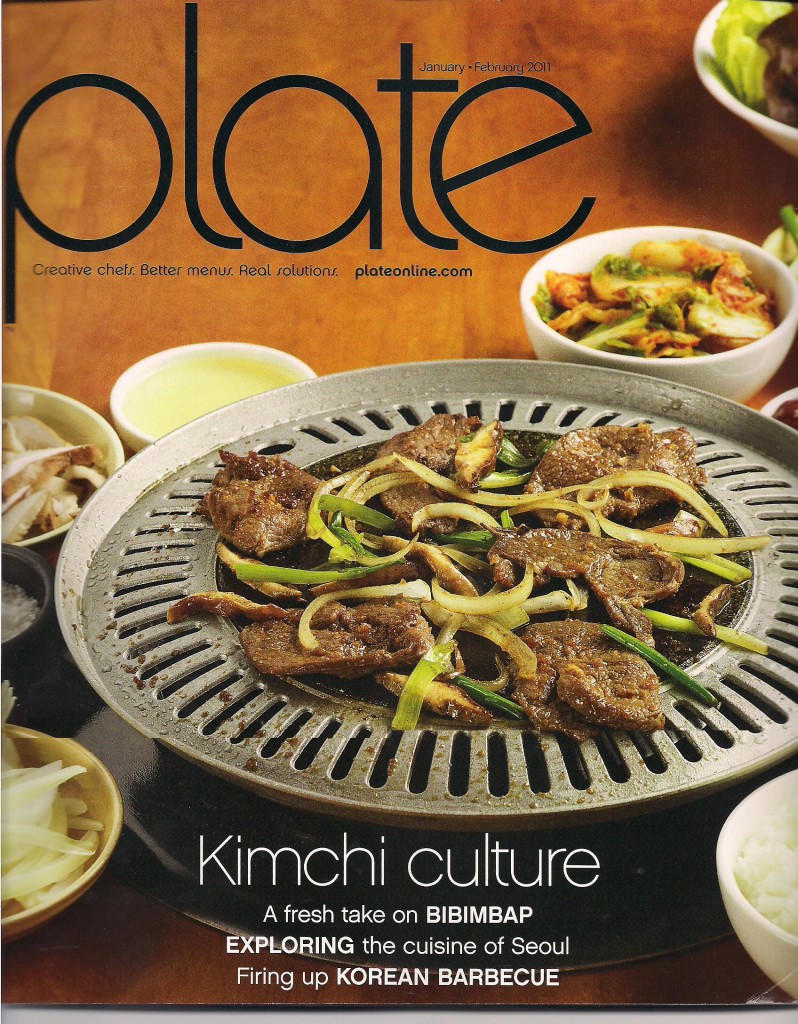 TAMMY: In late 2010, you and I were approached by Plate magazine to write articles about Korean cuisine for their Jan/Feb 2011 edition on Korean cuisine. My article for Plate was Korean breakfast culture (which I originally thought was a trick because old-school Korean cuisine makes little to no distinction between breakfast, lunch and dinner except for proportions), but once I spoke w/ the editor and got an idea where she was coming from, it was a fun article to research and write. It was another opportunity to interview some very talented, famous Korean chefs.
JOE: Yes, I’d say the Plate issue–all dedicated to Korean food–was the first major indicator that 2011 was going to be the big year for Korean food. I wrote the story on Seoul restaurant culture. It was my first article for a national U.S. publication.
I also pointed out that Indian cuisine was hitting it big in Seoul, and it sure did. Tapas are the thing now, and in a minor way, Brazilian and charcoal grilled DalkGalbi.
Other interesting articles around the web:

JOE: While doing a bit for SBS, I was able to document and figure out how a famous Nakji Bokkeum restaurant made their famous dish.

JOE: I started my stint on the morning show at EBS-FM, and on ZenKimchi we did March Mayhem again. Click here for the 2011 champion.

April was also significant in that we did our first experimental food tour, and it was a success–a precursor to ZenKimchi International, which starts in 2012.

My brother Chef Ben showed up in Korea for his second time, and we got to eat well in Andong.

Tammy, you maintained your obsession with yuja by posting a recipe for a Yuja Tincture, which received a lot of retweets and shares.

TAMMY: On a personal level, one of my favorite posts was our dueling opinion pieces about charging for banchan. My pro-charging vs. your anti-charging for banchan posts may not have gotten tons and tons of hits (or comments) but I think we should do these more often. Savvy readers may have discovered hints of our opposing political persuasions, too.
I also had a post that seem to bring out the trolls (on both sides of the Pacific), which was a recipe for tteokgalbi. I had an anonymous troll telling me that the Gwangju tourism websites and blogs were lying about tooting their own horn as the spiritual home of tteokgalbi.
JOE: Sure it wasn’t saeng cream cake lady?
May is the month when things really get going. Kimchi Chronicles premiered its first episode in New York. I helped judge the “Brew Your Hops Off” competition and tasted (and couldn’t help drinking) over a hundred beers.

TAMMY: The article that got the most reaction/comments (at least on its Koreafornian side) was the post I wrote about the Taiwanese blogger who got a jail sentence for calling a restaurants noodle dish “too salty.” The post didn’t get any comments on its ZenKimchi side but when I posted it on Koreafornian cooking, the comments section got quite crowded. I ended up debating with an anonymous poster who thought I was over reacting and over estimating the risks that food bloggers take when exercising free speech about the merits of a restaurant. You and I both took media law classes in college to get our communications degrees (and I was pre-law on top of of that) and we both know how little protection bloggers and writers in Korea really have and even writers in the States may have plenty of legal protection (on paper) but they have to have the $$ for the attorneys to defend it.
Our very different Top 10 banchan (yours is more seafood centric, mine is more vegetarian) lists attracted quite a few comments, too and my list on Koreafornian is one of my most popular posts.
JOE: Yep. I also started another new series on Arirang. We filmed in May and aired the first episode in June to coincide with the International Olympic Committee choosing Pyeongchang for the 2018 Winter Olympics. Filming and dubbing this show dominated my entire summer until October.
EBS-FM held its annual concert at Seoul Land, and I got to rip my shirt off onstage in a packed amphitheater and also sing and dance with Korean indie band Crying Nut.
10 Magazine’s big top ten burgers, pizzas, and wings issue came out. That was a tough one to work on.
I also like this video of my favorite restaurant in Korea.
http://www.youtube.com/watch?v=TiJiy_9-LiE
Summer 2011 was when Korean barbecue started really hitting America’s backyard grills. It got some more coverage in The New York Times. Just don’t eat any pig nipple.

TAMMY: Do you remember the hornet’s nest of food snobbery the Trader Joe’s Frozen Bibibmbap review stirred up? Yikes.
JOE: Something about how a food writer should only write about high class food? Well, that kills it for Anthony Bourdain, Andrew Zimmern, Sam Sifton, Ruth Reichl, Jeffrey Steingarten, and most everyone except Alan Richman.
This was the start of one of the worst rainy seasons in modern Korean history. Despite having some pajeon to help out, it was rough–including a landslide hitting our building while we were broadcasting.
This was also when the kimchi hit the fan for Korean powerbloggers when those scandals came out about how they were promoting bad products on their blogs without disclosing that they were being paid to.

TAMMY: What started out as small paragraph tucked into a long post by Seoul-Suburban about the neighborhood surrounding the  Noryangjin Fish Market, was the inspiration for the post that got the most hits of 2011 (at least on the Koreafornian side). It was a post I wrote inventing a recipe for Noryangjin-inspired Poktanbap (???) aka ‘Bomb Rice’ based on the description in the Seoul-Suburban post.
It went viral (on the Koreafornian side) thanks to someone who posted it on StumbledUpon. You discovered a few days later that they left out a couple of ingredients (coconut and walnuts) but it was still really good w/out them, IMO.

JOE: Jung Sik opened in Manhattan to mixed reviews by critics and raves from the internet. The government still made people scratch their heads with this sterile food tourism ad and by naming the Wonder Girls as Korean food ambassadors (remember the rose?). ZenKimchi was #6 in Friends Eat’s 2011 Best Blogger list. Also

JOE: Patbingsu Cupcakes. We find out that Korea invented pizza.

TAMMY: My second article for Yonhap “San Francisco cultivates kimchi as California cuisine” about 5 different kimchi makers all based in the San Francisco Bay Area.
http://english.yonhapnews.co.kr/culturesports/2011/11/10/34/0701000000AEN20111110001800315F.HTML
JOE: The Korea Food Expo takes place, and we find a lot of interesting things, including something pretty close to limes being grown on Korean soil. A sign of good things to come.

JOE: As we dreaded, the Wonder Girls came out with a music video promoting Korean food, and it ended up sounding like a Saturday morning PSA. Kim Jong Il dies. Not that it has much to do with Korean food (or lack thereof), but all the year end lists have to include that by decree. Shin ends the year by showing us how Korean rice cakes can be festive at Christmas time.

ZenKimchi International goes into business in 2012. We are moving into our first official office in Yeouido next week. Expect Korean food to become more popular, and expect us to cover it all–with ssamjang.