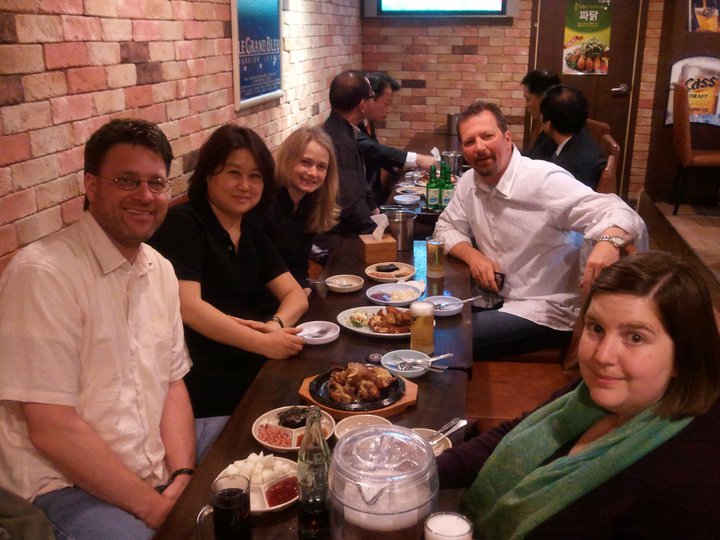 Since I first started the Food Journal, I have been talking about doing Korean food tours. Finally, we’re getting around to doing them professionally. We’ve assembled a great team, with Veronica Kang’s deep connections in the restaurant industry, Jennifer Flinn’s encyclopedic knowledge of everything Korean and my talent at–something.

We put together and executed a whirlwind tour with the culinary team from Illes Seasonings and Flavors, one of the major companies that supplies flavorings to the world’s largest restaurant corporations, like McDonald’s and TGI Friday’s. You can follow their Dine Around blog here and their Twitter feed. I hate to brag (okay, I love to in a passive-aggressive way), but all these government and private entities keep doing the talk of spreading Korean food around the world.

We set up a three-day tour to give an intense crash course on authentic Korean flavors. And the Illes team will bring them back to their home office, channel what they experienced, create authentic tasting Korean products and sell them to restaurants that reach everyday Americans.

But enough of the big talk. This was a lot of fun. Brant, JC and Aspen were troopers, keeping up with us amongst cultural overload and jetlag. The great challenge was accommodating the schedule to sudden changes in situation and our client’s desires. Jen, Veronica and I were well-enough versed in the dining and market scenes and had good ideas about what our clients’ palates were interested in to easily alter according to need. Yes, I was not expecting to change the itinerary to stop at Lotteria and have it be a hit, amongst other things.

We partnered well with Chef Hu-nam Kim at Star Chef and the folks at Food and Culture Korea, who work closely with Korea’s first lady on promoting Korean cuisine. Chef Kim gave the chefs the 2.0 version of the Noryangjin Fish Market tour that he had given Andrew Zimmern. F&C Korea’s Ellie Lee gave a great cooking class on Korean basics.

We went from the highest of cutting fine dining at Jung Sik Dang to a crowded smoky blue-collar barbecue restaurant to a peaceful tea room, where Jennifer gave her famous lecture on Korean green tea.

This pilot tour was a great success, and it turns out that we’re a great team. We’ll work on creating tours in the future that give you the heart of Korean food and culture in a fun unpretentious way. Stay tuned.

In the meantime, I’ve been playing with this app on my Galaxy S called Trip Journal. It records our routes, and I make little “waypoints” wherever we stop with pictures and notes. You can follow what we did during the past three days in the embedded files below. Please note that I don’t have the fish market in there because I was in the EBS FM studios working on a show and couldn’t be there to record the trip. But the Illes chefs have some good footage on their blog.

The GPS messed up a bit on the route during some parts.