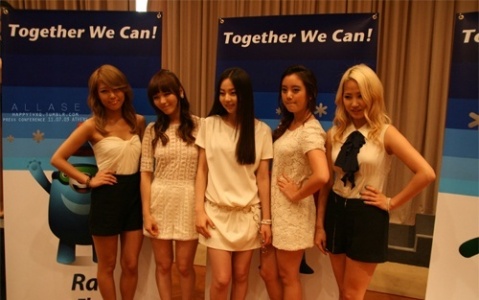 Some of you may be saying, “Wonder WHO?”

Unless you live in Korea or are a K-pop fan, you likely have never heard of them. The shorthand is that they are–were–big in Korea. But their manager, known as JYP, got a little cocky by the girl group he manufactured and brought them to the U.S. for a failed tour. But if you listened to the Korean media, you wouldn’t get that message. That’s okay, though, because they’re going to be ambassadors to Asian countries that they may still be popular in.

So, the Korean Ministry for Food, Agriculture, Forestry, and Fisheries has again picked another non-food-related celebrity as an international Korean food ambassador. I still don’t understand how effective these ambassadors are supposed to be. Not to toot our own trombone, but Team ZenKimchi has been having a little more success in promoting Korean food than any of these food ambassadors–writing in and appearing in international media. I even went to New York last year to promote Buddhist temple cuisine.

Again, this is just for a domestic audience. It’s also that tired marketing mindset here of associating one’s brand with the celebrity du jour, even though the celebrity brings no value to your product.

Yet my petty grievances was not why I posted about this, though I am petty and grieved–and petty again. It gets freakin’ surreal. For one thing, the Wonder Girls came up with a song for the campaign. I guess one of them learned how to write music? Or they just bought another track from Sweden (much of K-pop is actually written in Scandanavia and purchased by Korean producers).

Now here’s the funny part. Each Wonder Girl (the members change almost as frequently as Menudo) is assigned a specific food to promote. Here they are.

This isn’t the Hungarian powder. It’s a bell pepper. That’s not so bad.

I think this is the best choice of them all. It’s our favorite Yuja, as in Yujacha.

Yeah, not many people associate apples with Korea. But the variety (singular) that they grow here is nice and juicy. I like it, at least.

In my opinion, strawberries are an example of how Korean producers can take a good thing and screw it up because they don’t understand it. Each year strawberry producers brag about how large they make their strawberries. Yet anyone who knows anything about strawberries knows that the larger you make a strawberry, the more diluted its flavor gets. So Korean strawberries are large but taste like strawberry-scented water.

Read the rest if you wish.