If you read most Korean food blogs, they will tell you that Koreans don’t eat coriander, aka cilantro. They’ll tell you straight to your face that cilantro and Korean cuisine have never crossed paths before.

As the Ask the Korean blog reported a couple of years ago:

“Korea has never grown cilantro, and cilantro is not a part of Korean cuisine. …

But Korean people’s cilantro-hate is nonetheless interesting, because it is a nice reflection of Korea’s insularity.”

Based on my research, nothing could be further from the truth. I would submit to you that the insularity that Ask the Korean is lamenting has more to do with South Korea’s isolation from their brethren in North Korea (and from Korean Buddhist temple life) than from some kind of Korean culinary xenophobia.

North Korea’s culinary history is mostly hidden from view. Until a few years ago, Korean Buddhist temple cuisine was equally exotic and unknown to most people.

There are hints, if you know where to look, that cilantro does have a long history on the Korean peninsula.

The father of Joanne Choi of the Week of Menus blog was a native of Kaesong, a city located just north of the 38th parallel, which is now located in North Korea. Kaesong has a long establish culinary reputation in Korea going back to the days of the Goryeo Dynasty when Kasesong was the capital of the country.

“Cilantro, or [a] very very close cousin of it, exists in Korean cooking, and people are often rather surprised by the fact.”

Ms. Choi found out how difficult it can be to find North Korean recipes.

“I’ve searched in obscure places for the cilantro of his childhood in North Korea, which he states simply does not exist anymore, as it has been bred out of existence. The comfort food of his childhood, I simply haven’t had a chance to learn to make, and Kaesong, the province of my father’s childhood has produced very few cookbooks which can inform me of what I should be making for him. I’ve even hunted in Korean bookstores in KOREA to find these books, and the food of that province is seemingly tied up in the hands of few who know how to make the food well.”

Cate, the author of Caffinated Traveler, visited North Korea in 2008 and Kaesong was one of the stops on her tour.

“Unlike their southern comrades, the North Korean diet (Kaesong) seems to include coriander (cilantro). My guess is as a breath freshener????”

The Korean word for cilantro is 고수 gosu. That’s pretty simple. I have a theory about the Korean language. Koreans tend to transliterate words or concepts that are foreign to them. If cilantro was truly foreign, they would simply transliterate the word coriander or cilantro into Korean to describe the herb if they had never heard of it before. The fact that they have such a simple word for it is a clue that it’s been around for a while.

I found the core of this gosu kimchi recipe from a North Korean website — is blocked in South Korea — with a little help from these South Korean versions: Mori’s Garden Gosu Kimchi and Gypsy’s Gosu Kimchi. The North Korean site was the only one that gave me detailed measurements of the ingredients. 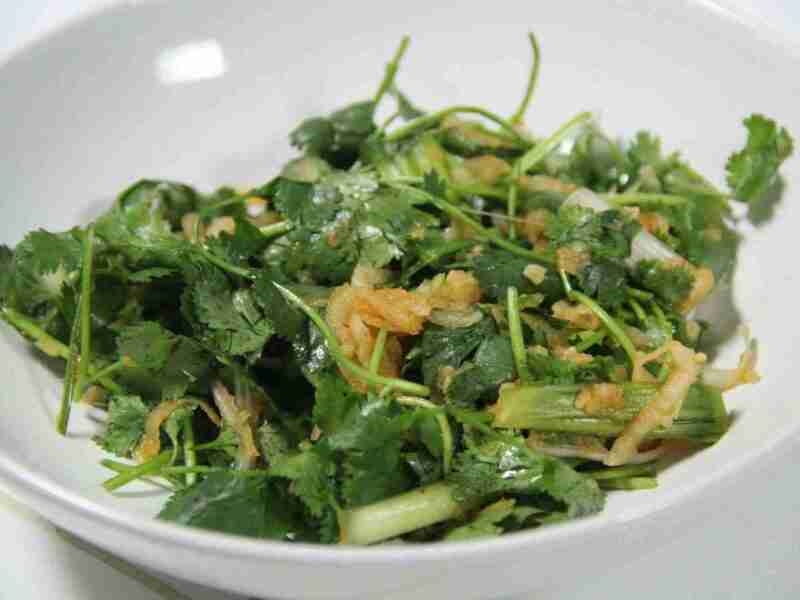