It’s an odd time to talk about jjajangmyeon, in mid-November when everything is about Thanksgiving dishes.  Yet we just eat normal, simple food that nourishes us and comforts us until that one big day.  Aren’t we all tired of hearing one more great idea for the Thanksgiving table anyway (which, I might still try to sneak in at the last minute ^_^)?

So I’ve decided to talk about jjajangmyeon today, because I think I can eat jjajangmyeon every day, any time of the year.  The oddity of this dish is that it’s one the most common people’s food, yet at the same time, one of the most celebrated dishes so many associate with special occasions from their childhood.  I sometimes wish I could survive on jjajangmyeon.  Ok, maybe I’ll go back and forth between jjajangmyeon and tteokbokgi (떡볶이; rice cake in spicy sauce).  Like so many other Koreans, it’s comfort food I don’t want to grow out of.

I found a comprehensive, entertaining article on jjajangmyeon from Essen (에쎈), a Korean food magazine, back in April.  You can see the full article in Korean here (“한국인의 소울 푸드, 자장면 예찬,” – Koreans’ Soul Food, Praise for Jajangmyeon).  Much of the information on jjajangmyeon here comes from that article, unless otherwise noted.

Jjajangmyeon started as ‘jakjang myeon’ (Korean pronounciation of Chinese Zha Ziang Mian) which means ‘noodles with fried sauce.’  It started at the dock of Incheon, a port city near Seoul (you may be more familiar with it as where ICN is located, the gateway airport to Korea).  In the late 1800’s to early 1900’s, during the period of active trade with the Qing Dynasty, dock workers loading and unloading trade articles were in high demand.

Many of the workers were Chinese people from Shandong area, and they brought their black bean sauce from home.  With that, workers were able to make a quick bowl of noodles reminiscent of home flavors, and soon jjajangmyeon carts started to roam around selling this easy meal option.

Then the new, mass-produced Korean version of the sauce appeared, with caramel sauce mixed in the original black bean sauce, which is what we’ve come to know as the base of jjajangmyeon sauce, or chunjang (춘장; black bean paste).  At the time a sweet taste was a rarity, this became something of a sensational new taste.  It was also a new, convenient option for Chinese restaurants in Korea since they didn’t have to make the base themselves.

While chunjang remained pretty much the same over the years, vegetable ingredients for jjajangmyeon have varied based on seasonality and price.  Many people remember potato cubes as a main ingredient from their childhood jjajangmyeon.  As you can imagine, potatoes played a major role in jjajangmyeon because they were abundant and cheap.  The increasing amount of onion has to do with Koreans’ general preference for sweeter flavor, in addition to extra sugar that goes into chunjang during cooking.  Also, lard was used to stir-fry ingredients and chunjang in the beginning.  However, a shift was made to use vegetable oil after a ‘shortening shock’ in the late 1980s, when the news came out that the industrial-grade beef fat was used in food, which led to the general belief that animal fat was bad.  The porky flavor is still there through added pork meat in the dish.

Jjajangmyeon is also an item in the effective living cost index, complementary to the Consumer Price Index, in which prices of essential goods for daily living regardless of income level are carefully watched over.  This shows how ingrained jjajangmyeon is in Korea, and it also explains why the price of jjajangmyeon would never increase dramatically.

In addition to the information on jjajangmyeon in the Essen article, jjajangmyeon signifies other meanings for various occasions.  One that I find sad yet funny is the ritual that is forced upon(?) singles on the Black Day on April 14th.  Just to give you a little background on the Black Day and related ‘holidays’ without getting into the legitimacy of these highly commercialized days, in short, Koreans celebrate the Valentines Day (February 14th) as the day of women confessing their love for their men with chocolates.  Then comes the White Day (March 14th), when the men return the favor with white, or mint-flavored candies.  What’s left out in these two celebrations are the singles who are to gather together on April 14th to commiserate their misery of singlehood by eating dark, gloomy black food, and what else fits that description better than jjajangmyeon (which I, and many Koreans, accept as not the most aesthetically pleasing dish)?

I want to address one more thing about jjajangmyeon before getting into a simple home recipe.  The National Institute of the Korean Language determined jjajangmyeon (자장면) as the standard spelling and pronounciation for the dish in 1986, but people never relented to it.  Only on TV, reporters would pronounce it as jjajangmyeon, but in the real world, people said it with the accented “jja” (짜) as in jja-jang-myeon (짜장면).  Finally, in August of this year, both 자장면 and 짜장면 were recognized as standard spellings.  As far as I know, there has been no study on why people have been so attached to the slightly stronger pronounciation, a nominal difference at best from the outside.  Yet, my guess is that sometimes people have such strong memory attached to a certain dish, they want to keep everything about it as they remember, including the pronounciation, from their childhood.  Yes, I also pronounce it as 짜장면 with the accented ‘jja’ but left the English spelling here as jjajangmyeon for…convenience on my part.

There are now many options of enjoying jjajangmyeon at home.  You can buy the 3-minute jjajangmyeon sauce pouch, which you can put in boiling water or in the microwave to heat up and pour over the noodles.  You can buy instant jjajangmyeon, packaged and cooked just like Korean ramyeon (라면; Korean version of ramen).  Personally, I consider these different noodle dishes with different tastes.  When I crave jjajangmyeon, I’m thinking of a big bowl of noodles mixed with glistening black sauce and the sides of kimchi and danmuji (단무지; sweet radish pickle, yellow or off-white).

Over time, my jjajangmyeon has become simplified, now left with only few ingredients that are essential to the jjajangmyeon flavor.  This, by no means, belongs to a health food category.  But once in a while, this does satisfy my cravings without much effort of going to a Korean-Chinese restaurant or spending much time on (trying) cooking an elaborate restaurant version.  Here comes my weeknight comfort dinner – simple, spicy jjajangmyeon. 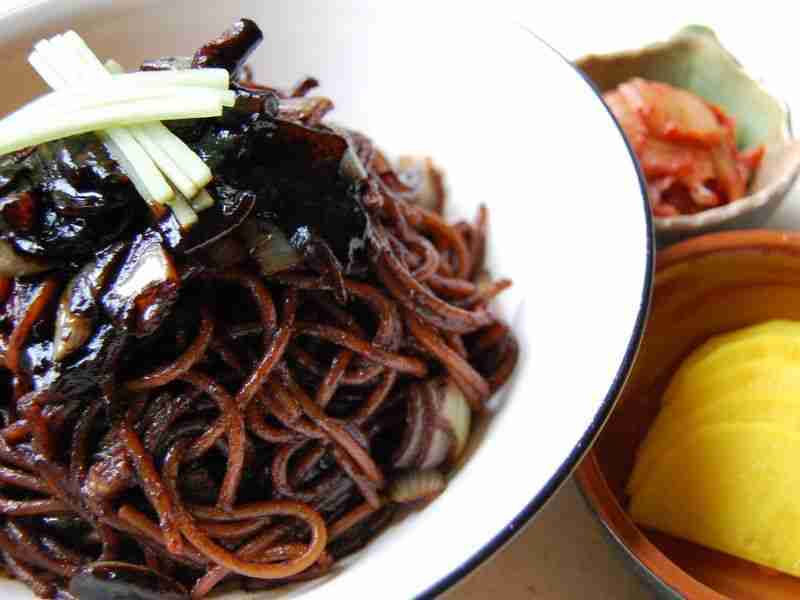