Recently, I joined a CSA (community-supported agriculture) farm affiliated with our local community college. Our CSA promises, “a share of whatever is ripe and ready to eat.” 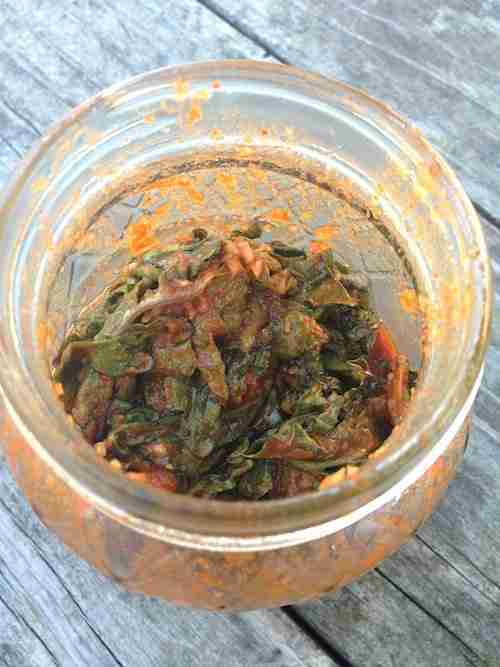 Much ado about kale? Try turning it into a very spicy, garlicky kimchi. (Tammy Quackenbush photo)

That share recently included a small bunch of kale. Hubby is not a fan of kale, and I have never cooked with it before. So I was at a loss as to what I could do with it — really at a loss.

Initially, I thought I would make kale chips with it, given how ridiculously expensive store-bought preparations are compared with the simplicity of the recipe. To make kale chips, you remove the stem, chop the leaves into large bite-sized pieces, smear them with a flavored paste then dry the pieces in a food dehydrator or at very low heat in an oven.

However, I didn’t have all the ingredients in my pantry for the several Asian- and Korean-inspired kale chip recipes I found. For the paste, one recipe called for almond butter and another, tahini.

Those aren’t in my well-stocked Korean-style pantry. So I decided to use ingredients from such a pantry to make kale 김치 kimchi.

The following recipe for kale kimchi was adapted from the Week of Menus blog. Mostly, I cut the recipe in half, because my CSA kale bounty wasn’t as large as called for in the original recipe.

Don’t like the taste or texture of kale? The bold spiciness and garlic of this recipe might cultivate a kale craving. And salivating over this “superstar vegetable” is a good thing, according to dietician Kathleen Zelman:

One cup of chopped kale contains 33 calories and 9% of the daily value of calcium, 206% of vitamin A, 134% of vitamin C, and a whopping 684% of vitamin K. It is also a good source of minerals copper, potassium, iron, manganese, and phosphorus. 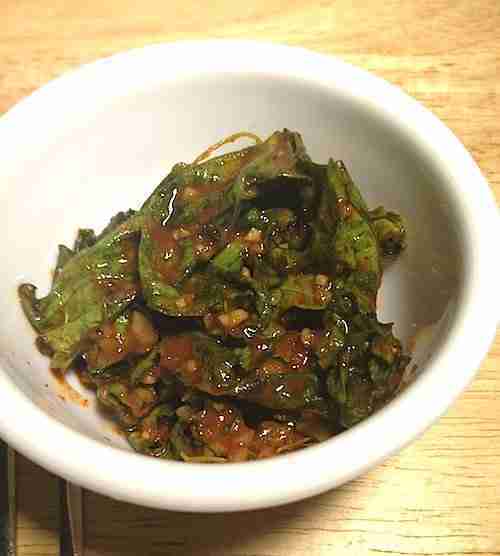 Wash the kale, trim the stems to the leaves and chop the leaves into bite-sized pieces.
Place the washed, chopped kale in a large bowl. Drizzle fish sauce over the leaves and toss them to lightly coat them with sauce. Set aside for about 45 minutes to allow the kale to wilt.
While the kale is softening, add rice powder, water and sugar to a small sauce pan over medium-high heat. Whisk and stir constantly, until mixture begins to thicken and bubble. Continue whisking for another minute after the bubbles form. Remove from heat and set aside to cool.
After kale has rested in the fish sauce and the rice flour mixture cools to barely warm, carefully drain the fish sauce in the bottom of the kale bowl into the rice flour mixture.
Finely chop a handful of garlic cloves by hand or in a food processor.
To rice flour mixture, mix gochugaru and finely chopped garlic, making a red paste. Mixture should taste salty, so add a bit more fish sauce, if necessary.
Using a spatula, mix the red paste with the kale, using a gentle folding motion, until all leaves are coated.
Pack the kale kimchi into a small wide-mouthed jar. Do not overstuff it; leave about 1/4 inch of space at the top for fermentation.
Leave the jar on the counter for about two hours.
Refrigerate the jarred kimchi. Periodically taste-test it for the level of fermentation preferred. Ours was ready in about three days.