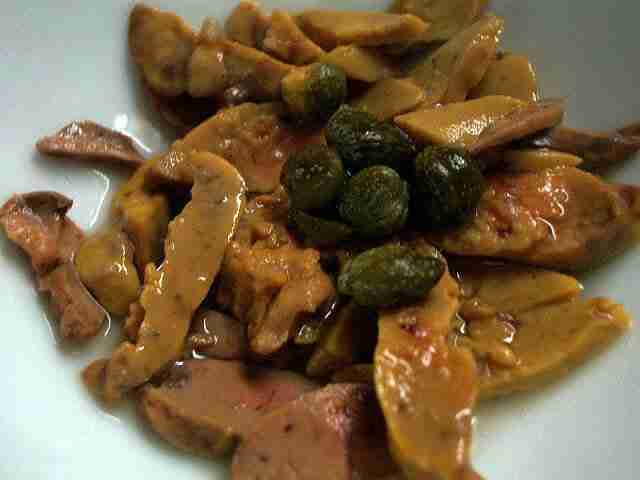 I can’t believe this actually turned out.

After asking in all manner of places, including the site itself, I decided to go all Korean with the monkfish. Considering the scope of this journal, that was an obvious choice.

I made three dishes:

I had no recipes for these dishes. Eun Jeong had never made any of them herself. So I was going on instinct and memory, breaking down in my head the components of restaurant dishes I’ve had. 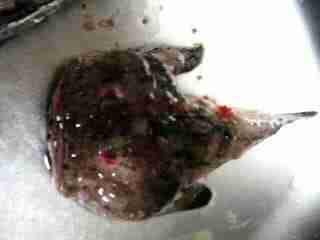 “Feh! Whatever. Leave me alone.”

What are you hiding underneath? 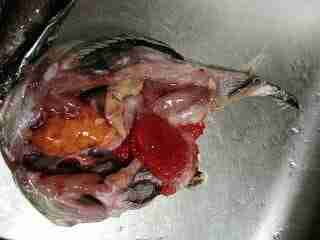 Ooh, some nice goodies. I see the yellow-pink liver on the left (“The Foie Gras of the Sea”) and that bursting red roe sack on the right. Since you’re a small fella, there’s not that much liver to work with.

Luckily, you have friends. 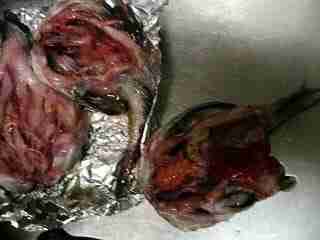 Okay, guys–girls–um, this is weird. Since you’re not using those livers anymore, I’ll gently remove them with my sharp little knife. 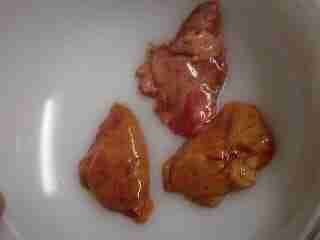 There! Done. That didn’t hurt, did it? Of course not. You’re dead.

Now, what to do with these morsels? I’ve never had monkfish liver before. It’s called ankimo in Japanese and is considered very valuable in sushi restaurants. I haven’t heard much about Koreans eating them. So this is the least Korean of the dishes–Monkfish Liver Sashimi.

After rinsing them (there was a lot of slime on the fishies), I placed them in a mesh strainer. 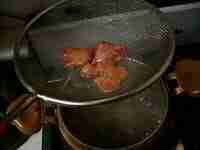 I steamed them over boiling water with the lid on for less than a minute. 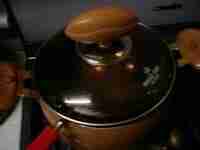 And they were done. 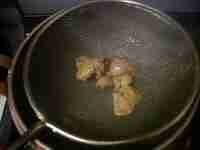 I rinsed them again under cold water to calm them down.

The next thing I did was slice them thinly (very sharp knife for that) and put them in the tiniest bowl in the house. I didn’t spend much time on arrangement.

To bring out the flavor, I sprinkled a little mirin and yuzu juice and garnished with some capers. 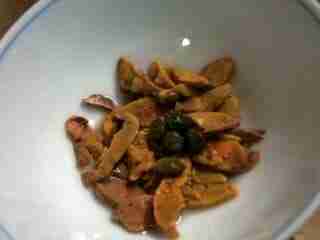 Simple little appetizer. They were silky smooth and had a sophisticated tuna flavor. The yuzu did wonders for it.