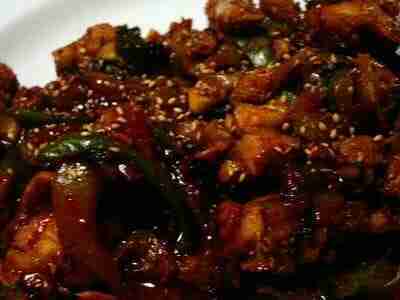 And now, Thelonius gets to shine. 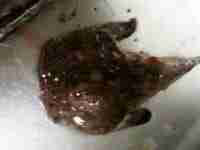 This was my first time preparing monkfish, much less cleaning it. I found a few tips on the Internets. They helped a lot. 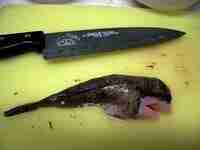 After thoroughly rinsing it, I placed it on the cutting board. Tracing the contours on the back of its skull, I removed the tail from the head. 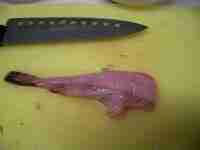 Then I peeled off the skin. Once you get it started, it’s easy to do. It peels right off. I then took some scissors and clipped the tail fin and the two other bony fins. Beyond that, I couldn’t figure how to debone the fish. When I’ve had Agu Jjim before, there were bones still inside, so I just cut the fish into chunks. 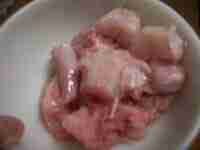 All three of those little buggers gave me this much meat. Well, that was enough. 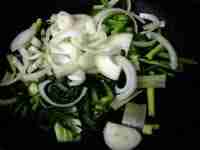 Totally playing this one by memory of the one previous time I’ve eaten this (birthday dinner, February 27th 2005), I started sauteeing on high heat some sliced white onion, leeks, sliced garlic, and strips of green pepper in a pan with olive oil and sesame oil. Traditional Agu Jjim also has a lot of bean sprouts. I didn’t have them in the fridge at the time, and I honestly didn’t miss them. 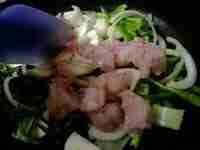 In came the fish. 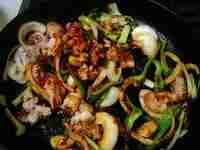 Then around one or two tablespoons of gochujang ê³ ì¶”ìž¥ (Korean red pepper paste) and a teaspoon or so of gochugaru ê³ ì¶”ê°€ë£¨ (Korean chili powder). Stirred it around. 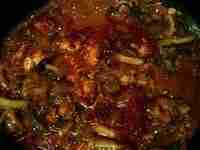 I then added a smidgen of water (maybe half a cup) to make the sauce. Reduced the sauce over high heat while it penetrated the fish and veggies. 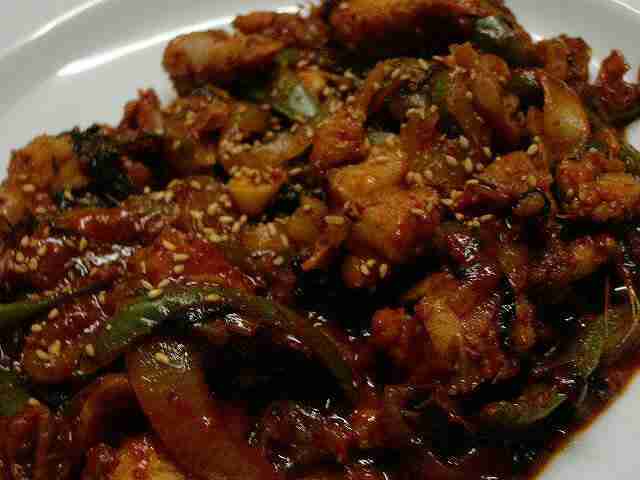 When the sauce looked deep and rich, I served the Agu Jjim immediately with some toasted sesame seeds sprinkled on top.

This honestly tasted better than the Agu Jjim I had on my birthday. There were bones in the fish, but they weren’t too much of a distraction. The fish tasted great, even though I’m not a big fan of the swimming kind of fish (shellfish are another matter).

So that whole meal of the Agu Jjim, Al Tang, and Monkfish Liver Sashimi came from three miniature monkfish which cost a total of 5,000 won ($5) and whatever was in my fridge. I wonder how much this would cost at a nice restaurant, especially the monkfish liver.

I’m glad I did it. I’ve become a little more comfortable working with fish. This wasn’t as disastrous as the last fish, which continues to go undocumented on the journal.