I bought the Korean version of Bae Yong Joon’s best-selling book, The Journey to Discover the Beauty of Korea. I got the book because I knew there would be several Korean food recipes tucked in the pages. I got excited when I found his recipe for Kalbi steak so I decided I would work translating the recipe into English (ahead of Bae’s forthcoming English version) and also test out the recipe to make sure the ingredients and methods would work in an American kitchen.

Even though the kalbi recipe excited me (and my family) the most, there are other noteworthy recipes in the book as well, including Bae’s mother’s personal recipe for cucumber kimchi (page 67).

My first step in translating this recipe for American audiences was to try to make sure I got the correct cut of beef rib. The picture Bae included is a spartan shot of the finished kalbi steak on a plate. It did not look like the chopped up beef ribs one usually finds in the grocery store for braised ribs. It also didn’t look like the wang kalbi style that one finds all over Korea and at higher end kalbi restaurants in the USA. Bae’s recipe does not use the thinly sliced LA style kalbi ribs like those featured in my own Kalbi video on YouTube.

I took my book to the nearest butcher. I showed him the picture in Bae’s book and asked him what kind of beef rib was in the picture. He was adamant that Bae’s kalbi steak was made with Beef Plate Short Ribs.

These ribs are a much thicker cut than I’ve ever seen in Korean cuisine. I bought four plate ribs and brought them home. Each rib was 8-9 inches long and over an inch thick. There’s no way that these behemoth ribs are the same thing as Bae’s photo but I tried to make them work within the specifications of Bae’s recipe. These ribs could have been a stand in for T-Rex ribs in a Flinstones movie.

Fortunately, the marinade was much less dramatic and traumatic.

Bae’s kalbi steak recipe is divided into three parts: First he lists the ingredients for the kalbi steak marinade. Then he provides a recipe for the Hyang Shin Jeup sauce (향신즙) which is then mixed into the marinade. At the end, he gives instructions on how to cook the ribs.

Here is my paraphrase of Bae Yong Joon’s Kalbi Steak Recipe. My comments are in parenthesis. I double checked my paraphrased translation of this recipe with my local Korean grocer to make sure I understood the recipe.

To prep 3-4 flanken cut beef ribs, you need to score them approximately a quarter way down to the rib so the beef will not contort while boiling or grilling. 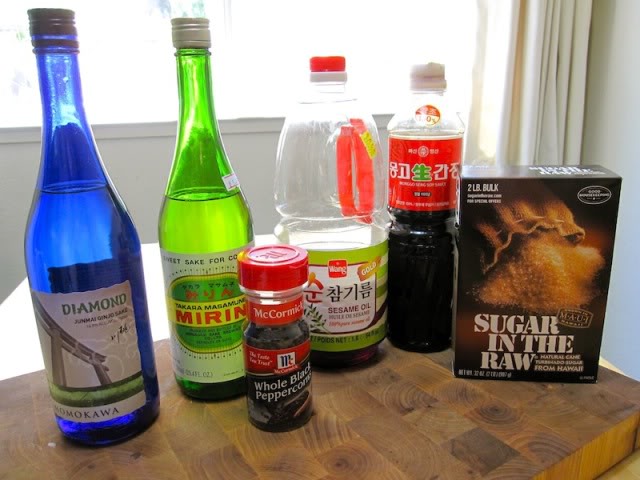 How to make the Kalbi Steak Marinade 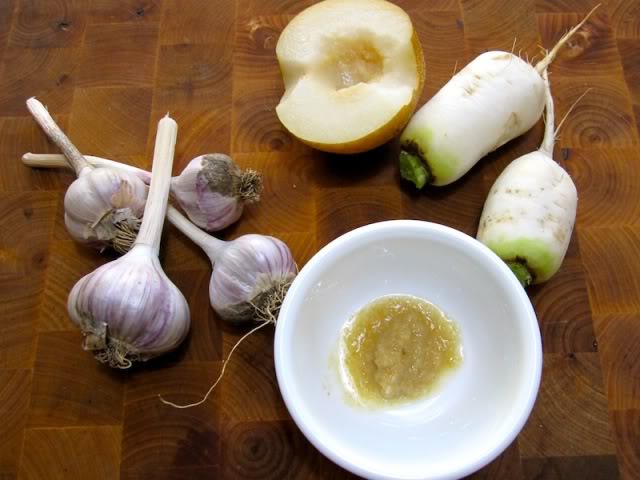 Grate the radish, pear, garlic and ginger. (I did it by hand but a food processor or a juicer will do the job, too). Strain in fine cheese cloth (or a fine mesh strainer). Add to the marinade.

How to pre-cook and marinade the ribs

1. Put the ribs in cold water and rinse off the blood.
2. Cook the ribs for 2-3 minutes in boiling water. Pull out the ribs and allow them to cool down before putting the ribs in the marinade. Marinade all day until you are ready to grill or broil the ribs.

Here is where I ran into real problems. Bae recommends pre-boiling the ribs for about 2-3 minutes in boiling water and then pull them out, allow them to cool down and put them in the marinade all day until you’re ready to grill them.

I ran into a lot of problems very quickly

So I went back to the drawing board, throwing out the counsel of my well-meaning, non-Korean butcher. I went online and found a page called The Zen of beef ribs and reached an epiphany. Bae has been using flanken ribs all along but he wasn’t using the skinny cut common to LA Kalbi. He was using a thicker cut of flanken ribs. So, I went back to the butcher and ordered up 4 flanken cut beef ribs, approximately 1-2 inches thick. 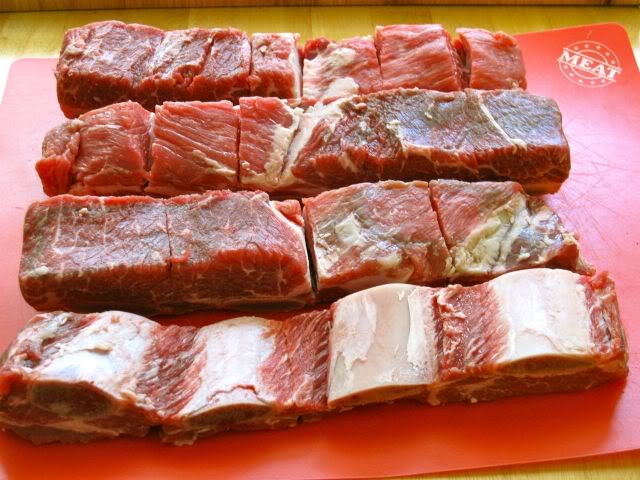 The right beef rib, an English cut flanken rib. Trim off most of the visible fat but you do need to leave some on while it's cooking.

Bae mentions scoring the ribs so they will broil evenly.  This is fine on the top but there’s another step you must take to make sure the ribs do not shrink and contort while grilling. On the backside of the ribs, you’ll find the silver skin, but it is not an edible or tasty silver lining. You must take your sharp chef’s knife and remove the silver skin from the ribs. If you do it right, the silver skin will come off in one strip. 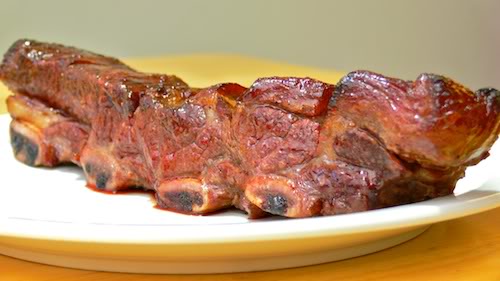 The final product with the right cut of rib.

This time the recipe worked out very well. I baked the ribs at 375 for about 45 minutes to an hour to get them medium well and I was very happy with the results. Since the recipe includes natural sugar from the Asian pear as well as some granulated sugar, you will have some charring, which is unavoidable if you cook the ribs to medium well or well-done.

The ribs got rave reviews and my family are already begging me to make them again.