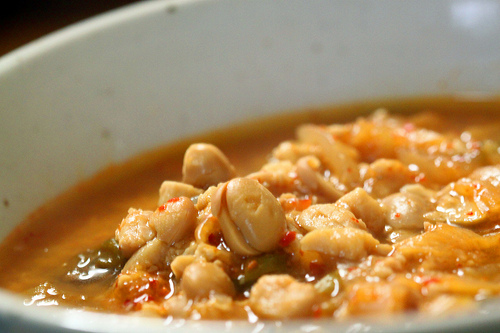 It’s been years since I’ve been allowed to cook Cheonggukjang Jjigae in the house. Actually, I’ve never been allowed to cook it since EJ and I moved in together in 2006. She actually wasn’t a fan of it until this past year when I started getting back into ordering it when we went out for lunch.

This is the famous “dead body soup” that was on Bizarre Foods. It’s not called that, but there’s an urban legend that Koreans in Germany made it in their apartment, and their neighbors called the police, fearing there was a dead body in the apartment because of the smell.

I’ve not only gotten used to the smell, it really gets me going. It’s as rustic Korean as you can get. Barely crushed soybeans that have just started fermenting. They haven’t had time to mellow into doenjang. The taste reminds me of pinto beans as a kid.

In markets they market it by its freshness, sold in disc-shaped cakes or in small tubs like yogurt. In fact, you can make your own Cheonggukjang in a yogurt maker. Someday I may tackle that project.

EJ has been houseridden much of the time because the baby’s so young. She’s been depending on me to shop for groceries, but it’s hard to figure what you want when you’re not in the store. Her diet has been super boring. At least the MiyeokGuk stage is over. It was only in this state of desperation that I was allowed to cook some Cheonggukjang that I had brought home. EJ loved it, and now I’m allowed to cook it in the house.

I had written a recipe for this in the early days. It’s been revised a bit. 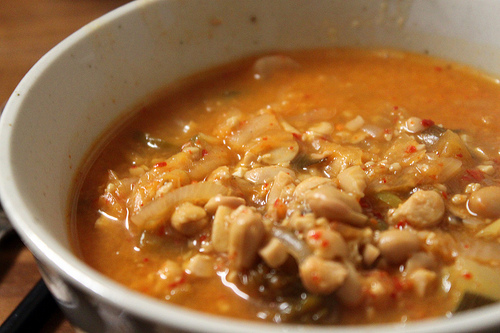