I’ve had it up to here with E-Mart. Their motto seems to be “If you want it we don’t have it.” Lately, this four-story megamarket has been out of butter. They have two aisles of freezer dedicated to mandu, which I rarely see people buy. But butter has been one of those things that gets sparse there.

This past week I checked, and they were out again. But they did have some heavy whipping cream for half the price of its equivalent weight in butter. Good. There’s my solution.

The next morning, I churned some butter in the time it took for my waffle iron to heat up. It tastes loads better than store bought butter though its texture is a little crumbly. But what’s great is that I got buttermilk as a side product, which I used to make my waffles. 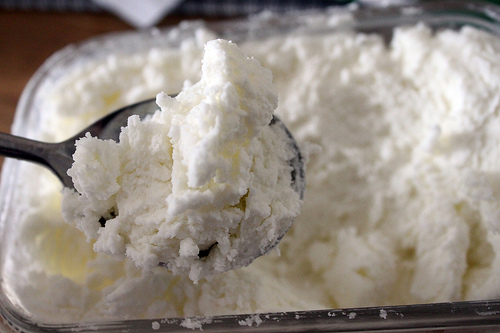 INGREDIENTS
1 carton Heavy Cream (I use 생크림 from Seoul Milk–caution because some of them are already sweetened)
1 tsp. Salt

The butter should last as long as the expiration date on the cream carton.