From the Vaults: Agriculture Ministry is Officially NUTS 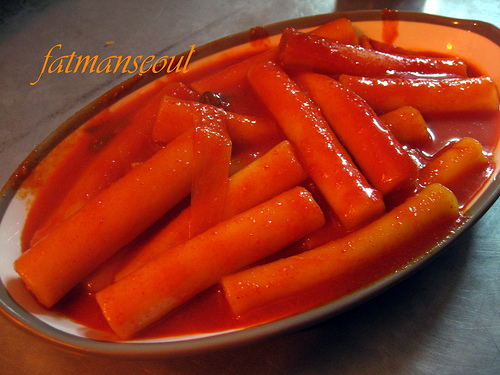 You thought Dokdo Is Ours was exagerrating with its fake column by the Korean agriculture minister?

Well, this story (via Brian in Jeollanam-do) takes the (rice) cake!  Changing the name of the street food dish ddeokbokki 똑보끼 to topoki 토포키 to make it more accessible to foreigners.

[Lee Yeo-ram, a researcher at the center] said the Korea Rice Foodstuffs Association and the Agriculture Ministry have already begun to discuss changing the official name to topokki, and having the new official name registered in Webster’s Dictionary. The research institute will spend 1.2 billion won ($810,000) annually to research tteokbokki culture and develop new dishes, the association said. Five researchers now work at the center, and the number will increase to 16. The local market for the snack is estimated at 900 billion won, according to the rice growers’ group. The institute will help boost local and export markets and increase rice consumption, it said.

This is not a joke, even though the Agriculture Ministry is increasingly becoming one itself.  Yet it has all the necessary features of an archetypal Korean government/corporation grande scheme:

As with the silly campaign for kimchi, why is the government so intent on exporting foods that are already in short supply in Korea?

And changing the name of ddeokbokki?

Well, my friends, welcome to the first meeting of the Ddeokbokki Preservation Society.