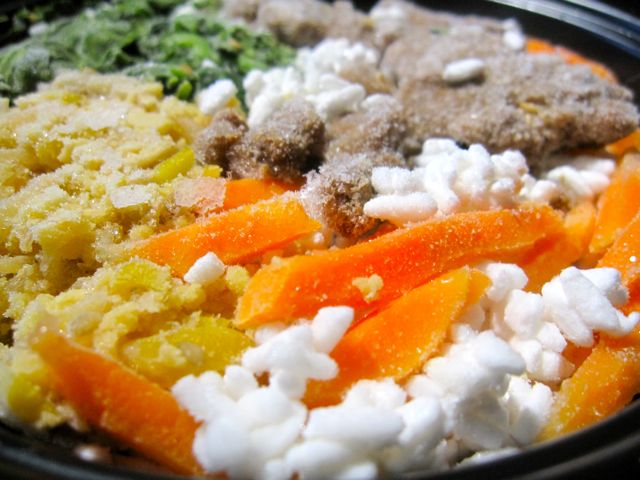 This is what it looks like before it's microwaved. The bright orange carrots are a promising sign. (Tammy Quackenbush photo)

The lastest of several prepared Korean dishes introduced recently by Trader Joe’s, a Monrovia, Calif.-based chain of grocery stores, is a frozen version of 비빔밥 bibimbap.

This “mixed-up rice” dish — the meaning of the Korean name — already has created some Twitter and blog buzz over the past six weeks.

I stumbled on the following Twitter reviews of the meal:

TJ’s bibimbap bowl should not be as tasty as it is.

Aurynyumi (@laurynyumi) wrote this after taking a bowl with her for lunch: 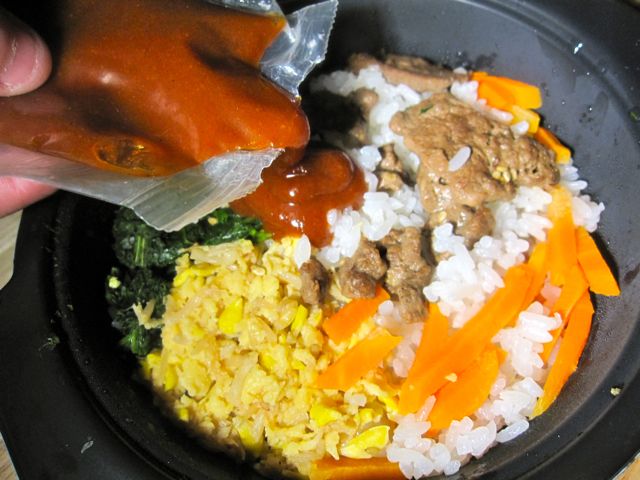 Once the sauce reaches room temperature, it's easy to dispense. (Jeff Quackenbush photo)

The spicy chili sauce had a good balance of spiciness and sweetness, leaning towards the sweet side. Yet it tasted more like Thai sweet chili sauce than the sweetened 고추장 gochujang (spicy red pepper paste) sauce commonly poured atop bibimbap.

The cooked spinach flavor was different from the marinated blanched spinach usually used in bibimbap.

The sesame oil flavor, one of the key flavor profiles of Korean food, also was lacking. It’s listed among the ingredients but isn’t as bold in the final product as is in the fresh-prepared version.

At first I thought the dish didn’t have soybean sprouts, another common ingredient in bibimbap. The sprouts were listed on the package but weren’t a separate item in the ceramic bowl-resembling plastic container. I finally found the sprouts “hidden” among the scrambled egg.

To improve the flavor, I stirred in a half teaspoon each of sesame oil and doenjang along with the spicy chili sauce provided in the packet. That little nudge improved the experience.

Another options comes from emiglio (@emiglio) who gives this advise

I’ve realized you can eat pretty well out of Trader Joes frozen section if you dice fresh onions/mushrooms/garlic into everything.

Trader Joe’s frozen bibimbap bowl does not compare to what you would find in a restaurant or make at home. Despite that, the grocery chain’s version has come close for those days when you don’t have a long enough lunch break to visit your nearest bibimbap restaurant while you’re at work.

Trader Joe’s also released frozen kalbi and bulgogi dishes recently. I plan to scrutinize them for you soon.