BIFF Square gets its name from the Busan International Film Festival. This annual film festival is one of the most prestigious film festivals in Asia. BIFF Square was the original location of the BIFF, which started in 1996. 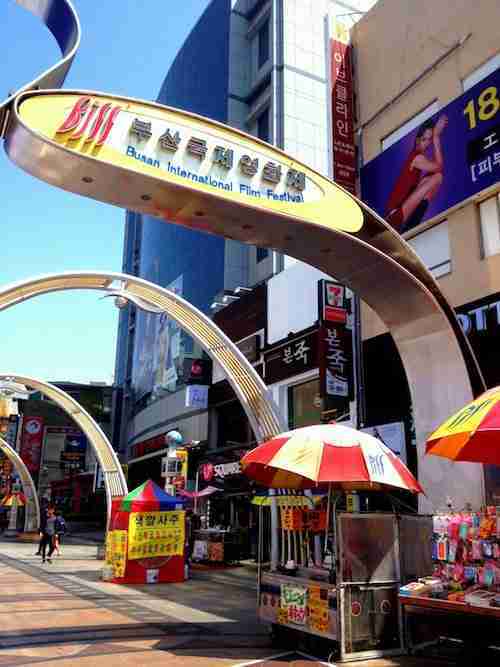 Although BIFF Square no longer plays hostess to the prestigious film festival — it was moved to the newly built Busan Cinema Center (영화의전당) in 2012 — the square is still a busy place, lined with a wide variety of shops, movie theaters, movie paraphernalia and lots of street food stalls and restaurants.

After arriving in Busan from Daejeon during our recent tasty tour of Korea, Hubby and I scouted the square one weekday mid-morning with a profound craving for some 호떡 hotteok. Thanks to the Internet, we knew there’s something special about the hotteok sold at BIFF Square food stalls.

Like the child of a doughnut and a cinnamon roll, hotteok starts out with a base of wheat flour, water, milk, sugar and yeast. After the dough rises for a few hours, golf-ball sized lumps of dough are filled with a mixture of brown sugar, honey, chopped peanuts and cinnamon. Then it’s fried on both sides to golden brown and piping hot.

Most hotteok stands will set them aside and serve as-is. Buyer beware of the sticky, hot, sweet cinnamon syrupy filling. 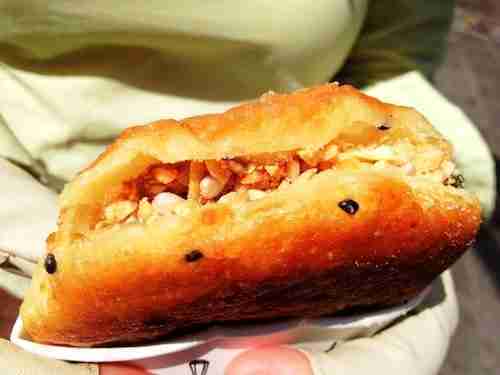 However, Busan-style hotteok, called ssiat hotteok (씨앗호떡), or “seed hotteok,” brings a bit more to this street treat. A regular hotteok cake is cut from the side about half-way down and stuffed with a spoonful of pine nuts, sunflower and pumpkin seeds.

Deep fried dough generously stuffed with nuts, seeds, sugar and cinnamon is always good eats. The additional seeds and nuts may give the illusion of healthiness but who eats hotteok for their health?

BIFF Square is pretty easy to find. It’s in the same neighborhoood as the Jagalchi fish market and Nampo-dong shopping area.

Directions: Take subway line 1 to Jagalchi Station. From station exit 7, the plaza is a five-minute walk.