There’s an indoor waterpark at Anyang Art Park. It’s been sporadically open over the years. It looks like it got new owners and was christened Anyang Waterland this past June, complete with Disney fonts. I wanted to have some type of swimming experience with Jian. It’s never too early to teach your child to swim. When I found that this was open again, it became a mission.

Last weekend, EJ and I needed to buy new swimsuits, so we did. I looked at the bargain bin and picked my swimsuit in under a minute. EJ took a few more hours. It was raining all weekend, so we didn’t go, even though it was an indoor waterpark.

Yesterday, we decided to make the trek there. I remember Chris Patch took his daughter there a few years ago. He said that it was annoying all the kids who were bothering them because of their foreignness. Thankfully, this was not the case this time for us–well, except for some creepy ladies wanting to play with and touch Jian while we were waiting for tickets.

We got there at 2:30, but they have special discount tickets starting at 2:45, so we waited. The waterpark was in the basement levels. After receiving our wrist keys, we went down to the second basement to change. The changing rooms are at the end of a narrow corridor opposite from the elevator, so there was a traffic jam of people the whole way. Not the most efficient set up.

The lockers were electronic. Just touch the button on the wrist key to the hole on the locker, and it zips open. Korean swimming pool culture turns the simplest of activities into unnecessary complexity. I rinsed off in the shower and changed into my swimsuit. I also put on a hat because you’re required to wear a swim cap or something on your head in the pools. I’m glad they were lenient enough to let us wear baseball caps. It didn’t want to dress up like a big white penis with a swim cap.

Speaking of which, I still can’t get used to the locker room nudity thing, even though I did go to an all-male boarding school. It was so damn crowded, and all these little pee-pees were lazily bouncing around in these massive hair jungles. They looked like the noses of some freaky Muppets. Nonetheless, made me feel more confident about myself.

Jian and EJ eventually emerged from their locker room. EJ was already harried from dealing with Jian. She refused to wear her cap. I was looking down at the pools, and it looked like the swim cap rule wasn’t being enforced, along with other rules that had more common sense, like running on the wet surface.

We didn’t want to wait for the elevator again, so we walked down the stairs. EJ asked for this ticket she gave me before entering the locker rooms to get Jian a life vest. I couldn’t remember exactly where I had put it. Maybe in my pants? So I trekked all the way back up, down the trafficked corridor, through the penis noses, to my locker. It wasn’t there. I then remembered I had put it on the outside pocket of the bag. So I walked through the forest, down the corridor, down the stairs, and met them again. Found the ticket. Jian and EJ went to get the vest. I went to claim a chair. I had seen some that were unclaimed while upstairs. But it looks like in that moment of going back for the ticket made me miss the last free deck chairs. Nothing was available. Every surface was taken over. EJ didn’t feel safe having the bag out, even though there was nothing valuable in it beyond beach towels. So I had to take the bag, go up the stairs, down the corridor, past the noses to put the bag away. I went through all that again and met them again.

Okay. Jian needs to use the potty. EJ started to take her and found it was a false alarm. We decided to just go in and swim. 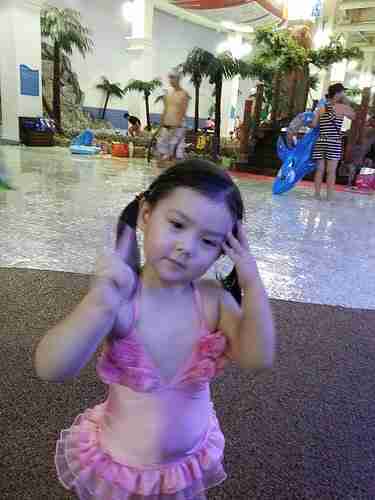 I hadn’t mentioned that since this was a completely enclosed two-story basement with highly clorinated, likely over-chlorinated pools. It was like a chlorine gas chamber. The air circulation was almost non-existent. I could see corrosion already starting on the steel beams above. This building doesn’t have a long life ahead. 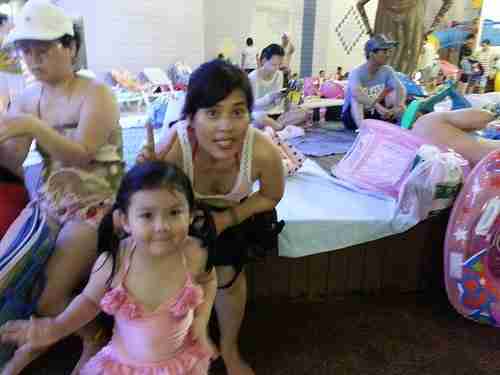 EJ and I both wanted to do the lazy river. EJ didn’t have a vest or inner tube, and she can’t swim. So she walked the whole way around. Jian was freaked out the entire time. She was screaming and begging. So, I guess this wasn’t the best thing to start off with.

I tried the kiddie pool next. It had a play island with a slide in the middle. But we didn’t get that far at all. I sat just inside the edge of the pool, trying to calm Jian down. She was standing up but still scared.

We went to the snack area. EJ got Jian a corn dog, me a beer, and herself an ice coffee. Jian devoured the corn dog, every last bit. I talked to her more about swimming.

I changed the semantics from swimming to “playing in the water.”

After eating, we went to the wave pool area that didn’t have any waves. I may also mention that no pool went over six feet. Another way that fun is surgically removed in Korea. Then again, judging by the life vests worn by children and adults, there aren’t many Korean swimmers, despite the country being surrounded by water on three sides.

The wave pool was where we should have started with Jian. The edge slopes like a beach, so Jian can wade in as deep as she feels comfortable. She was nervous at first, but she eventually got to splashing and jumping in the water. She liked running out to me, and I’d get deeper each time. She finally said she was having fun. EJ was having fun too. She popped into one of the hot tubs every now and then.

The chlorine was starting to get to us now. EJ’s eyes hurt, despite never really entering the water. My head was starting to pound. She still wanted to give the lazy river another try. One of the staff members said they had special inner tubes for people to use for free. She didn’t have any on hand but found one sitting around and gave it to us. We went to the entrance to the lazy river. EJ was nervous. She had never floated in an inner tube before. So I was getting ready to show her when Jian had a potty emergency. EJ and Jian went to the bathroom. I thought I’d use this opportunity to make a circuit around the lazy river in the inner tube.

When I returned, I met EJ and Jian. A young woman was talking animatedly to her. It turns out I was using their inner tube. So I gave it back. EJ chased her down to explain that a staffmember gave it to us. We didn’t steal it on purpose.

EJ was getting up enough nerve to go down a slide. She said she wanted to. We went to the slide area. They had just opened them up again. But EJ had meant the slide in the kiddie pool.

She was too scared to do the big slides. There was one fast slide and one covered curly slide. She told me to do one. I climbed the stairs. It was a fast line. I went down, and it was pretty fun. There were little colored gels in there that made it look like a space tunnel. I slammed into the water fast. Retrieved my hat. Exited. I had fun.

EJ and I agreed it was time to go. We were hungry, and the chlorine gas was ridiculous.

In the locker room, my key didn’t work. A man next to me helped me out. Got a staff member. Turns out this isn’t an uncommon occurrence. The keys break regularly. I didn’t bother to shower because I didn’t want to close my locker again. I changed and left.

EJ and Jian showed up a good time after. We took the elevator back up. EJ had to do something with her hair in the bathroom. Jian was interested in the candy machines, so I broke a W1,000 bill and let her get some suckers. I put them in the bag for later. We exited and went around the Art Park resort area.

I had been trying to convince EJ to come out here again for a while. She hadn’t been out here since our first year living together, even though it’s basically right next to us. She said she was bored last time. Pictures say differently.

There are many interesting restaurants in this area. Many specialize in duck. But having just exited a pool situation, I was in the mood for BBQ or seafood. I was craving fried fish and shrimp, like a po’ boy. But it occurred to me that in Korea we have great grilled fish. I suggested grilled fish to EJ, and she agreed. We walked around a bit. All three of us were tired. We turned around to walk back to the main resort area. EJ saw a sign advertising grilled fish at the outdoor restaurant I’ve gone to the past two times I had gone to the Art Park. I went there last year with baby Jian for some bindaeddeok.

I had also realized I hadn’t returned my wrist key to Waterland. So I sat them down. I asked EJ to order some bindaeddeok and dong dong ju while I’m gone. I went back and returned my key. Back at the restaurant, we settled down. Jian was sucking on a lollipop. The booze and bindaeddeok came out. 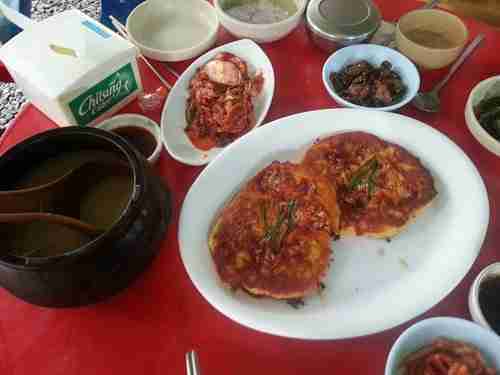 EJ particularly liked this dong dong ju. It had a sweet burnt rice “nurungji” flavor. She drank more of it than I’ve seen her drink in years. 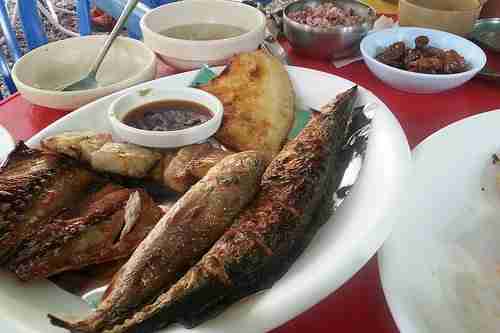 The fish platter came out with a large variety of specimens, all good. EJ ordered one and then two bowls of purple rice. Jian ate all over her bowl, along with a lot of fish. She walked around under the tarp the whole time. That was fine. As long as she ate.

The sun set, and we enjoyed a nice summer evening.