My first destination on a mid-May 10-day tour of Korea was the city of 대전 Daejeon, more than two hours south of the Incheon airport by express bus.

I had never been to Daejon before, so I did a little research about this city’s reputation. Many of my Korean friends and acquaintances gave me literal and virtual blank stares when I asked about Daejeon’s culinary commendations. My local Korean grocer thought for a long time before answering, “Acorn jelly?”

I discovered Daejeon is a transportation hub, including KTX high-speed rail, between Seoul and Busan.

Daejeon also is the Silicon Valley of Korea, as a number of high-tech companies have research facilities there. KAIST (Korea Advanced Institute of Science and Technology) is also based there.

Given that uninspiring native cuisine scene and the long trip to Korea and to Daejeon, I looked for a comfortable hotel that included Korean-style breakfast. It also had to be close to the wedding hall where a friend was getting married in a couple of days — the great excuse for a return to Korea.

I didn’t expect to take home any lessons about Korean cuisine from Daejeon, but I was very wrong.

Lesson 1: Traditional Korean breakfast in a Korean hotel — or anywhere else — is harder to find than you expect.

You wouldn’t think it would be hard to find a hotel in Korea serving a Korean-style breakfast, but it was difficult. Western-style breakfast items can be less expensive and labor-intensive, so I’m not surprised that many hotels no longer offer Korean breakfast. That’s to the chagrin of hanshik (Korean food) promoters, who under the previous Blue House administration pressured some high-end hotels to resurrect their Korean restaurants.

Ironically, I found what I was looking for at a Japanese hotel franchise, Tokoyo Inn Hotel, which has a branch in Daejon.

Lesson 2: The early bird gets the tasty food.

What was breakfast in Daejeon like? Tokoyo Inn served breakfast every morning from 7–9:30 a.m. This is what we found. 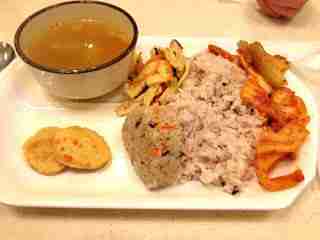 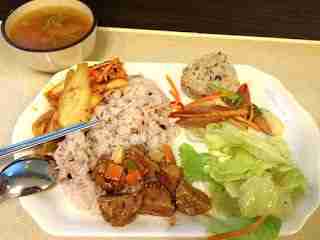 I enjoyed both meals. Served buffet-style, they were as nutritious and filling as personal tastes would allow them to be. The samgak joomukbap was made with rice, mixed with finely minced carrot and sesame seeds and coated finely with sesame oil. The kimchi was on the fresh side — crunchy and with a little kick.

Lesson 3: Sometimes, it’s OK to stick with what you know.

Tokoyo Hotel also offered a Western breakfast buffet, but it was quite dull and nutritionally lacking in comparison with the Korean and Japanese options: sliced white bread or croissant rolls with butter and jam, coffee and a punch-like kiwi or pineapple juice.

One doesn’t to be a nutritionist or a dietician to figure out which option provides a better balance of carbs, protein and fat to get you through the morning.