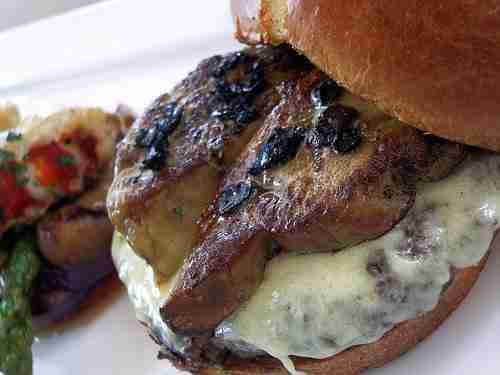 [NOTE: Pictures with the watermark “Fat Man Seoul” were taken by Jennifer Flinn of FatManSeoul.com]

And you know what? I don’t care.

How much leg do I need to show?

It’s not like this site is pulling in the millions. It has to be good for something. And besides, if The Amateur Gourmet can do it, so can I.

A while back, I snarkily pointed out that a hotel in Korea had entered the luxury burger wars. This was started by Daniel Boulud with his DB Burger, which went for a mere $32. Now, you had the option, during truffle season, to top the burger with $150 worth of truffles, but we won’t go there. He got a lot of publicity for this, and other establishments noticed. Here’s a quick rundown of other luxury burgers out there:

It’s become a worldwide trend, and some have grown tired of it. When the W Seoul Hotel Walker Hill announced their 180,000 won creation, I said it was just a publicity stunt.

It sort of was, admits Executive Chef Ciaran Hickey. Yet it also has become fairly popular. They have sold over 100 burgers since it came out three months ago.

Who goes for this stuff?

Really, all types of people. Businessmen. Casino goers. Men impressing their dates. Chef Hickey even tells the tale of a family of four, two parents and two teenagers, who ordered one each.

So, how did I get mixed up in this?

It was that snarky post from a few months ago. Luxury hotels have people who scope the news for mention of them to keep track of their publicity. Chef Hickey himself found ZenKimchi while surfing the web, and sent me an email that made me fall out of my chair.

Lesson: sniping from a keyboard can sometimes get you free stuff.

You know, I think the BMW 2009 6-Series Convertible is way too much show and not enough substance. Only morons would buy such a vehicle.

We’ll see how that one goes.

Chef Hickey told me to invite a friend. Eun Jeong was going to go, and I wish she did. Her excuse, “I don’t like foie gras all that much.”

So I brought along the infamous Jennifer Flinn of Fatman Seoul, she of the evil demeanor and great camera.

To get to the W Hotel, we went to Gangbyeon Station in east Seoul and went out exit 1. At the first crosswalk, we went diagonally to the far side, where a free shuttle bus to Walker Hill runs every ten minutes.

At first, we walked into the wrong building, the Sheraton, which is on the casino side of the complex.

“Jennifer, I think we may be in the–ooh! ADHD conference! What was I saying again?”

The Kitchen, the restaurant that serves the X Burger, is after the first door on the right in the complex. We were greeted by Chef Hickey and Mr. Moon at the front of the restaurant. We were also running a bit late for lunch.

“I thought you weren’t going to show.”

The hostess sat us down windowside with great sunlight and an amazing view of South-of-the-River. Then it hit me what we were doing. 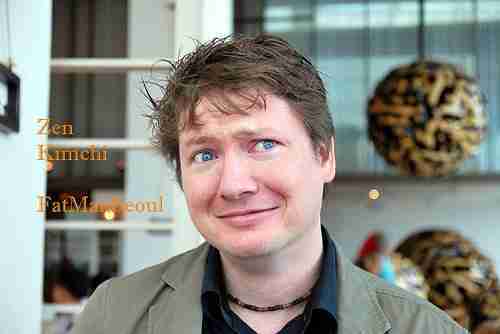 What if I start eating the burger and forget to take pictures?

We were served some sparkling water, and Chef Hickey joined us. 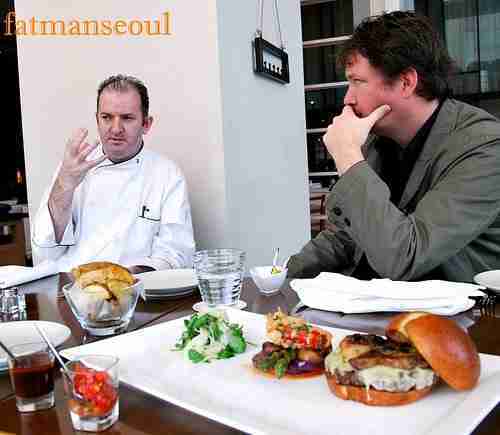 Chef Ciaran Hickey has one of those backgrounds that means you’re going to eat good food. He’s worked at The Pierre in New York and had made a name for himself at the Four Seasons Istanbul before coming to Seoul around a year ago.

Even better, he’s an obsessed foodie like the rest of us and has a fascination with Korean street food. The idea for the burger came from management after they tried one of the ones overseas. Chef Hickey’s kitchen was already playing around with the idea of taking a fast food staple, like pizza, and tarting it up for the restaurant. He himself had tried Daniel Boulud’s burger and wasn’t impressed. He wanted to make something better. 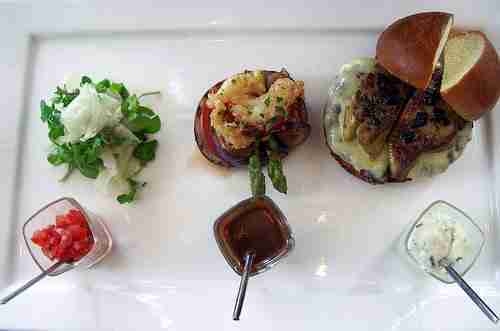 It is a monster. Let’s break it down, shall we? 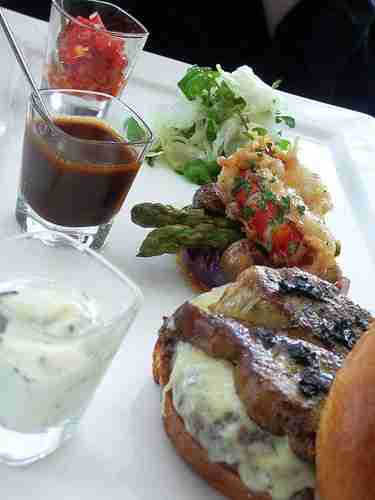 Now, I’m trying to remember all the elements, so forgive me if I’m a little rough on the accuracy. There was so much going on there. First, the big meat. 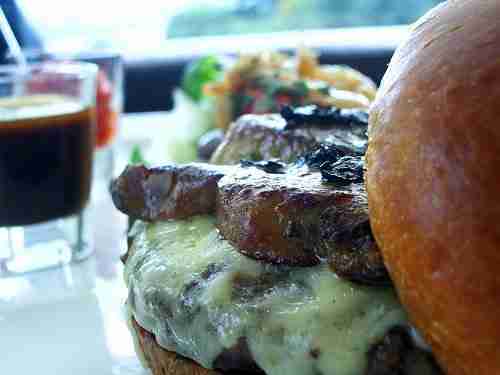 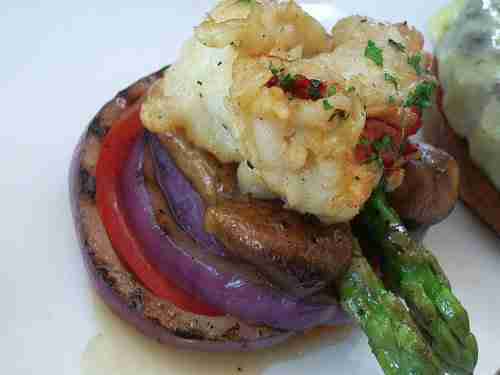 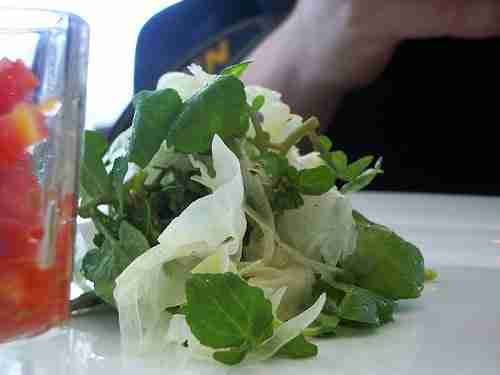 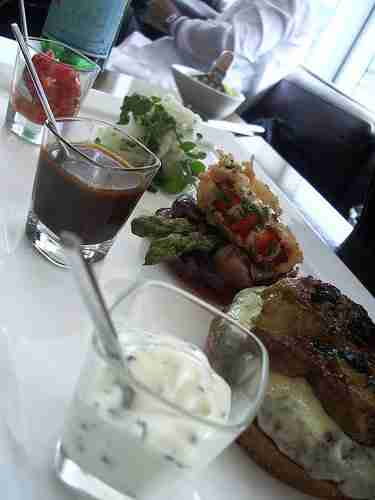 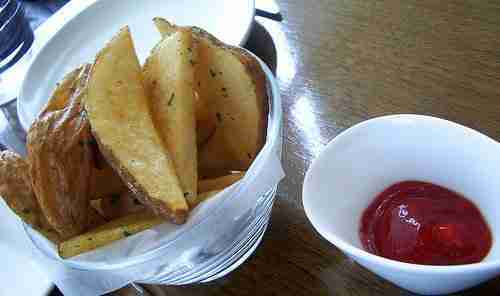 Oh, and it also comes with fries. 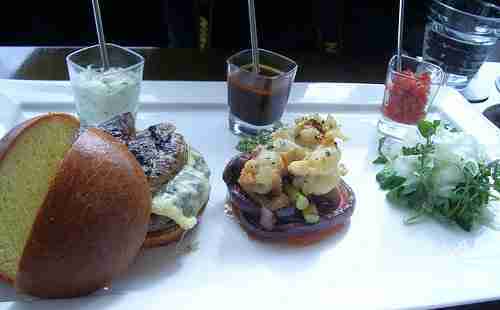 Chef Hickey said that diners have different ways to eat the burger. Many eat the elements separately. He himself prefers to eat the meat part as a burger and dip the lobster in the truffle aioli. 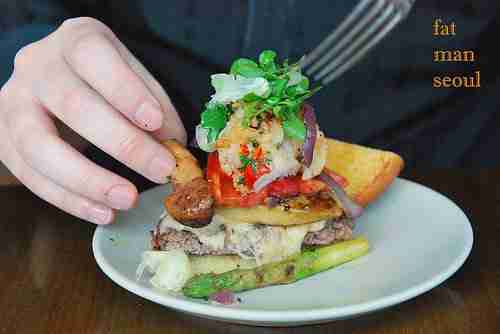 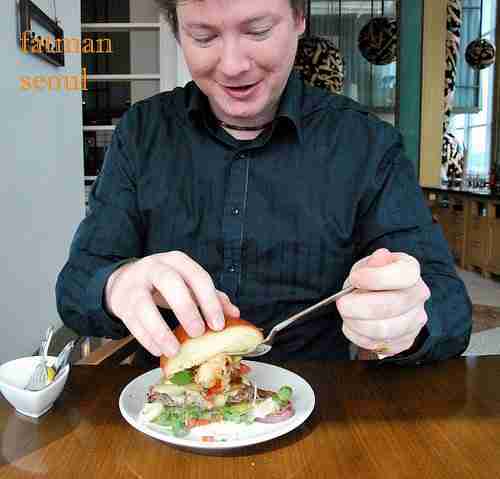 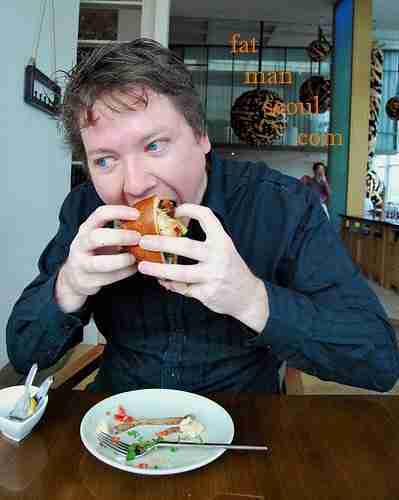 Okay, that was messy. But, in my opinion, the best food is always messy. 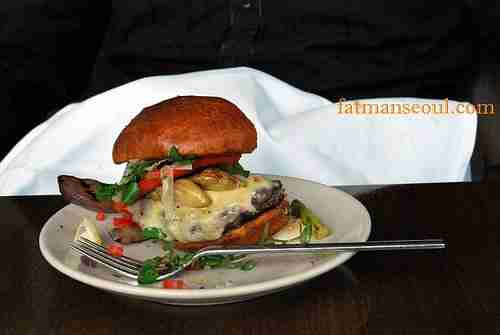 Taking a bit of everything together was a sensory overload. The beef and foie, combined with the truffles and dark truffle sauce pushed this dark, earthy meaty, um, “flavor” is too cliche. Can I use “smack” here? The foie gras made me think of Christmas. It tends to do that for me. Then there’s the bouncy texture of the lobster which contributes brightness with the tangy watercress and fennel. The pine mushrooms rounded it out with more meatiness on the sweet side.

So, you know what? Even though it’s such a monster, it balances. The salad rescues the burger from being too heavy.

Yeah, it’s a task to wolf down a 180,000 won burger, with it all falling out of the bun–a nice bun, I must add. So I wussed out and picked up a fork and knife to finish it. Chef Hickey was right. The lobster with the truffle aioli I could eat every day. I could top my cereal with it.

I played with my food, trying out different combinations and watching Jennifer have oral orgasms with the foie gras on her half of the burger. And you know what, Jennifer having oral orgasms can be a scary sight to the uninitiated.

When I finished the meat, I used pieces of the top of the bun to dip in the sauces and nibbled on the remains of the salad.

Man, I’ll have to save my money up and try that one again. Chef Hickey said it was a meal for two, but I could eat two whole ones myself. Nonetheless, that half burger stuck with me for almost the rest of the day. I wasn’t hungry for at least six hours after that. From half a burger!

Oh yeah, it may also be from Chef Hickey ruefully suggesting, “Would you like to try the dessert buffet?” 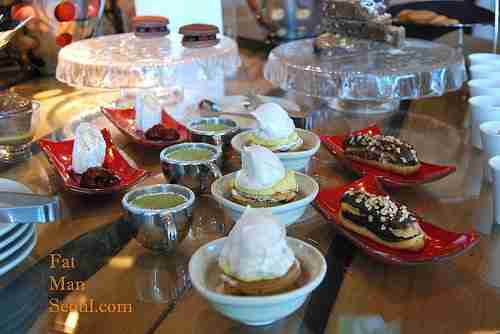