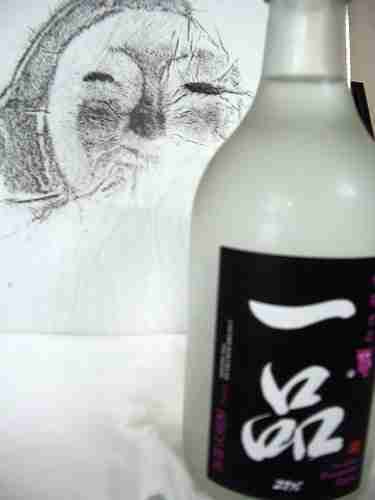 You think you know soju?

I thought I knew soju. It’s cheap enough in Korea to become easily acquaintable. I can only drink it when I’m in the mood for it. I recently did some more research on soju for an article I wrote for SEOUL Magazine, and I became simultaneously repulsed and intrigued.

What repulsed me was that most cheap commercial soju — the stuff people usually drink — is not distilled. It’s pure grain alcohol mixed with flavorings and watered down. That explains the hangover factor.

Yet the real distilled stuff is more expensive and not as widely available. Most of it comes from the little city of Andong.

I heard that Andong soju has a kick. As a result, it sat in the refrigerator for a while, waiting for that special occasion when I would have the inkling for a stiff drink.

That inkling occurred last weekend. I opened it and poured it into a traditional soju glass (not a shot glass). The aroma was flowery and clean.

My goodness. It’s not that bad.

The taste was clean and complex. It was a little sweet — not sugary sweet — like a mild fruit with a buttery finish. It had more similarities to sake than it did to green bottle soju. It was a lot stronger than sake, and I think it would also be useful in cooking.

Now that I’m learning to like the real stuff, I’m gonna have to take a trip to Andong to try it straight from the source.

This is still one of my favorite sojus. I can’t stand the green bottle crap. It’s not real soju. It’s pure grain alcohol distilled from whatever cheap source possible. Then it’s mixed with water and artificial flavorings.

In the 1960s there was a rice shortage. Dictator Park Chung Hee banned rice from being used to make liquor–except in the Andong region.

I guess they forgot about it because that ban wasn’t lifted until 1999. By then you had a generation or two brought up on the green bottle swill. Modern Koreans won’t go back, and many don’t appreciate, the original stuff.

I say that, but it’s changing. There’s a small movement to revive traditional liquors. I still enjoy a good Andong soju. Some people love Hwayo, but I’m not a big fan of the guy behind it. It’s way overpriced. Their barrel aged stuff costs more INSIDE KOREA than imported single malt Scotch. It’s good, but it’s not THAT good.