The restaurant was nearly empty when we sauntered in at 1:45 p.m. on a Sunday afternoon. Two men were engaged in an animated conversation in a Chinese language at a table on the opposite side of the restaurant, their words echoing off the walls and the mirror that stretched the length of one side of the restaurant and over the din of the sports color commentators on the big-screen TV. 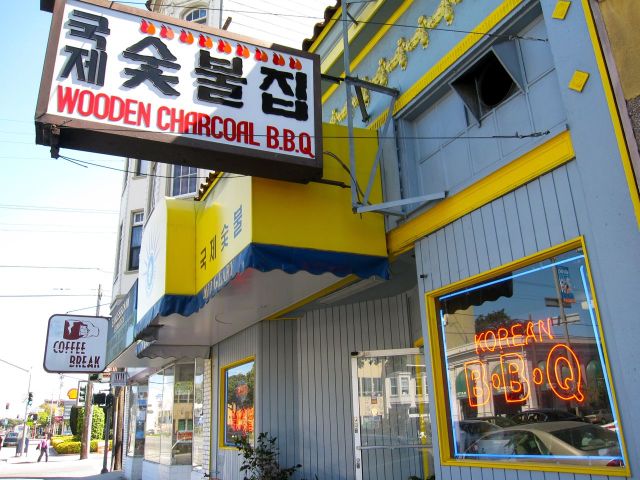 Because of the name of the restaurant, we ordered broiled 불고기 bulgogi and broiled barbecued chicken (닭구이) from the lunch menu, which bundles the items with 밥 bap (rice), 반찬 banchan (side dishes) and a bowl of soup. Both entrees were $9.99 each. 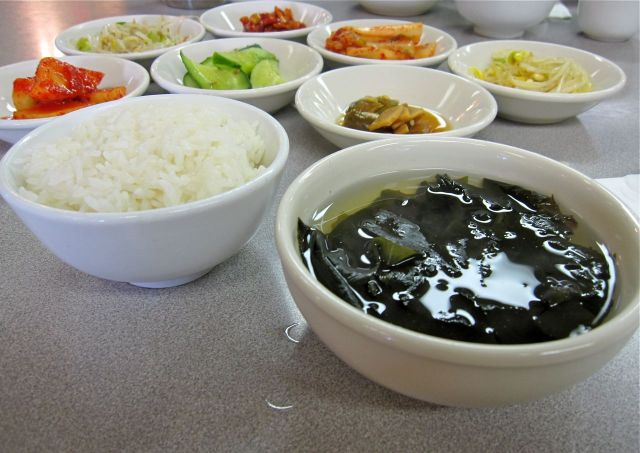 The banchan were typical Korean restaurant fare: baechu kimchi, lightly pickled cucumbers, marinaded soybean sprouts,  marinaded mung bean sprouts, soy sauce–brined jalapeños, and two kinds of daikon kimchi (one was fresh and the other was made from dried daikon). They were tasty but not surprising. 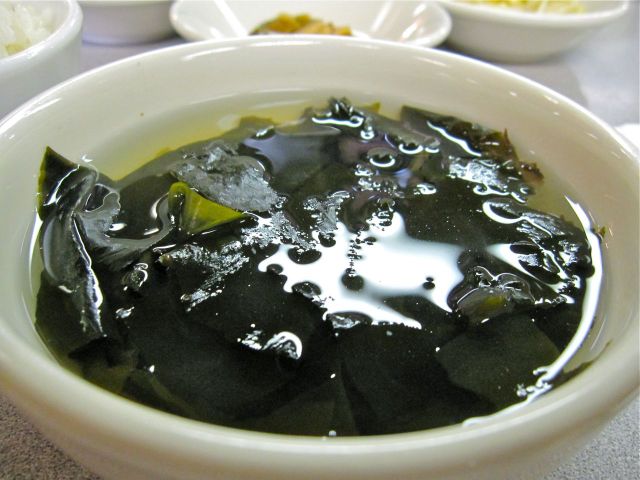 The surprise for us were the small bowls of 미역국 miyukguk, which is a Korean seaweed soup made with wakame in a simple broth. Of all the soups in Korea’s culinary repertoire, few are more Korean than miyukguk. I have to give the restaurateurs credit for serving such a bold, unusual dish to a couple of non-Koreans, since many non-Koreans are still somewhat squeamish about seaweed in its leafy form.

Korean women recovering from childbirth are served this soup morning, day and night for the first couple of weeks after giving birth. Some Korean women are also compelled by well-meaning relatives to eat lots of it leading up to childbirth, since is it believed to purify the blood and help women with lactation.

The waitress set the bowls down, I looked at my husband and said “Happy Birthday,” though neither of us have a birthday coming. He doesn’t like seaweed in soup or 김밥 kimbap (sushi).

“It’s good for me, right?” he asked me while stirring the leaves and looking skeptically into the bowl. He ended up liking the flavor of the soup.

The service was prompt. The waitress took our order shortly after we sat down and brought the banchan, rice and soup within a few minutes. The bulgogi and grilled chicken arrived a few minutes after that.

The bulgogi was quite dry, and the smoke flavor from the real wood oven was pronounced. We dipped the meat in the miyukguk and wrapped it in moist rice, which helped.

The chicken, however, was moist, the “special house sauce” more obvious than on the bulgogi, and the smokiness more subtle.

It is easy to find from Highway 1, commonly known as 19th Avenue, a major north-south thoroughfare on the west side of the city. If you’re traveling north on 19th Avenue (coming north from San Francisco International Airport and San Jose on Interstate 280), turn right on Geary Boulevard. The restaurant will be on your right between 10th and 11th avenues.

Making left turns on a number of streets of San Francisco is difficult. If you are traveling south on Park Presidio (from Napa-Sonoma wine country and the Golden Gate Bridge), you can’t turn left onto Geary. Travel a block south of Geary, turn right onto Anza, turn right at 14th Avenue then turn right a third time, onto Geary

This restaurant is worth the hastle. Parking is available along Geary or side streets.

Geary Boulevard has a string of Korean shops, grocers and restaurants. Wooden Charcoal BBQ is about a block away from longstanding Korean barbecue master Brothers Restaurant and several blocks from the Korean establishments in Japantown.