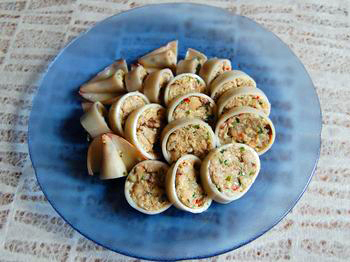 Usually sundae/soondae (순대) refers to blood sausages in Korea, commonly made by boiling or steaming cow or pig’s intestines filled with a variety of ingredients.  It can be one of the most popular street food with the basic ingredients of glass noodles and pork blood (and the intestines would likely be replaced with cheaper sausage casings) or a shared dish offered at restaurants with fancier stuffing ingredients like perilla leaves (깻잎; ggaenip) and sweet rice (찹쌀; chap ssal).  Although somehow this Korean blood sausage has gotten an undue reputation for just being what it is, other blood sausages – such as boudin noir from France and boudin rouge from Louisiana of the U.S. – seem to be going about their ways just fine.

But I digress.  Back to sundae.  There are other kinds of sundae reflecting regional specialties.  There is myeongtae (명태) sundae I’ve only heard about, steamed pollack filled with stuffing, originated in Hamgyeong Province of now North Korea.  Ojingeo (오징어; squid) sundae comes from Gangwon Province, the east coastal province known for cold, blue water and beautiful Sorak Mountain.  Squids are filled with stuffing of chopped up tenticles, vegetables and meat or sweet rice (찹쌀; chap ssal).

The dish takes two big steps and only about 10 minutes of steaming and another 10 minutes of resting time.  One is cleaning the squid and the other one is making the stuffing.  I have measurements below so that you can get an idea of ingredient ratios, but take note that it all comes down to the number and size of squid you’re using. 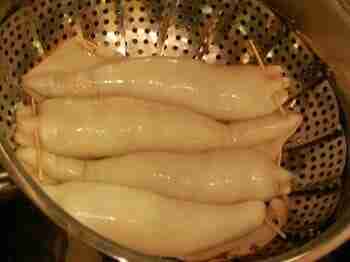 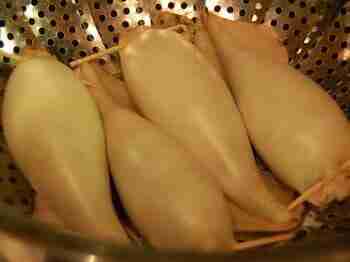 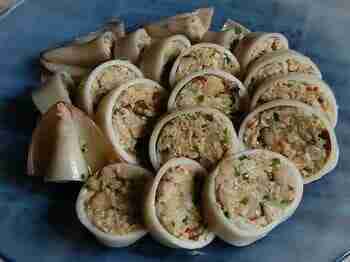 Making the Stuffing) Soak 3 dried shitake mushrooms in warm water for about 30 minutes until they become soft.  In the meantime, cut 3 stems of garlic chive to small pieces.  Squeeze excess moisture out of 1/2 cup of firm tofu. Grate 1 clove of garlic, finely chop 1/2 of red chili (don’t forget to wear gloves for this!) to get about 1/2 teaspoon.  Cut a small onion to small dice to get about 1/2 cup.  Squeeze out water from soaked shitake mushrooms.  Discard the stems and cut the mushrooms to small dice.  Combine all of the above ingredients thoroughly.  Taste and season with salt and pepper, slightly saltier than your normal seasoning.

Mix in chopped up tenticles from 4 squids and 1/2 cup of ground beef to the vegetable mix.

Assembly and Cooking) Get the steamer going by setting up a steamer and turning on the stove to boil water.

While water is heating up, fill the squid body tube with the stuffing.  Add about 1 teaspoon of flour for each squid in the body tube and gently shake it to coat the inside.  This will help keeping the stuffing and squid together after cooking.  Carefully add the stuffing and seal with a toothpick.  Repeat the process with the rest of the squids.

Once water comes to a boil, add the filled squids in the steamer and cover.  Steam for 10 minutes or until the squid color turns opaque white.  Take out the squids and let them rest for another 10 minutes so that the stuffing and its juice have time to settle.

Slice the squids.  Serve with soy sauce with a splash of lemon juice, which is how I like the sauce for ojingeo sundae.  It is also served with gochujang sauce mixed with vinegar, sugar, grated ginger and sesame seeds.

Don’t fill the squid with too much stuffing.  As the squid cooks, it will shrink whereas the stuffing will expand, which will lead to squid explosion (ok, I exaggerate.  It looks more like a torn shirt, which is still not pretty after going through all that effort).  Fill about 2/3 of the squid tube and shape it to make sure the stuffing is well spread out.  Also, leave some room at the end to get a toothpick through to seal the squid tube.