For reviews on how the food and the evening actually went, check these out:

Photos taken by Dan So 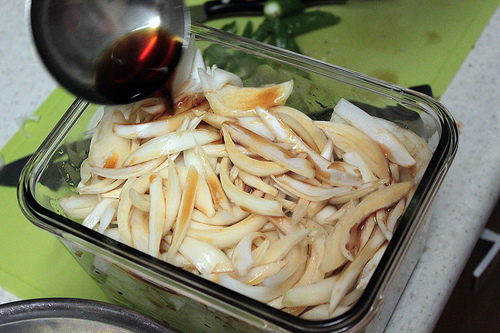 Time to start. The onions need to be pickled enough ahead of time. This pork belly dish I make has always gone perfectly with EJ’s soy pickled onions. So I got to work in prepping them. EJ just stepped in and took over the whole thing in two large batches.

We’ve been getting all set up for the pop-up restaurant–Seoul’s first one of its kind. It’s funny that no matter how much planning you do you still feel unprepared. We went to Garak Market to pick up most of our main ingredients. This place is super huge! I bet it’s bigger than Disneyland but less organized and navigation friendly. It took me an hour and a half just to orient myself. We spent a total of four hours at the market and came out with bags of groceries, including 4 kg of onions and 9 kg of pork belly.

There were still quite a few items we needed, so I went to the Yongsan E-Mart to get those. I bought every single sprig of cilantro they had in stock. We were originally planning to make candied ginseng to garnish the makkolli cheese tarts, but it was either too hard to find or too expensive. I stumbled upon some deodeok root on sale and suggested it to Sarah. We decided to try making candied ginger and deodeok to see which one worked. I carried five full bags of groceries out the door, across the plaza, and into a taxi.

We started cooking. Kyotofu was kind enough to lend us their kitchen after 4 p.m. We started off with the pork belly and quail eggs. Peeled a ton of ginger. The challenge with the pork belly was to butcher it so that it was manageable but also even so that we could easily portion it later. I had never worked with this much meat at one time. 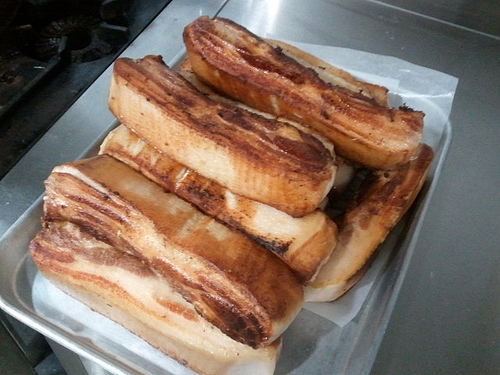 I browned the meat in a big stock pot and got my first grease burn on my arm. We then sweated the aromatics (onion, ginger, garlic) and added brown sugar to caramelize. I then returned the meat to the mixture and rolled it around.

Did I mention that it was a lot of meat?

I then added the liquids, leeks, and radish. Covered with foil, and we braised it for three hours. 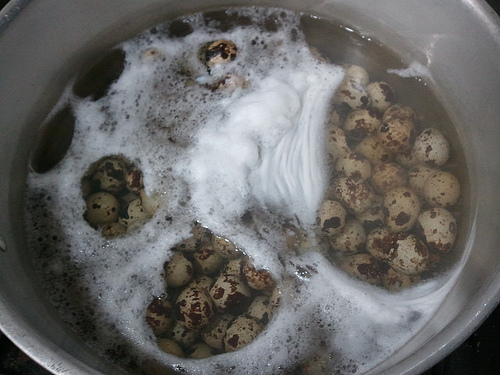 We then got to work on the quail eggs. We were doing a variation of jang jorim, soy briased quail eggs, but in the fashion of Chinese tea eggs, which have this beautiful marbled texture. I’d experiment with this, and it worked on chicken eggs. I was nervous that quail eggs would have some property that would make it not work. 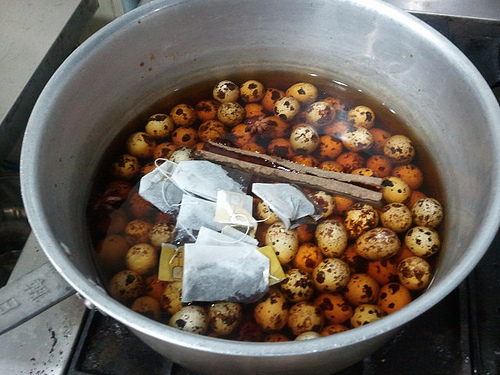 So we first boiled the eggs then make lots of tiny cracks with spoons. We returned the eggs to the pot with the braising liquid, which included soy sauce, brown sugar, star anise, cinnamon, and tea bags. Let that simmer for a few hours. 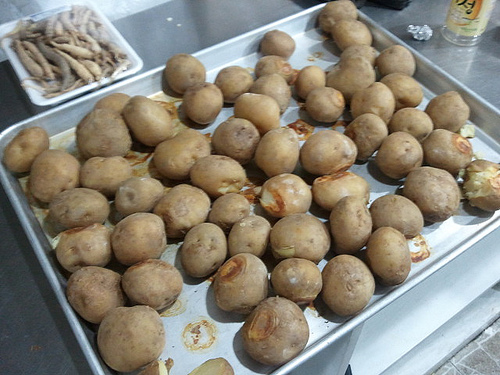 In the meantime, we had some potatoes baking. We peeled them, and I usually rice them by passing them through a metal mesh colander. But these were just not cooperating. Sarah proposed doing them in the blender. I was worried about messing with the texture, so we experimented. 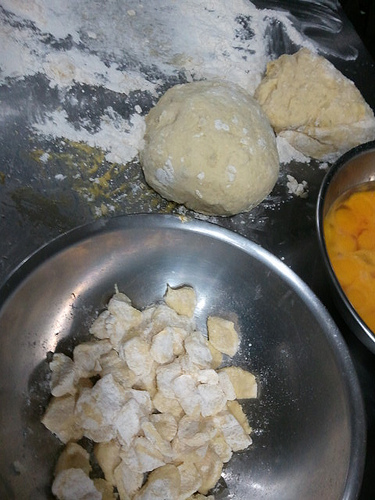 The goal was to make a hybrid of potato gnocchi and sujebi (Korean dumplings). I had tested this at home, and it worked. But when we made our first experiment, the texture was too mushy. We then changed the concept of the dish to make it more like sujebi than gnocchi, which meant using more flour and kneading the dough much more to bring out the glutens and increase its chewiness. We boiled a few, and we liked the results.

The pork belly had about finished, and we tried it. It was okay but could be better. In the past, I have oversalted this dish. This time it wasn’t salty enough. So we decided to work on it some more the next day. In the meantime, we had to transfer it to another container that would fit in the refrigerator. This was a challenge because the pork belly was so soft it would easily fall apart from its own weight. We needed it intact for serving.

The past few days have also seen some jockeying around with the reservation list. We’ve had a big waiting list, and we ended up with a few cancellations, so everything worked out. But it still involved some logistics to make sure everyone had the info she needed.

I arrived at the kitchen, and Sarah had already done much of the hard work–peeling the eggs and potatoes. She got started on peeling the deodeok. Next time I’ll suggest dishes that require a little less tedious prep.

We went through a few iterations to get the candied deodeok the way we wanted it. I put the pork back on the stove and reworked the flavorings. Got it perfect! I then started the soju sauce. That was pretty easy. I had done this one a lot of times. When that finished, I put on the shrimp with two bags of Zatarain’s Crab Boil–my last in stock. Doing so was like chemical warfare, and the kitchen was difficult to breathe in for a good bit. I quickly worked to get six kilos of shrimp boiled and iced.

We went down the prep list we meticulously planned. Towards the end of the evening, one thing was blaring at us–Cilantro Kimchi. This was the one dish that I had not experimented with ahead of time. So we worked together to come up with the right flavors. Sarah really did it. The secret, we found, was using a lot of maesil ek (plum extract). And we figured we’d have to make it right before serving or the cilantro would wilt.

In the meantime, I was dealing with this mountain of dough that had to be made into sujebi. I tried different methods to make the work faster. Yet I just had to put on my ajumma hat and think how the women who do this every day would make it. When we had enough room on the stove, I had two large pots boiling with salt, two metal bowls with ice baths, and two bowls for draining. Sarah had already portioned the dough into flat triangles. I floured up my hands, and using my thumb and middle finger, flung little dumplings off the triangle one by one into the water. I got up some speed after a while. It was a good few hours of doing this. But we did it! The clean up was pretty heavy after that. Looked like a bag of flour had exploded.

It rained all day Saturday. That got me filled with dread. There were a couple of last minute cancellations and additions. I arrived at the kitchen at two o’clock. We had to put together the blueberries on the tarts and carefully wrap them.

Sarah’s boyfriend Paul showed up with his car. We had everything out and accounted for. I double checked with the lists we made. We also made sure we had all the equipment we needed to use at the restaurant. My big fear was that the big pot of pork would get knocked over in transit. But it fit securely. Sarah and I each held a tray of tarts during the ride.

We arrived at the cafe early, but it helped us get our thoughts together. The time went by quickly. The volunteers started showing up. This was when Sarah was in her zone. She immediately and efficiently trained them, and they all set to work. My job was to get the kitchen prepped, which really didn’t require too much. I had to figure out how much time it took to heat up the pork in the convection oven we brought over. I also set up areas for plating. My cooking buddy June came to help us in the kitchen. With the three of us, the night went smoothly. 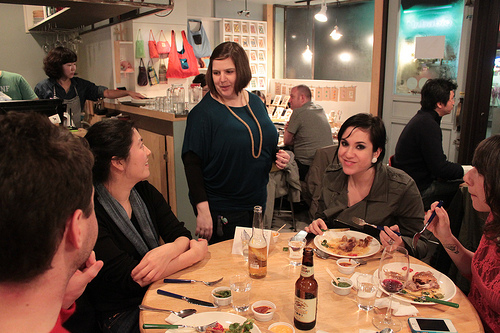 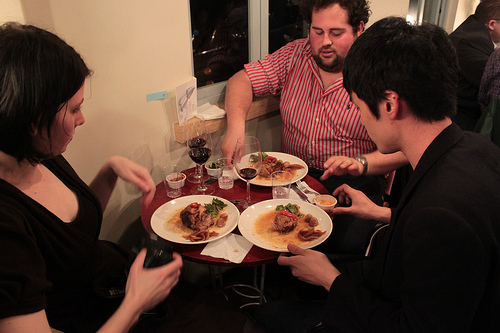 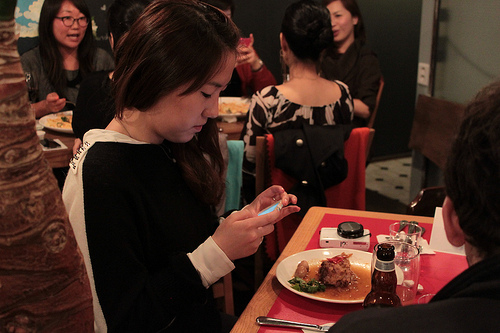 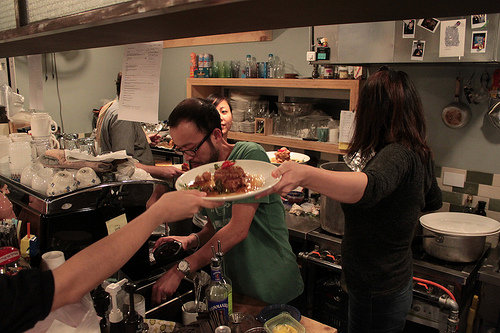 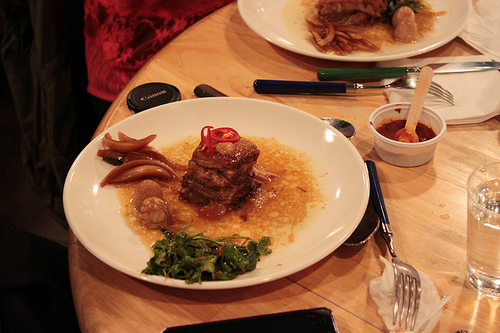 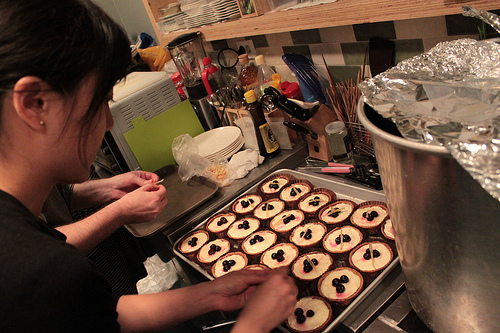 So, we actually did it. The pork and the cilantro were the only things we almost ran out of. We had just enough.

10 Magazine helped us by donating mugs and a gift certificate to High Street Market, which we gave out in a raffle for people who donated more than the suggested donation. 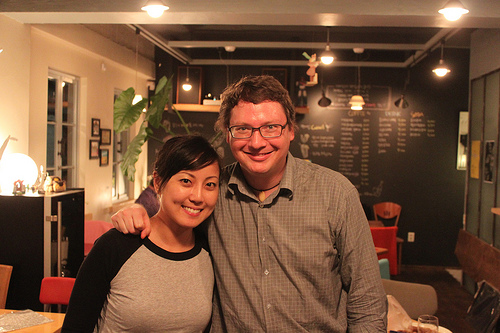 It looks like everyone enjoyed themselves. The guests had fun. The volunteers had fun. We had fun. The cafe owners and staff had fun. When it was all over, the volunteers finally had a chance to sit down and enjoy the food. I myself was looking forward to peeling some shrimp and sipping on a beer, which I did. It was my first beer after a service in over fifteen years.

I missed that taste.

If you want to find out when we will have our next events sign up for our weekly food events newsletter.