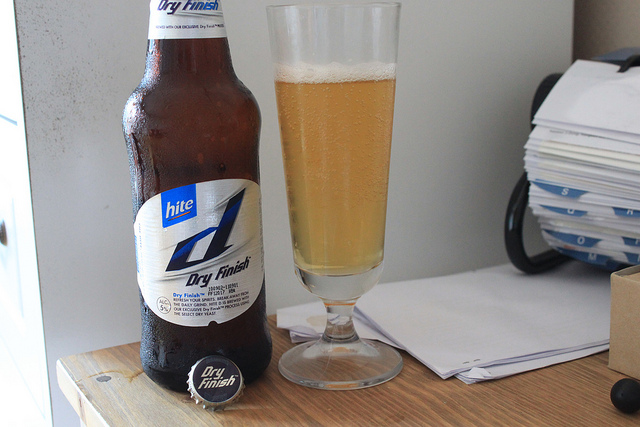 It’s been a while since one of the major Korean beer companies came out with a new product. A couple of years ago there was a flurry of new beers with Hite Max, Cass Red and OB Blue with the oddballs like S-Hite (with fiber to help you poo) and the Lysol-tasting Cass Lemon.

Hite d sounds like they’re trying to go in the right direction. As with most all Korean beers, it comes with the obligatory awkward English description.

REFRESH YOUR SPIRITS. BREAK AWAY FROM THE DAILY GRIND. HITE D IS BREWED WITH OUR EXCLUSIVE Dry Finish™ PROCESS USING THE SELECT DRY YEAST.

Ooh, the select dry yeast. Those must be some dynamic single-cell organisms. And it was almost in all caps, so you know they’re excited. Or angry. Or new to the internet.

Wine Korea’s Joshua Hall called me while I was taking my first sip. He was curious about this too, even though he’s been on a Sam Adam’s kick lately (now available at select E-Marts, he says).

“Trying to figure it out. Hmm… not much. No aroma. No hops.”

The first few sips were nice. But with no aroma and nothing but the strong finish, it actually got tiring. How does beer get tiring?

Again, they’re going in the right direction, but they’re not there. You know, if they just combined their Hite Max, which is the only Korean beer with hops, with this Hite d, we may be on to something there. But if I had to choose between Hite Max and Hite d, I’d still go for the Max.

And for the beer snobs and Korea haters, if I had to choose between Hite Max and most other import beers (except Bud and Coors), I’d choose them.