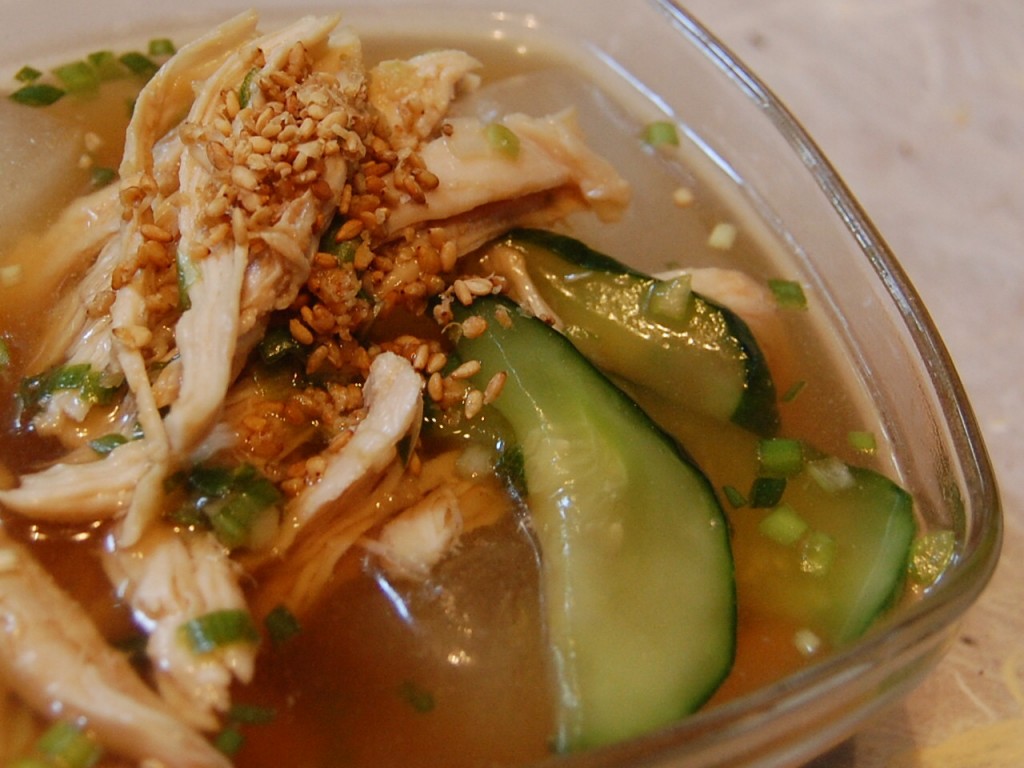 Today is chobok (초복), marking the first of boknal (복날), which are the three hottest days of the year by lunar calendar.  Although chicken is popular in Korea all year long, samgyetang (삼계탕; hot chicken soup with traditional medicinal herbs, including ginseng) is the most popular boknal dish.  My guess is that only a turkey on Thanksgiving would understand how a chicken on boknal feels.  You might understand the concept of yi yeol chi yeol (이열치열; to relieve heat with heat) and accept the Korean custom of eating hot food in the summer.  Even then, if you just can’t take a big bowl of hot chicken soup on a hot sticky day, here is an option for you.

Chogyetang (초계탕) is a chilled chicken soup originated from the northern regions of Korea (which falls in the territory of North Korea).  The name comes from the soup’s main seasoning of vinegar (식초; shik cho) and mustard (겨자; gyeo ja, but pronounced as gye ja with the regional accent).  While it is not as well known as other chicken dishes or summer dishes of Korea, the chilled, tangy broth with well seasoned chicken makes it a great dish that is sure to revive your appetite on a hot summer day.

For a light meal, buckwheat noodle (메밀면; me mil myeon) is often added to the broth, which can be a nice alternative to naengmyeon (냉면), arguably the most popular cold noodle dish in the summer.  For me, a smaller portion with just chicken and crunchy cucumber garnish without the noodles makes it a cooling summer appetizer.

I learned that a proper chogyetang made with some 25 herbs and vegetables was worthy to be part of the royal court cuisine.  Even for a simplified version, it would take a few more steps to make this dish if we didn’t already have chicken stock and shredded chicken meat chilled in the refrigerator as part of eating away a whole chicken.  Now, you can leisurely make it yourself at home with this simplified version of chogyetang.

Mix the seasoning with the meat.  Let rest for 15-20 minutes in the refrigerator.

Cut 1 short cucumber (I used one Kirby cucumber) into half-moon slices and mix with 1 Tbsp. of sea salt.  Let rest for 30 minutes or until the cucumber slices have wilted slightly.  Wash off salt in cold water, drain well, then refrigerate.

Place the chilled broth, seasoned meat, and salted cucumber garnish in 2 bowls.  Float a couple of chicken stock ice cubes and finish with a sprinkle of toasted sesame seeds.

Feel free to add buckwheat noodles (메밀면; me mil myeon), cooked as directed in the package, to the soup.  If you are making it as an appetizer, reduce the stock to 2-3 cups for two portions and adjust the recipe accordingly.

Next, we will finish this chicken series by cooking off the last bag of chicken meat in the freezer, which you should move to the refrigerator to defrost slowly.