The past two days have been extremely full, and we have barely left Anyang.

Thursday morning was a slow start.  I woke up and saw that Ben had been up since 4 a.m.

So I thought I should get on down to the hotel.  I tried to call Mom and Brian’s room, but there was no answer.  I assumed that they were already up and about.  I called Dad and Anita’s room, and they were up, so I went down to the hotel.  I met Dad and Anita and asked if they knew there the others had gone.  They didn’t know.  I went upstairs to check on them, and no one answered the door.  I was walking to the elevator when Ben opened.  It turned out that everyone took sleeping pills and had gone back to sleep.  It was then 10 a.m.  They forced themselves awake and got dressed.

Even though their room was cool looking, they found it too inconvenient.  Anytime Ben needed anything, he had to go upstairs.  He also didn’t like his bed, which really was a bench.  They asked if they could change to two separate rooms.  I said I would check.

I met Anita at the cafe downstairs, and we shared a coffee.  Dad showed up and then Ben.  I went to the front desk to check on changing rooms.  It was no problem.  They put both of them next to Dad and Anita, so now everyone’s on the same floor.  On the Death Star level.

Everyone eventually sauntered downstairs.  I thought it would be good to first get everyone oriented to the immediate area and show them the central market.  I found right away that getting everyone motivated and moving was going to be challenging.  But we got moving.

We walked through downtown Anyang.  I realized that many of the eateries there are closed during the day, so lunch would be a challenge.  We went underground to cross the street to the central market.  There was a food court down there, the most depressing food court in Korea.  The lights were dim, and there was barely anyone in there. 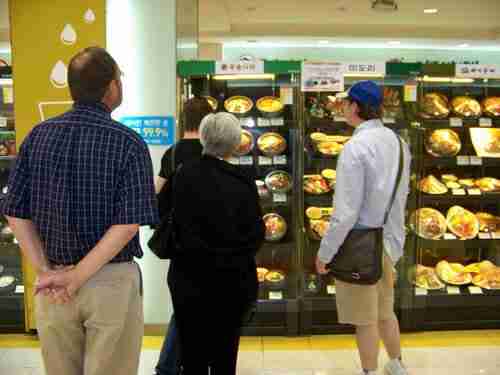 Nope, not that place.

We resurfaced at the market and wandered.  Everyone was taking pictures with abandon.  They were also all asking me questions simultaneously. 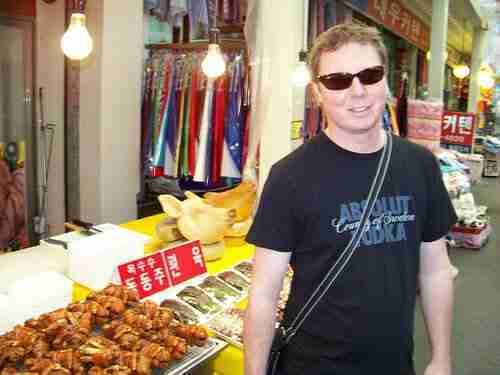 Everyone was having a good time.  I was just getting frazzled by making sure we didn’t lose anyone.  The vendors were craning their necks at this group of foreigners in their market.

Mom and Brian have this cute thing they do when they travel to make their pictures more interesting.  When they went to London, they had this paper cartoon boy that they held up when they took pictures of famous monuments.  On this trip, they are holding up a picture of my nieces pointing at something off camera.  It helps the folks at home to make the connection, and it’s funny. 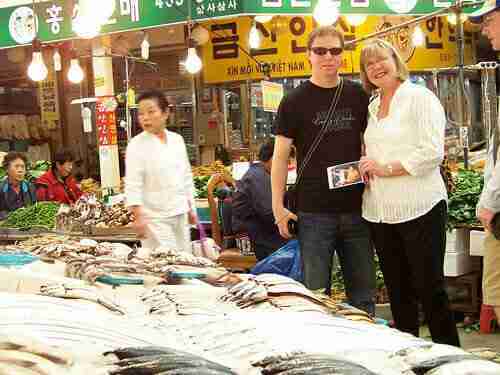 The highlights were the variety of live and previously live fish, the giant figs, mushrooms (the culinary kind), the chile powder and sesame oil makers, the noodle shop, and the Korean-style furniture. 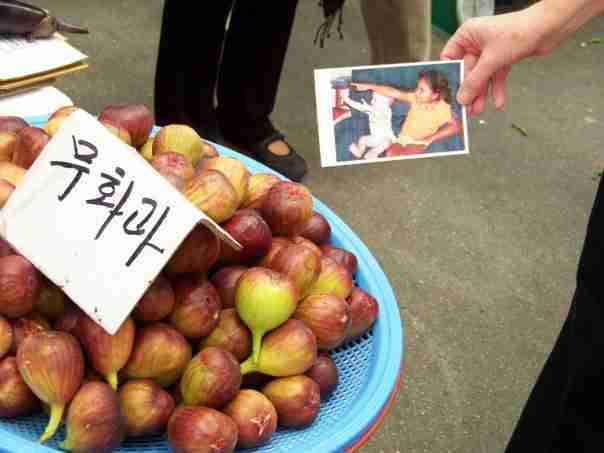 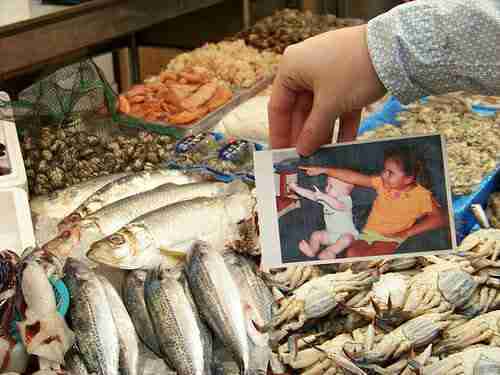 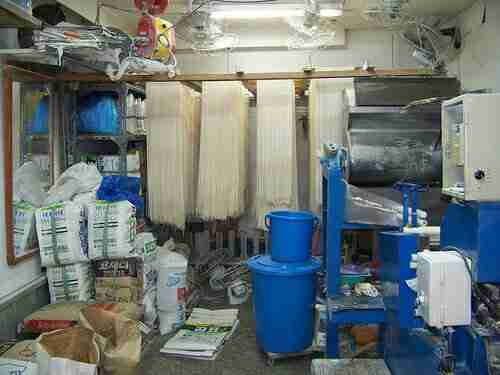 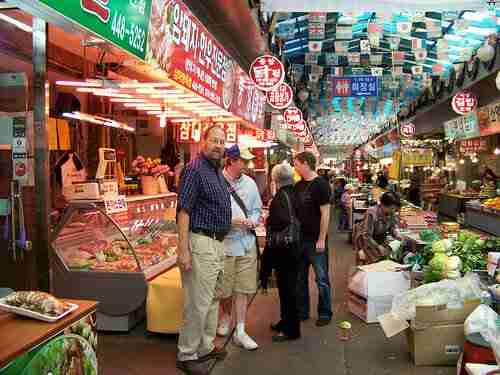 Ben stopped at the kimchi case to take pictures.  The lady came out to help and give samples.  Ben liked the fresh kimchi and gawked at the marinated raw crabs. 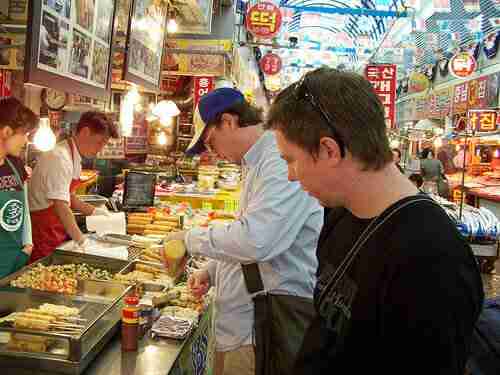 I stopped at a “hot bar” place to get my favorite street food.  It was the worst I ever had.  For one thing, they didn’t bother to heat it up.  So it was actually a “cold bar.”

My family was on vacation, and they were treating it like vacation.  I was getting requests to find locations to grab road beers.  We went to a convenience store at the edge of the market to get some. 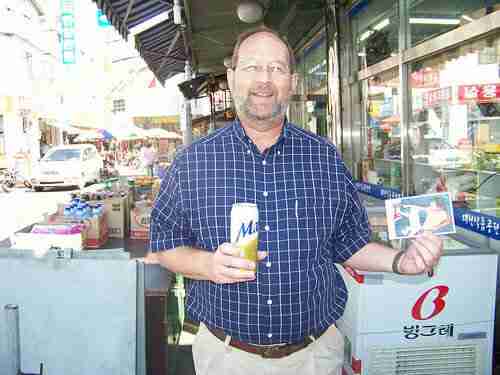 And all was good.

People were hungry.  I couldn’t find a good place to get lunch.  We picked up some street fried chicken, and they liked it.  Brian had spotted some Ddeok Galbi while we were walking in that looked like hamburger patties.  He wanted one of those.  We went back there to get one.  While we were waiting, a drunk crazy old man started bothering us and was tapping Brian, going, “Hello!  Hello!”

Brian looked like he was about to hit him.  He left before he could cause more trouble.

His shoes were starting to hurt, so we headed back to the hotel.  Mom and Brian had eaten enough street food to not need lunch.  The rest of us headed back out to find something.  We totally took the wrong route because I didn’t find anything to eat until we were back downtown.  A little noodle shop with 3,000 won noodles. 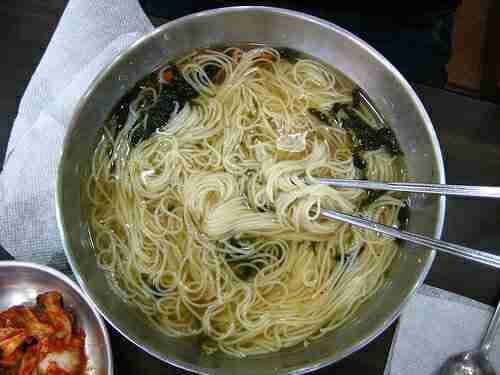 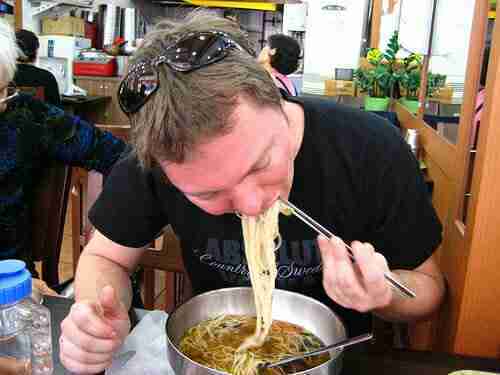 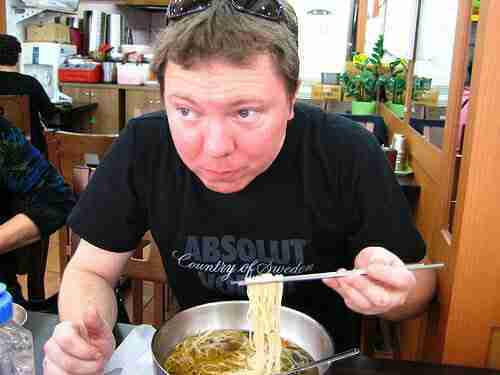 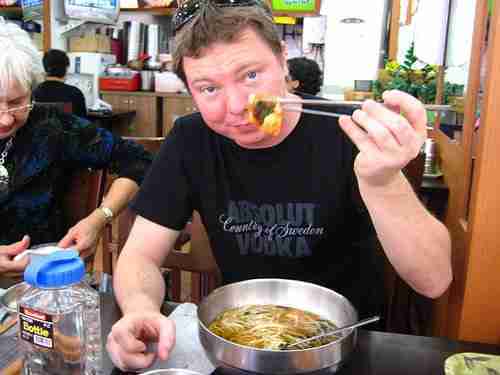 Dad, Anita and Ben each got Janchi Guksu, which is a basic noodle soup in dashi broth.  I got a bibim guksu, which is chilled noodles with spicy vinegar sauce.  They loved their noodles but thought that mine was the best.

While we were getting lunch, Mom and Brian went to the cafe to get a bottle of wine to take to the room.  They found one and asked if they could take it up.

So they went upstairs and waited for the wine to come up, along with the room service charge.  It was easier to swallow because of the amiable guy who was doing everything he could to be helpful. 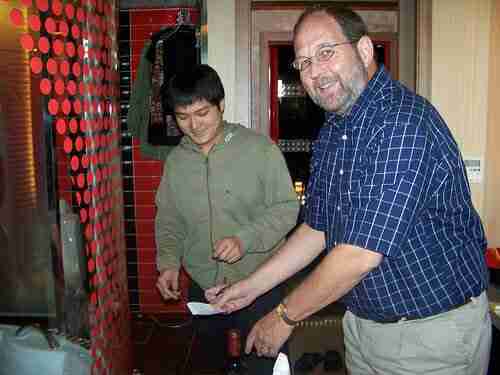 Eun Jeong, meanwhile, was in Apgujeong picking up our hanbok.  She called on her way back to check in on us.  She was exhausted and hungry.  I told her to go ahead and eat something light and take a nap.  We planned to meet at San Ma-eul Folk Village that evening, my favorite restaurant.

On the way back, we found that we really had taken the wrong route because we found lots of restaurants.  We also passed a school, which was flanked by junk food stands.  Ben took a picture of the infamous Pokemon-shaped pork cutlet on a stick.  I saw a mandu truck and bought some kimchi and meat dumplings to take back to the hotel.  We also got some beers and snacks at a syupa.

Ben and I hung out in his room.  He gave me the gifts he brought, which included some expensive Maldon sea salt, a microplane, a Silpat mat and a crank handle pepper grinder (something I’ve been trying to find for five years).  One of my big jobs for everyone was to anglicize their computers, which was a bit of a task but doable.

Mom showed up, and she munched on some mandu in the room and hung out with us.  She then took the mandu to Brian, who loved them.  I think they’re going to live off that stuff the rest of the trip.

We gathered back downstairs.  By then I got to meet the English speaking owner of the hotel, a middle aged lady who looked eerily like the owner of the School-Which-Must-Not-Be-Named.  She helped us hail taxis to take us to San Ma-eul.  We got there way before EJ, who had a hard time finding a cab.  We used the opportunity to play around on the grounds in front, which is a menagerie of birds, rabbits and a monkey.

The sun had already gone down, which disappointed me.  It’s really romantic to watch the sunset there.  We still ate outside.  In hindsight, even though everyone was well dressed for the weather, may not have been the best idea.  The food got cold really quickly.  I also made the mistake of ordering for everyone as I would order myself, which meant that everyone got a big ass bowl of barley rice and stacks of plates of vegetables to put in there.  We got some dong dong ju (rice beer), beer and soju.  Brian liked the dong dong ju and soju.  The big hits were the barbecued chicken (Ben: “Please find out what kind of wood they use”) and the pajeon (crispy onion and squid pancake).  The onions in the pajeon were plump and fresh.  I bet you they were grown in the fields next to the restaurant.  The mistake in ordering so many boribaps (barley rice) was that Brian doesn’t like veggies and Mom’s mouth has been sensitive lately to spicy foods, which meant that both of them were stuck with big bowls of plain rice with no vegetables or red pepper paste.  I guess it wasn’t their favorite meal.  But they did like the chicken.  Ben loved the whole thing.  And everyone loved the atmosphere.

The next destination was our apartment by way of E-Mart.  At E-Mart we stocked on wine so the fam didn’t have to buy anymore overpriced “room service” wine.  I just had to get them to experience my daily grocery experience.  Long timers forget what a surreal experience it is.  Ben got some fermented fish roe and marinated baby crabs.

We settled in the apartment, despite our lack of comfortable seating.  Beers were poured.  I saw that our sisters were on Skype, so we all gathered and talked to them on the video phone.  EJ and I opened our gifts on video, and it was a great experience.  I actually started crying when I read the note from my grandmother.

The parentiles were visibly sleepy, so we got them a taxi home.  Ben wanted to stay behind and watch Top Chef.  We were talking so much that I don’t remember much of what happened on the show.  I then walked him out and got him a quick taxi back.  He mentioned on Facebook later that he saw what he thinks was a prostitute in the lobby, gathering from her youth and skimpy clothes and her fawning on a man twice her age.

It’s time to go pick up everyone to start our first full day in Seoul.  I’ll fill you in on day 3 later.  It was another good one.