Finally the day has come for the family to arrive.  I’ve been waiting for this moment for over five years.  I can’t believe it has happened!

EJ and I have been scrambling to think of what all little things need to be cleaned up (smudge on the corner of patio wall), I’m sure neglecting to notice the big things (clothes on chairs).  EJ has been extremely nervous.  But I think she’s much better now.

We got extremely sidetracked and left for the airport thirty minutes later than planned.  We took the airport limo bus.  We got there precisely at the time the first plane of family was scheduled to arrive.  Yet it arrived 45 minutes early.  Still, it took them almost an hour to get out and get processed.  I stood at the doorway, peeking in every time the automatic doors opened, looking for a tall man with a beard.  EJ was on the phone most of the time working on arrangements.  I had, in classic Joe fashion, screwed up Dad’s flight number.  I wrote down his flight number for San Francisco, not Seoul.  And we were trying to coordinate the taxi with Dad’s flight.  We didn’t know which one he would be on.

Brian, Mom and Ben came out, and we hugged.  EJ and I had been so busy that we had forgotten to eat lunch, so we were hungry.  There was still an hour before Dad and Anita would arrive, so we were thinking of going to a cafe.  But the recent arrivals unanimously requested a good stiff drink.

EJ, being a former tour guide and knowing the airport well, guided us to a restaurant on the 3rd floor.  Mom needed a glass of wine.  The manager said they didn’t serve wine by the glass, but they did sell bottles.  The cheapest bottle I saw was 20,000 won for a shiraz.  BUT… he said those were only sold as gift sets.  The shiraz bumped up to 40,000 won.  Ben pointed out that there were more restaurants down the hallway, including a Bennigan’s.

We decided we’d have better luck at Bennigan’s.  I should note that when I first came to Korean in 2004, my friends took me straight to Bennigan’s in Anyang for my first meal in Korea.  The Bennigan’s at the airport reconfirmed my controversial stance that the worst service in Korea is at western chain restaurants.  There was no ding dong bell.  And we couldn’t really yell for a server because they kept wandering off to God-knows-where.  We did get some beers for the men, a glass of red for Mom and a kiwi juice for EJ.  EJ and I also ordered a bowl of spaghetti and meatballs, since I never get meatballs in Korea.  When the food came out, Chef Ben immediately analyzed it and scoffed at its sub-par standards.  “The green peppers are raw.  The smell is disgusting.”

EJ, in the bus, was baffled as to why I had brought the family gifts with us.  I intended to give them out during the taxi ride to the hotel.  But when we were at Bennigan’s, EJ couldn’t wait to hand them out.  Couldn’t even wait for the rest of the family to show up.  So we gave Mom a scarf handmade in India.  For the men, I gave Cuban cigars (thanks SeoulPodcast John).  They were impressed by all of the gifts, so that was a relief.

I had barely touched my spaghetti when EJ suggested we go down to the arrival level and find Dad.  When we got down there, I noticed some internet kiosks for 500 won/10 minutes.  We didn’t have any 500 won coins, so we changed some money at a cashier.  I logged onto my email account and tracked down Dad’s itinerary (gotta love Gmail).  We found his flight number.  It had landed precisely one minute ago.  We estimated we had at least thirty minutes, so we went back up to finish our spaghetti and get another round of drinks.  The others were already nibbling on it while we were gone.  Ben had to evaluate the meatballs, ya know.  The second round had to take complaining to an extra server before they showed.  By then, we had to chug our drinks in order to make it down there on time.

Yet we made it.

We didn’t have to wait long for Dad and Anita.  And when they showed, EJ coordinated with the taxi, and we exited almost immediately.  The taxi itself was a van that looked like a discotheque inside.  Running lights in the interior, as if designed by Tron.  I gave Anita and Dad the other scarf and cigar.

It took around an hour to get to the hotel.  The ride wasn’t as scenic as I’d hoped.  The driver took a few shortcuts through the ghettos.  We got to the hotel, and it was just as gaudy as I remembered it.  Even better.  The lounge that was under construction two months ago was finished in all its Austin Powers/Rip Taylor glory.  By the time we arrived, Ben, Mom and Brian had decided to forego dinner.  The jet lag smacked them in the face.  Ben’s face actually was beet red.

The staff was in awe.  They were expecting us, but I think the family must have been the first significant group of westerners ever to go there.  I was a bit nervous about it.  It’s a love motel that was remodeled this summer to try to attract the tourism business in the most over-the-top fashion possible.  Check-in was a little bit of a hassle because poor EJ was trying to figure out how to translate their questions on how they wanted to pay, while Brian was visibly zoning out, thinking, “I don’t really give a f%$@.  Get me to a bed!”

They first led Dad and Anita to their room.  Everyone came with big suitcases, and the elevator was tiny.  Next were Brian, Mom and Ben.  EJ, the desk guy and I followed.  We brought the rest of the bags to Brian, Mom and Ben’s room.  So far they looked impressed.  Ben wasn’t impressed with his bed, which was a converted bench with no mattress.  Kinda Japanese style.  The desk guy came up with extra thick comforters to make it softer for him, which I hope worked.  The other issue was getting our hands on a transformer so Mom could plug in her necessities.  They said they had one, but it took a while to find it.  Luckily they found it, which meant that EJ and I didn’t have to rush home and retrieve one of ours.  We went upstairs to check out the “master bedroom.” Note, this particular hotel room is two stories.  Two giant flat screen HDTVs with surround sound.  “Cocktail bar” with two computers and free internet.  Everything looked supplied except for a closet (DOH!).  But I think they have improvised a workaround by hanging their clothes on the towel racks.  They also were disoriented by the idea that they needed to take their shoes off in the doorway.  I’ve been living here so long that I subconsciously cringe when I see shoes worn inside.

The bed.  OMG… the bed!  Now, when I was a kid, I was always thrilled when we got a hotel room with a vibrating bed.  The ones in this hotel are a major upgrade.  You don’t have to pay anything.  They have a remote control with “anma” (like massage from a blind person) and “wave” settings.  We turned it on, and it looked like an alien was going to pop out of the bed’s stomach.  Scary.

We made sure they had enough towels and everything.  The desk guy was a bit young and spoke a modicum of English and was so excited.  We left them to sleep and went downstairs to get Dad and Anita.  The jet lag hadn’t hit them fully yet.  We saw their room, after walking down a hallway that was precisely modeled after the Death Star.  Where Mom and Brian had a double jacuzzi, Dad and Anita had a circular glass enclosed jacuzzi that looked inspired by the teleporter pads on the Enterprise.  They showed us around the room.  I was curious if they also had a naughty massage bed.  They did.  And they both laid down on the bed while we showed them how it worked.  It was hilarious.

We headed outside.  The air had gotten chillier.  I’m used to walking around, so I decided we could walk to Anyang 1st Street (one of two downtown areas) for some dinner.

It was a bit of a walk, and EJ had not dressed well for the colder evening.  We did get down there after passing through the grungy neighborhood surrounding the hotel.  When we got there, Anita stopped in awe.

“Hold on.  I need to get pictures of this place.”

I took her camera and got their pictures on the street, surrounded by neon and blaring K-pop.  They were greatly energized by the buzzing life on the streets around them.  The restaurant we wanted to go to was on the other end of the downtown area.  It’s a barbecue bossam place that we discovered a couple of months ago.  At that time, EJ was on a strict diet because of her Chinese medicine, so we had to eat fish stew while being surrounded by people eating smoked pork and duck.

We got there, and the owners and diners looked thrilled to have westerners–and not just rowdy English teachers–sit down at their restaurant.  They gave us aprons, which we donned.  We ordered two orders of smoked pork belly and two orders of smoked duck.  Dad and Anita struggled about with their chopsticks, but they were stubbornly determined to use them.  The pork arrived, and they placed it over the charcoals.  This place was unique in that they used a special pan that was shaped like a curved wedge.  The meat sat on top, and the fat pooled in two gutters at the bottom.  The gutters they filled with kimchi soup, which happily boiled away.  We had a bowl of more soup at the table to replenish it. 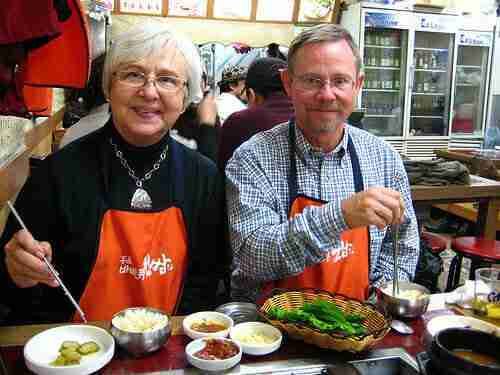 When the pork had a good sear on it, EJ showed them how she makes her lettuce wraps.  They followed suit.  They liked it.  In fact, Dad just started eating the kimchi straight.  He was hooked on it.  We ordered some beers, and EJ wanted some magkeolli (rice beer).  They were good sports and tried the magkeolli–and liked it.  They really liked the duck and were relieved to find that they didn’t have to wrap everything in lettuce. 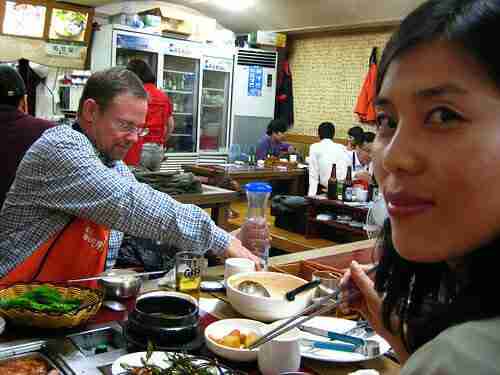 That was an amazing meal, even by our standards.  I think we’ve found a new favorite spot.

The jetlag finally caught up with them.  We went to Paris Baguette to grab some morning pastries.  Then we shared a taxi and dropped them off at the hotel.  Poor EJ was exhausted.  But happy.  She went on and on about how cute Dad was.

I just noticed on Facebook that Ben and gang woke up at 4 a.m.  So I guess I should get in touch with them and meet.  We still have a lot to do that we have not had time for, like getting me some contact lenses for the wedding.  I don’t want to dress in traditional clothes and wear glasses.  Don’t you hate it when you got to places where people dress in historical clothing but wear modern eyewear?

We also have some issues with our new internet phone, and the repairman will stop by this morning.  After that, EJ has to go to Apgujeong to pick up our hanbok.  I think today will be a whirlwind tour of Anyang with a meal at the mountain restaurant (San Ma-eul Boribap), which I love so much.