So Eun Jeong went to the wedding. I couldn’t go because I had work to do. Yet she did take the camera.

Eun Jeong’s presence at this wedding was required because she was the designated catcher of the bride’s bouquet.

In Korea’s rush to modernization, it has mimicked a lot of Western institutions but has tended to miss the point in its execution. As a result, Korean modern weddings look more like cheap Vegas weddings with all the dignity removed and replaced by bubbles and smoke machines.

First, the bride is holed up in a room, where guests can have their pictures taken with her. This reminds me of being a kid getting a picture with Santa or the Easter Bunny at the mall. Before, during, or after this event, you give the bride or groom your wedding gift–cold hard cash in an envelope. Your closeness to the happy couple determines how much money you give.

The wedding itself takes place in a professional wedding hall, which are all over Korea, usually done up like plastic palaces. Guests talk all during the ceremony, which to Western sentimentalities is rude. Yet in traditional Korean weddings, this is normal–and I think this works for traditional Korean weddings, which are interactive social affairs. It just seems out of place in Western style weddings to have guests talk when their attentions should be on the bride and groom out of respect.

But there’s little respect or dignity in a modern wedding in Korea. The whole affair is laced in fog and bubble machines. I would not be surprised to see strobe lights and disco balls introduced. In fact, I think I remember seeing a disco ball once being used.

The ceremony itself is short and sweet–in theory. The photographer takes over the show. Everything is for the sake of pictures. Each little part is frozen and posed for. 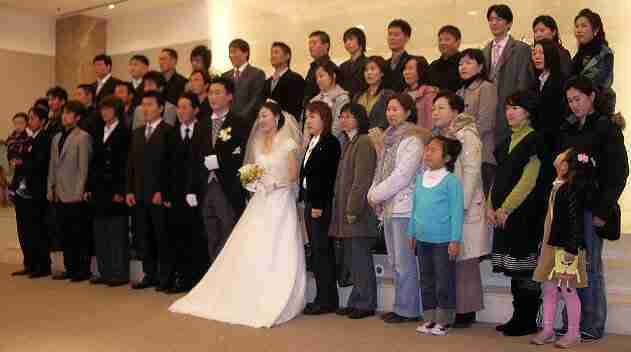 Then there are the family group photos followed by the groom’s and bride’s friends photo. 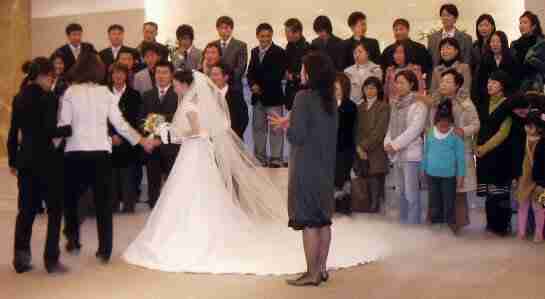 Fire up the smoke machines! It’s time for the Catching of the Bouquet Shot. Eun Jeong takes her place, hands outstretched for that damn bouquet. The photog’s assistants make sure every joint is in the right pose. 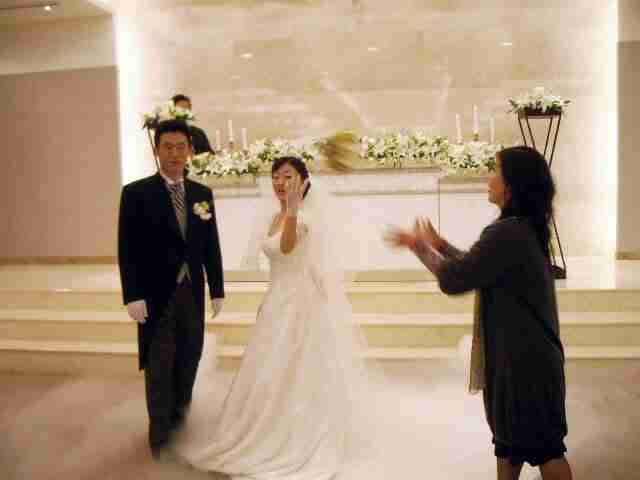 Clear away the people, throw the bouquet, and GOT IT!

After the wedding is more photo opportunities. This time the bride wears a traditional hanbok. Now, this is what I think Korean weddings should be like.

If you excuse the urinal in the background, the traditional look and style I think is best. Thank goodness Eun Jeong has agreed there will be no smoke machine at our wedding.