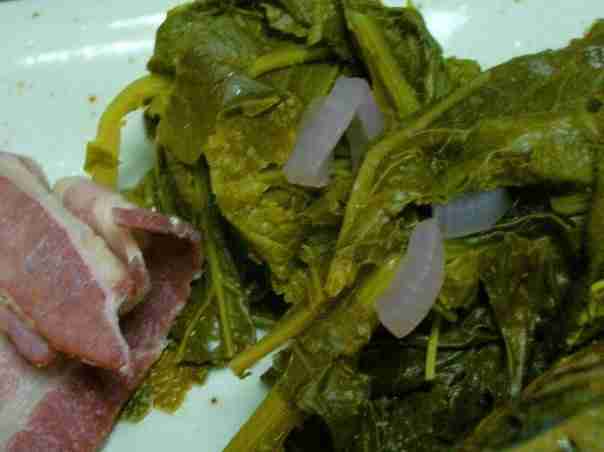 There ain’t no collard greens in Korea, but it don’t mean a Southerner can’t get his fix.

Southern cuisine, you know, the original melting pot cuisine that blended Cajun French, West African, colonial Spanish, British, and Irish cuisines with a touch of Texas–is finally getting the recognition it deserves from the culinary elite.

I miss the vegetables from the South. I miss the cooking of my grandmothers (even though I hated it as a kid).

I especially love collards. Have I mentioned that yet?

My mother hates them. I only had them when I didn’t eat at home, from pre-school lunches with pinto beans and cornbread (sigh) through high school and learning to really enjoy winter collards on my ex-in-laws’ farm (Frances Avery is also an amazing cook).

No fear Southerners and soul food enthusiasts–the techniques for making Southern greens apply to most greens all around the world. And Korea has them in ample supply. This is a country where, it would seem, they throw away the prime food and cook with the leftovers nobody wants–and make it good, including the leafy greens from vegetable plants.

I picked up some daikon radish greens at E-Mart the other day. Here’s what I did.

Even at the big boxes like E-Mart, there isn’t much processing from the farm to the store. So you have to thoroughly wash each leaf individually. I have learned that the hard way.

In my largest pot, I placed the greens with enough water to cover them. I added some sliced onions, a couple cloves of garlic, half a cup of rice vinegar, a handful of salt, and around eight slices of bacon.

That’s what makes it–smoked pork of some kind. The bacon I used came from Costco. I’m not sure if the bacon they sell in Korean stores is still good enough for this application. It’s too thin, limp, and bland. Yet I’m sure one day soon good bacon will start appearing on the shelves. I haven’t tried this yet, but I think tossing in the bones and meat from some jok bal ì¡±ë°œ (cured pigs feet) could create something good and interesting. I may try that next time.

Bring the pot to a boil and simmer, covered, for an hour. The greens will be tender and bursting with flavor. I like them best with a roast chicken and mashed potatoes. 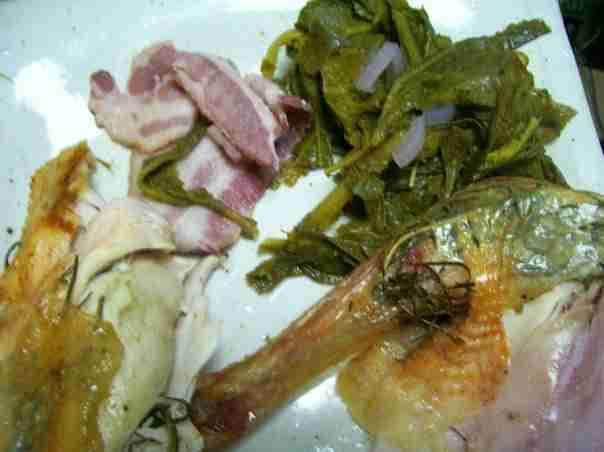