We had two Korean bloggers on this trip who complained the whole time. They were a little stuck on themselves and demanded that every part be the height of luxury. Rather than bring everyone down, I suggested to the guides to let them go home. So we dropped them off at the tourism office, where they took them back on the ferry.

When we got back in the van, we high fived. One of the men said, “The bad guys are gone.”

Immediately the mood improved. Our first stop was a cave that is just starting to be developed for tourism, Ka-Amon Cave in Barangay Bonliw, Torrijos, Marinduque. Most caves you go to as a tourist have manicured steps and railings with colorful flood lights and signs. Not here. This is a real spelunking adventure. 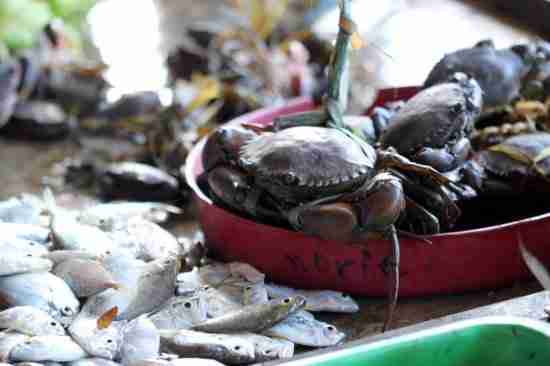 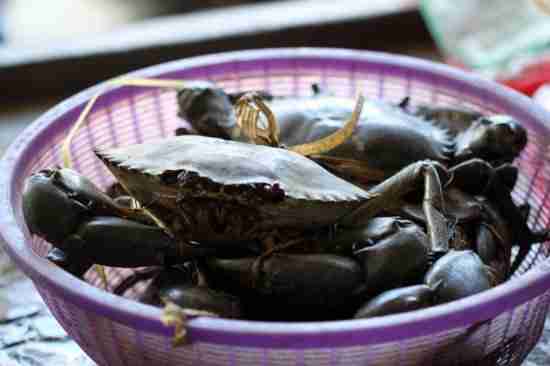 We made a detour to Santa Cruz to grab some crabs and shrimp at the fish market. Then we drove off to the cave.

We ate the burgers from Goodchow that we had packed. I was impressed that they were pretty darn good. Joanne said they took a long time to make because the cook sliced each vegetable and cheese per order. The meat itself had a hefty crust. 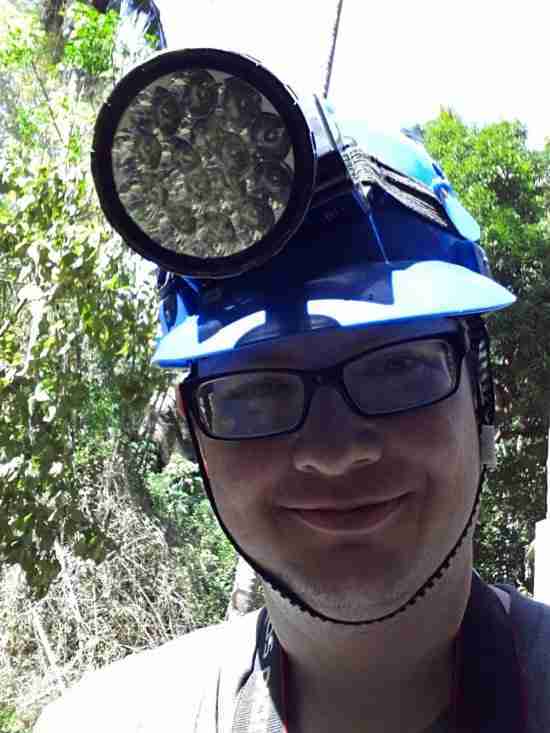 We donned our helmets with lights and trekked up the mountain. It was a short climb. We went into the cave. Since it was used for burial a long time ago, there were still some human bones in there. Going further required some good balance and a good bit of squeezing. We reached a point of no return because we would disturb a chamber full of bats. Every now and then one would fly out and scare everyone. It startled me, too. I knew they wouldn’t hurt me, but anything flying straight at your face is going to make you flinch. One brushed up against my hand. I found the bats to be the coolest part. 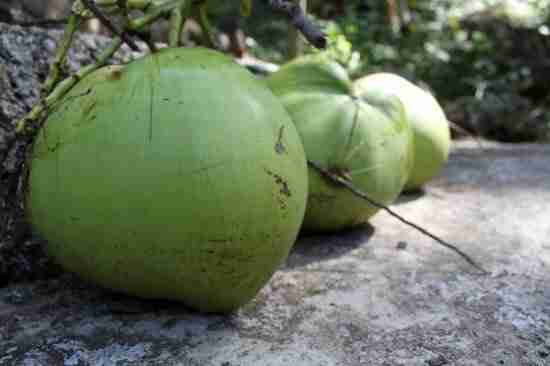 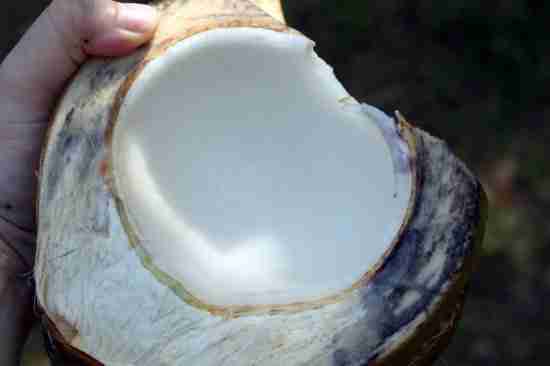 When we emerged, some folks were waiting for us with some buko. I had asked Dindo before what buko was. I had seen signs advertising buko shakes and buko pies. He said it was young coconut. So while we were spelunking, he got some people to get us some buko. A machete was drawn, and a hole was carved. We each had our own coconut to drink. Then he sliced it in half and fashioned a spoon out of one of the pieces. The meat was soft and gelatinous. Mild and sweet. My new addiction! 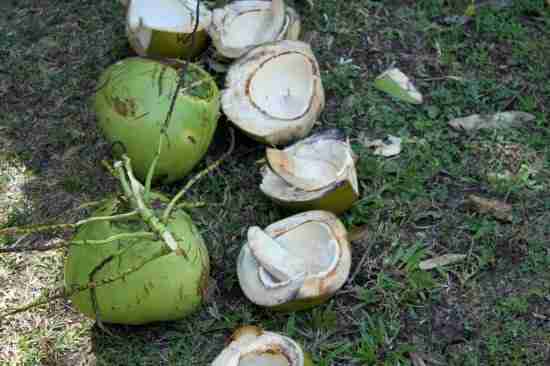 I think we all started to relax and enjoy ourselves at this point.

Dindo was worried. We were on our way to Poctoy White Beach (Puting-Buhangin Beach in Tagalog). He said he got news that the beach was crowded. In Korea, when you say that, it means that you have only inches between yourself and other people. But in the Philippines, people are used to having entire beaches to themselves. The crowd at this beach was no bigger than an average beach in Florida. It was the holidays.

We luckily had a hut all to ourselves, I met the diving instructors, including the most hilarious character, a middle-aged mustachioed man named Freedom. He laughed at my jokes, which instantly makes anyone a friend of mine. 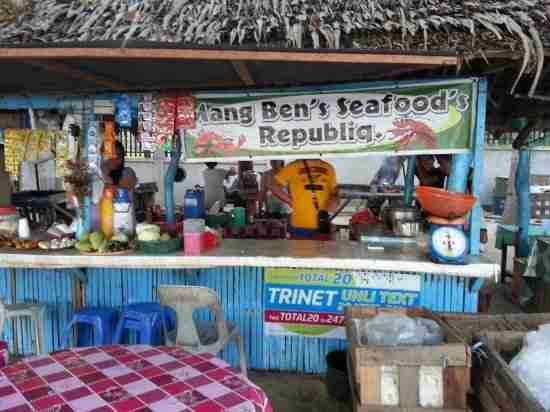 They took the seafood to an open kitchen at the rear of the beach, and I filmed them cooking our catch. Click here to see the video. The scent of charcoal and shallots filled the air. Dindo kept supplying me with bottles of San Miguel. We definitely were starting to enjoy ourselves. 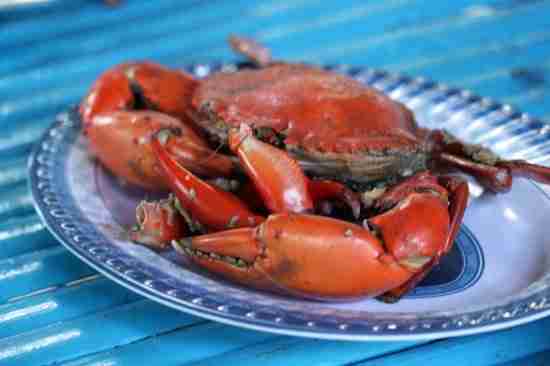 The group devoured the shrimp. And the crab—so surprised at how simple the preparation was because it was full of flavor. 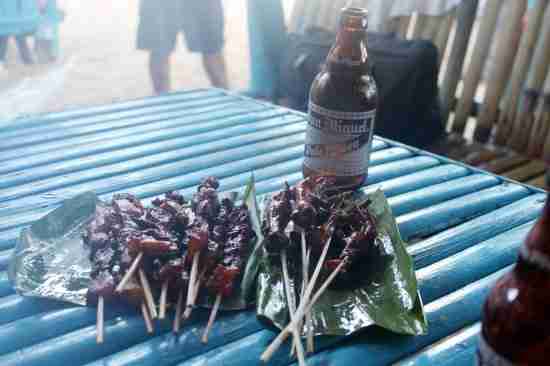 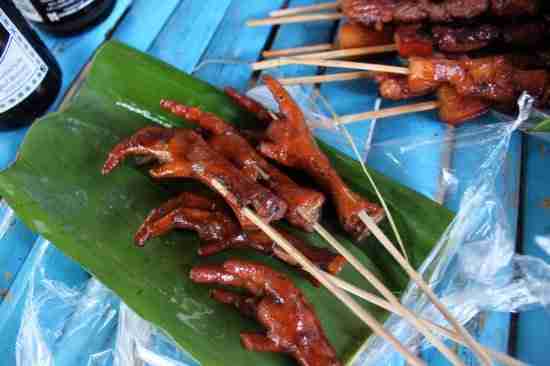 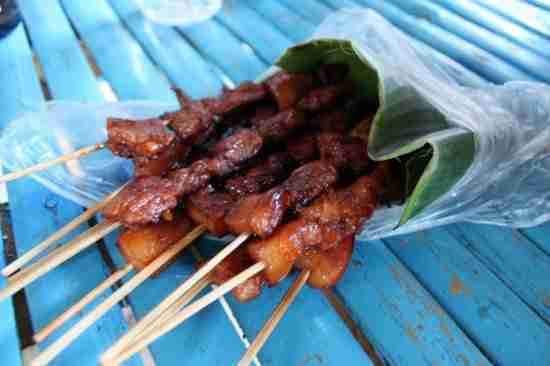 We also had skewers of barbecued pork belly and chicken feet.

The sun set, and the bands started playing. Everyone was having a good time, and they were all cool and friendly. One guy was getting a henna tattoo on his back. We had eaten so well that we decided to skip dinner. We had one more order of business. It was tour guide Harry’s birthday, so we made sure that the MCs on stage did something special for him. They got him to go onstage, and everyone cheered for him.

It was still early in the evening—around eight or nine. But we all fell asleep in the van on the way back.