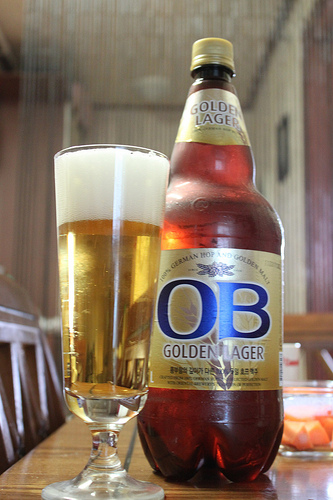 A few years ago, we witnessed some innovations in the big brand Korean breweries with the introductions of Cass Red, OB Blue, Hite S and Hite Max. Max ended up being the winner of them all, going from a hard-to-find bottle to a common draft in bars and restaurants. Hite D Dry Finish, which was released last year, hasn’t repeated Max’s success yet. I’d like to say that Max’s gains in this stubborn field is credited to marketing and the fact that it actually has some hops in it.

So I was happy to see a second beer pop up in Korea with hops in it, OB Golden Lager. On the bottle it claims to have “100% German hop and golden malt.”

I took it home and tried it. I concentrated on it. I slowly pondered it.

If anything, it tasted more like Hite D. It didn’t have the corn flavor of Cass (which some like), but it was void of most any distinct flavor. When I lived in Germany, I remembered the beers were light but had long lasting heads. This one was photographed right after pouring, and I had to rush it because the head disappeared about as fast as a Coke.

Maybe there’s some advantage from the malt in there, but the hops? Don’t let the “100% German hop” label give you the hopeful impression. Yeah, the hops they used may have been 100% German, but I think they just waved the hops near the beer. One hundred percent German hops but zero percent aroma.

I was not only disappointed, I was miffed–a bit angry. I felt truly suckered by that claim on the label. I hope to never see OB Golden Lager near me again.

For another review of OB Golden Lager, go to Homebrew Korea.