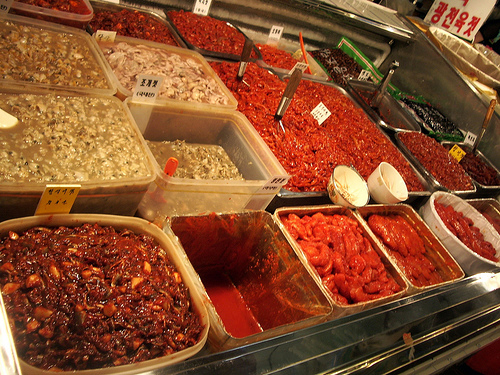 Jeotgal at Noryangjin Market in Seoul

EDITOR’S NOTE: This is a guest post from Kpopaddict. She’s brave enough to tackle a subject that a lot of us love but don’t have the chops for.

What Exactly is Jeotgal?

Jeotgal is a popular Korean dish mainly used as a condiment or seasoning. It consists of various type of seafood, such as shrimp, shellfish, oysters, squid, whole fish, fish eggs, and the intestines of fish. The seafood is salted and fermented, and often replaces soy sauce or salt in certain dishes.

One might think that jeotgal is destined only for uniquely crafted Korean dishes, or as a condiment for Asian foods like rice with kimchi. Jeotgal is incredibly versatile, however, and lends itself far outside of Asian cuisine. Experimentation is a key ground for using it successfully, but infusing a clam chowder with jeotgal is just one example of possible fusion cuisine.

As jeotgal goes through a fermentation process, the finished product contains probiotics. Probiotics are beneficial microorganisms found within a variety of foods; however, current market trends popularize adding probiotics to other foods. Probiotics regulate intestinal movements, lower cholesterol, boost the immune system, and a variety of other benefits. The salting and fermentation process of jeotgal encourages the growth of probiotics, making jeotgal an excellent food for the health-conscious.

How To Make Jeotgal