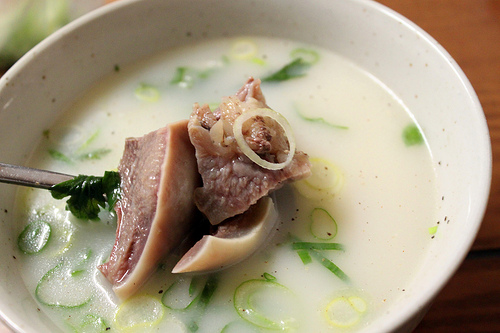 This is one of my favorites that I’ve been meaning to post since the early days of the Journal. Yet I usually didn’t have a camera when I ate it. It’s one of the scarier sounding soups in the Korean repertoire, but I find it the most satisfying.

Cow’s Head Soup goes by a few names, UduTang 우두탕, Someori GukBap 소머리 국밥 or just the literally “Cow Head Soup” SomeoriTang 소머리탕. Most places would understand you if you use the latter term, along with some miming.

It’s in the category of white beef stock soups, like GalbiTang, SeollongTang and Ggori GomTang. In my opinion, the head has some of the beefiest flavors. So if you can get over the grisly image, it’s pretty good. Little bits of cheek, fat and cartilage are thrown in. No brains. Just head meat.

(That sounds a bit dirty.) 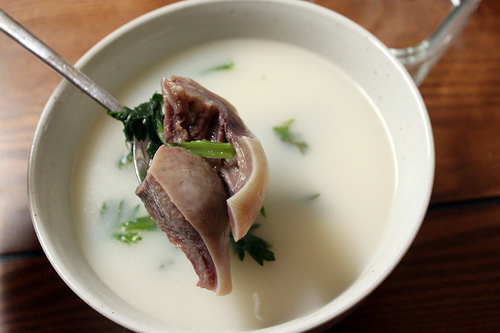 These chunky meat nuggets are packed with flavor and vary in texture, keeping the soup interesting. I also like that a few “medicinal” ingredients are thrown in, like daechu (jujubes) and ginseng.

It’s usually found in restaurants that specialize in GalbiTang and SeollongTang. As with many Korean foods, there is a city that’s famous for it–Gonjiam 곤지암 in Gyeonggi province. Sometimes it’s known as Gonjiam Someori GukBap.

Whatever the name, just treat it like GalbiTang–add some salt, pepper and sliced leeks to your liking. Be careful with the salt, as it’s easy to overdo it.

The result is a smooth filling soup that tastes like a Sunday pot roast.