A Cogent Argument for Dog Meat 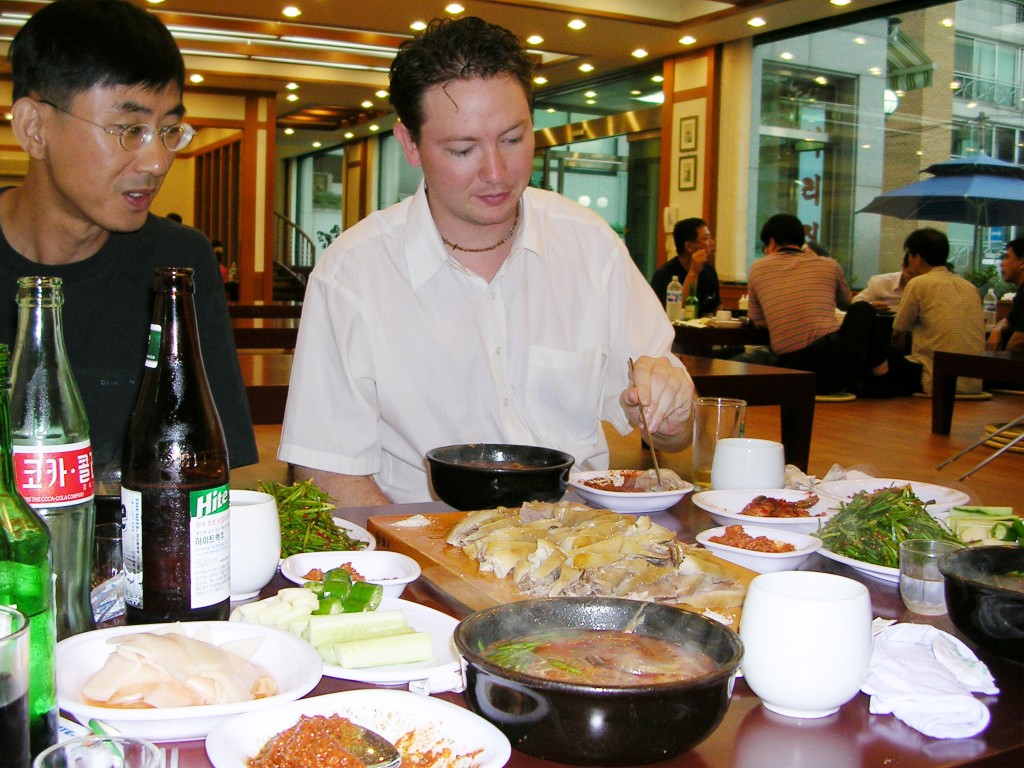 Joe trying dog meat for the first time in 2004

The Korean has translated and posted two columns by food writer Hwang Go-Ik about his love for dog meat. He addresses some of the controversies, and I think he humbly makes a decent rebuttal to the anti-dog meat dogma.

As I study Korea’s food culture, I feel that there is a certain attitude of cultural superiority within a certain class of our society. The people who consider themselves to be in a higher class has a tendency to eat different things, as if to show off, “You can’t eat this, can you?” But lately, this distinction has slowly eroded as restaurant industry developed. Food has been democratized, such that the dishes that were only available in five-star hotel restaurants are now cheaply available at any franchise restaurant. This trend hampers their strategy to distinguish themselves through food. I believe that the dog meat controversy is a part of the new strategy — to highlight their superiority by looking down upon what others eat.

The reason why I think the dog meat abolitionists are the same with Korean society’s cultural aristocracy is because of their rationale that dog meat is immoral. Food can be neither moral nor immoral, as much as a lettuce cannot be categorized as moral or immoral. But they seek to categorize moral humans and immoral ones on the basis of whether one eats or does not eat dog meat. This is how they reconfirm to themselves that they are on a morally superior position.

Read the whole translated pieces on The Korean’s site.

Sadly, he doesn’t address the issue of hanging and beating the animals for slaughter. But he does make a good point about the absurdity of deciding which species is moral and immoral to eat.

I personally draw the line on humans and endangered species. I’ve tried dog meat once, back in 2004, in both boshintang and as a steamed meat for bossam. The steamed meat was like a light pork. It wasn’t bad, but it wasn’t that spectacular either. I’d try it again, but obviously I’m not racing to the nearest boshintang joint. But just because I don’t eat it, I don’t feel it’s my right to tell whole food cultures that they shouldn’t.

The more I ponder the debate, the more I see how detached modern cultures are from the origins of their own foods.