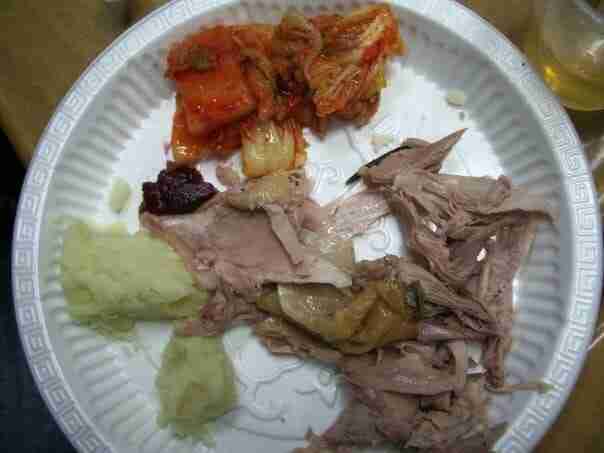 Saturday was a nice lazy day–except for poor Eun Jeong, who was suffering from a cold/fever. I spent the day cleaning, and I made egg nog that night. It was the best tasting egg nog I had made, but it was also way thick.

Chris wanted me to join everyone early Sunday morning for a pellet gun survival game. I didn’t want to wake up early, and I had a meeting at noon. I hope to join them next time.

The meeting was with The Korea Herald about a new section they’re planning to add, tentatively called “Expat Life.”

Even though I left at 10 o’clock for the noon meeting, I had a hard time finding the building. I always get lost in Seoul. According to my map, I could get out of exit 3 at Seoul Station. I had forgotten, though, that Seoul Station had two exits 3. I got out a little too soon. I eventually found the little curved side road where the Anglican church was and ran into the British embassy when Regina called.

“We’re waiting for you.”

She directed me across the church courtyard. I saw a Herald Media building and entered.

There was a bigger one down the road. Regina met me outside, and we headed up. Everyone else had already gone to the conference room.

Regina and I then tried to find the conference room. All the doors were written in Korean. On a directory, I found the Korean word for “Conference Room,” and we joined the meeting in progress.

Matt Lamers had assembled some of the best bloggers in Korea, including EFL Geek, Gypsy Scholar and the Marmot himself. The meeting only lasted an hour and was informative. Matt then treated us to pizzas at a nice Italian restaurant down the street.

I finally got to meet Robert “The Marmot” Koehler, even though he has been my editor at SEOUL Magazine for the past six months. He actually does wear a hanbok and is much funnier in person. I don’t know. I somehow had him pegged as this gruff serious guy.

Regina, Robert, Jeff (Gypsy Scholar), Andrew (an old writer from the K-Scene days) and EFL Geek (“Everyone needs at least two monitors”) sat at the end of the table. We were having such a good time talking that I lost track of the time. I was late, late, late.

At five o’clock was the CEA Christmas party, and I still had to make oyster bisque for it. I had bought the ingredients on Friday night and didn’t get around to making it on Saturday, thinking I’d have enough time on Sunday.

I walked with Robert and Regina to my bus stop at Shinsegae Department Store and didn’t get home until six. Poor Eun Jeong was dressed to go out but was shivering under the sheets. I gave her some aspirin and was about to cancel going to the party, but Eun Jeong told me to go. I was thinking of quickly making the bisque when I got a call from Chris.

“I got the turkeys, but I don’t have a knife. Can you bring one?”

So there was already a group salivating over the turkeys Chris got from JohnCook Deli. I had to rush over there with my egg nog and a carving knife. As I was heading out the door, Eun Jeong asked if I could leave her a cup of egg nog. I opened the jug and tried to pour it out. I held it upside down. It was so thick that nothing came out. I shook it, and some finally fell into the cup with a plop.

I took the buses to school and arrived to a nice crowd of adults and children. After the quick greetings, I headed to my classroom, where all the desks were put together to create a large table. On it were two large turkeys covered in plastic and foil. I set up my mise en place, which really was to make sure I had some plastic plates to put the meat on. I proceeded to carve one of the turkeys

I’m getting better at bird carving. 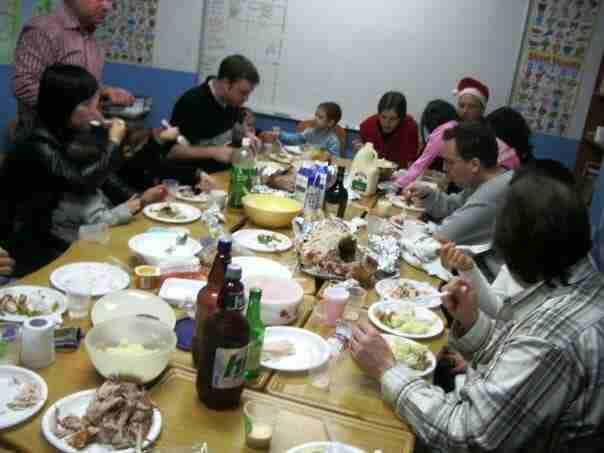 I made sure everyone had a full plate before serving myself, and I was starving. I only had two tiny slices of pizza for lunch.

I had mashed potatoes with cranberry sauce and some dark meat, skin and the pope’s nose, which I have discovered is the best part of a roasted turkey.

Honestly, even though I like the guy, it bothered me a little that one of the Koreans bought some ramyeon and ate it during the expensive turkey dinner. I understand not totally embracing other culture’s food, but I wonder how people would feel if I ordered a pizza during a Chuseok celebration. You know, just hold out a bit and eat when you get home. Don’t shun the $160 turkey dinner for a bowl of instant noodles. Am I wrong in thinking that was rude?

Shortly after desserts were served, Eun Jeong called and asked me to come home. I packed up some food and desserts (I made sure I had brought some containers with me) and said goodbye to everyone as the men set up the Santa gift-giving part of the evening. 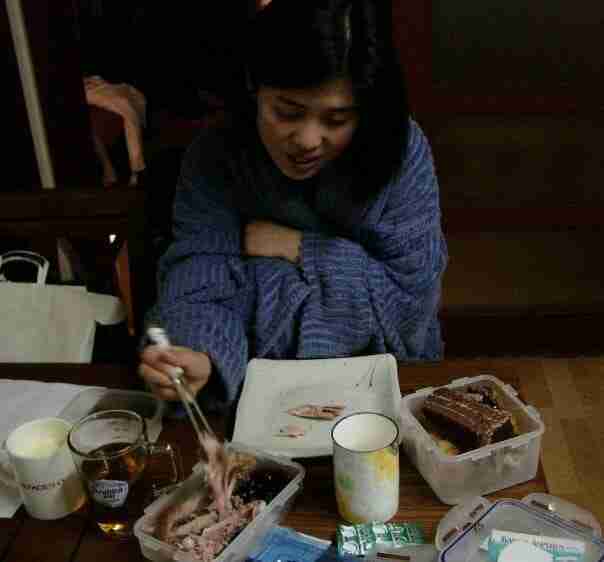 Poor girl felt better after having some turkey and tiramasu.

We had to work on Monday, Christmas Eve.

Chris wanted to have hamburgers together. He wanted Craze Burger, but I didn’t want to go out of town and rush through a lunch of overpriced burgers. We decided on TGI Fridays instead. It was crazy getting to Beomgye to get to the restaurant. 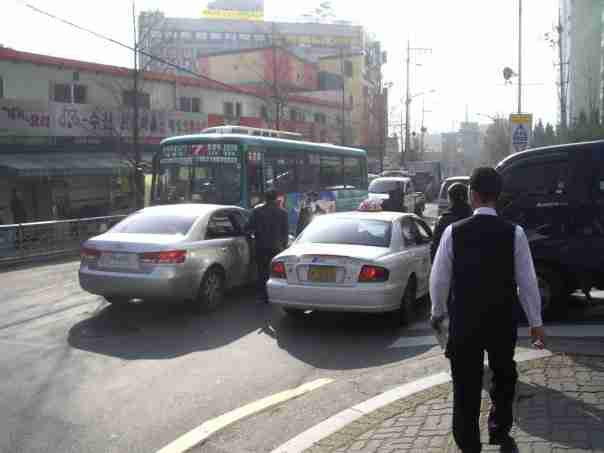 A car had collided with a bus, blocking the only route out of our neighborhood. So I got out of my own stranded bus and walked down the street to catch a taxi.

At the building that housed TGIs, I got lost in their elevator system. The rest of the building was going through some major renovations, and everything was covered in plastic, so I couldn’t find the freaking stairs, which would have saved me a lot of time.

The smell of renovations permeated the restaurant. And we both agreed the burgers were horrible grease bombs. Chris couldn’t even finish his, and we both felt horrible the rest of the day.

Classes went smoothly even though no one wanted to be there. Up until Christmas Eve, I had bought presents for everyone except Eun Jeong. Chris dropped me off at E-Mart after work so I could do some last minute shopping. Eun Jeong called on my way there to ask me to get some sushi for dinner. So there was my excuse for coming home late (hunting for sushi at E-Mart).

I didn’t get her anything big because we generally shop for big gifts together. I got her an exercise ball (she had expressed an interest in one), a little pewter tree to hang her earrings, a scented candle, in-house slippers and some candy and fruit.

I went downstairs to get the sushi, and they were all out of shrimp. She wanted all-shrimp sushi. I asked the guy at the counter if there was anymore shrimp. He looked and said no, but he said the crab stick was a decent substitute. I called Eun Jeong to get her opinion. She said to get some of the crab stick and some white fish sushi, like flounder. So I did, and the guy boxed it up.

I was about to leave when I myself got a hankerin’ for some sushi. So I got another box and started filling it up with the stuff I liked, like eel. While I was doing that, the sushi guy came out with a whole tray of shrimp sushi.

So I filled up half my box with shrimp for Eun Jeong.

I checked out, got on the bus and walked up to the apartment. On the way up, I had a nice conversation with a businessman, mostly in Korean. We live in the same building.

I had made sure that the checkout lady gave me two bags–one for food and one for gifts. I left the bag of gifts outside the door and entered. Eun Jeong and I had our sushi. She didn’t like the crab stick or the white fish, so I ended up eating most of both our boxes. She had the day off, and she was starting to recover from her sickness. She filled out report cards while I screwed around on the computer, waiting for her to take a shower so I could sneak the gifts inside.

We stayed up late, watching HanaTV, which she is starting to not like because everything on there is at least a day old. I woke up early in the morning and did the Santa thing, laying out her gifts and putting her new slippers at the foot of the bed, stuffed with tangerines and goodies.

She was thrilled, and it was the start of a truly nice day.

I opened the gifts I had gotten from my mother and brother. They got here before Christmas because I told them about What The Book in Korea, which made it easier for them to order me books for gifts. My mother got me Peace, Love and Barbecue and The Lee Bros. Southern Cookbook, which is HEAVY and very good (James Beard Foundation Cookbook of the Year). In fact, I found out that Mario Batali was using the cookbook for his own Christmas dinner. My chef brother sent me The Perfectionist and The Omnivore’s Dilemma.

The night before, I had made some traditional family Christmas breakfasts that required overnight chilling, Lost Bread and Sausage Egg and Cheese Casserole. I just needed to pop them in the oven while making coffee in the morning. The Lost Bread turned out wonderfully. The SEC Casserole was horrible because I used that nasty Costco breakfast sausage. That was the last chance for that sausage. We never ate it by itself. If it can’t meld and taste good with bacon and cheese all over it–it’s in the garbage. I had to throw away that whole casserole, along with the rest of the sausage in the freezer. Bye bye.

There was little Christmas programming on HanaTV. They had a Christmas section, but it was strange (Sleepless in Seattle?). We watched March of the Penguins and then spent the lazy afternoon watching most of Hell’s Kitchen season 1.

That evening, I called my mom. My sisters, niece and brother were there opening gifts, and they put me on the speaker phone. It was hard to decipher everything that was going on, and most of the conversation was, “Joe, are you there?”

The lack of sleep was catching up with me, and I started drifting off. After an hour of listening to them opening gifts, I called it a night. I wanted to call my dad, but he lived in an even later time zone, and I was sure he was still asleep.

So today we both go back to work. Then it’s a week vacation for me. Eun Jeong is planning to take at least a month off starting January 1st.