Well, Kurt’s gone. Miss Koco is leaving in a little over a week. Others are leaving too. I’m getting invites to farewell parties almost every other day. And, no, I they don’t have anything to do with the crazy new E-2 visa regulations.

Speaking of which, people are starting to panic a bit, mostly because information is so vague and changes all the time, depending on the source. It’s typical with Immigration and the Korean government, but these new rules are supposedly so sweeping and stringent, it affects people’s livelihoods.

I myself am a little worried. I don’t have anything that would get me denied a visa. I’m drug free, and I’m healthy. I have no criminal record. The only way I could have a hard time is if they started requiring credit reports. Yet then I’m sure most everyone would leave Korea since this is where people go to make money to get their credit straightened out. At least, that was the case for me initially.

Then again, Eun Jeong and I have been planning to get married, so I won’t need an E-2 visa, and this won’t apply to me. Something tells me, though, that we won’t get much clear information about the visa rule changes until after the December 19th election.

I’ve noticed that the base salaries of English teachers has gone up, as things do. I got an email from someone asking about the first school I worked at here. I gave it an honest and fairly positive review. I found out that they offered this person, who has no teaching experience at all, over 300,000 more won per month than they offered me in 2004 and pretty close to what I’m making now.

I guess it’s time for that raise, huh.

I’ve been fighting the cough all week. Eun Jeong’s been healthy, but she’s had some highs and lows. The job she has now is crazy. She was offered a job this week at the school she has been wanting to go to for a while. She wants to open a franchise of this very same school. The next day, the job offer was retracted. The Old Eun Jeong™ would have spent a week curled up in bed in despair. The New Eun Jeong™ is working hard to make a negative into a positive. She’s more determined now to open her own school. So she’s working on a plan.

She also forgot her keys last night and called me at work to inform me of that. I took a taxi home so I could get there quickly enough. I then had to rush back out to E-Mart to find cheesecloth or a close substitute. I found the latter.

I’ve been working all week getting ready for a party at Seoul Life Cat’s. This is the party I’ve been talking about for a while, originally planned for Chuseok at my place, moved to Thanksgiving, and finally Cat just decided to have it before Christmas at hers.

I’m using this as the opportunity to break out that foie gras I bought a few months ago. I’ve never even had foie before, much less made it. Back in the States, I usually didn’t have the expendable income to afford a restaurant with foie. In Korea, I can afford it, but it’s close to impossible to find–and at a premium price.

So I wanted to do this in a classic way, a torchon. My brother and I have been exchanging emails on how to do it. And I’ve done everything he said was too much of a pain in the ass to do. I’ll detail it later on the Food Journal. But here it is hanging on the balcony. 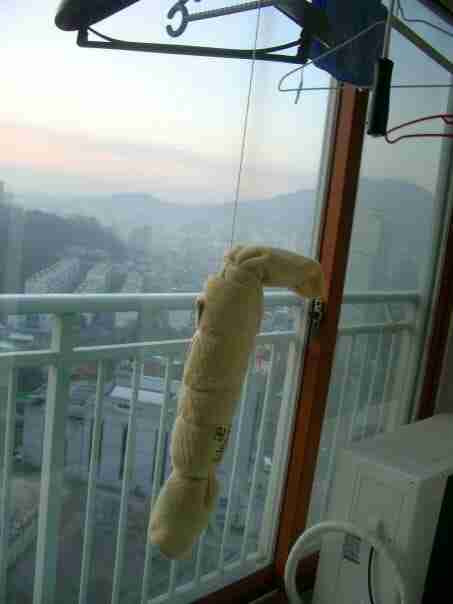 It’s been pretty cold and snowy this week, and I have no room in the refrigerator, so I thought I’d let it have a nice view.

In all this flurry, I’ve forgotten to get some alcohol. I guess I’ll deal with that when we get there. There should be a convenience store around.