The Expat Quest for Thanksgiving

Christina called me over to her half-basement apartment for Thanksgiving. This was my first year in Korea, 2004. She and Glen held this each year for expats and any Koreans who wanted to attend this exotic holiday with the mythical turkey beast—a foreign flightless bird not seen in a Korean refrigerator case. For a time, more turkeys existed in the Seoul Zoo than in supermarkets. 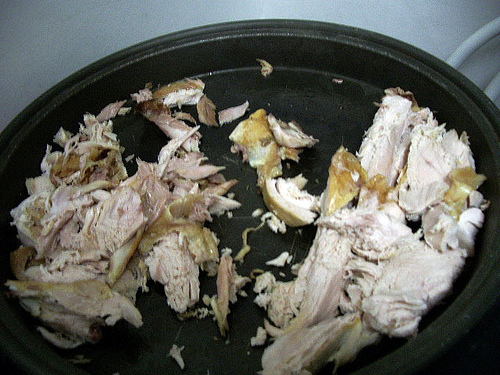 The quest for Thanksgiving is a rabid one in these parts. Expats are so culturally alienated that they cling to anything that reeks of home. Holidays are celebrated with more gusto than they were at home. Americans experience the Korean version of Thanksgiving, Chuseok.

No, they don’t because they don’t get invited to Koreans’ houses for it, and many take this time off to visit Southeast Asia.

Then Canada Day comes around—Oooh, Canadian Thanksgiving! Three Thanksgivings in one season. Yet Canadians are too nice and wait for the American one.

Soon after trying in vain to bring Halloween to Korea each year, the American and Canadian expat turns into a zombie-vampire on the hunt for turkey. They can’t explain why they want this particular poultry so badly. They just need it. 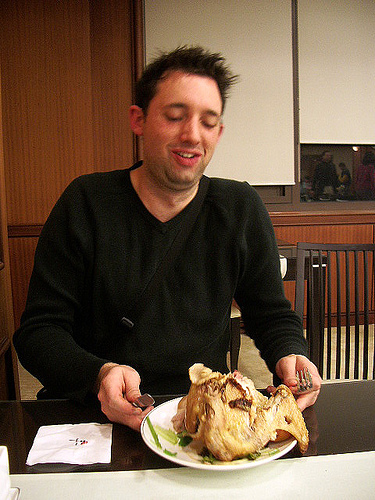 Networks were tapped. Information was passed along. Where could one get a turkey? Did anyone have a U.S. Army base connection? Did any of the foreign markets have any? Would anyone dare to get one from the black market in Namdaemun?

Am I the only one who thinks it’s strange that South Korea has a black market for foreign food? #protectionism

If one was able to get a turkey the next challenge was finding a person with an oven. Korean cuisine doesn’t use ovens. Since most non-military American expats are English teachers living in tiny dingy apartments supplied by their employers, they don’t have ovens either. The person with the oven becomes the most popular member of the community. One enterprising friend cooked an entire turkey using a toaster oven. 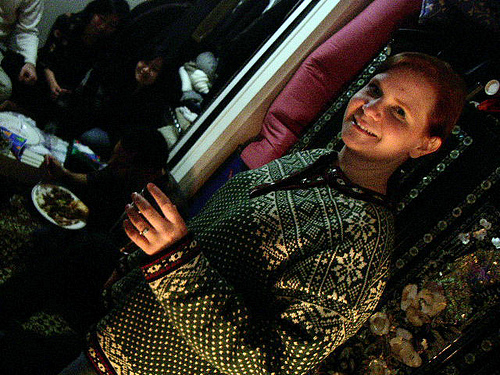 Christina and Glen were longtime expats by the time I arrived. They had a robust network of friends willing to show for Thanksgiving. They had two turkeys, some basic sides, and an open bar. They only requested people bring supplemental alcohol and maybe some desserts. The second most popular people in Korea are the ones with the Costco memberships. They’re the ones who supply the pies and cookies. 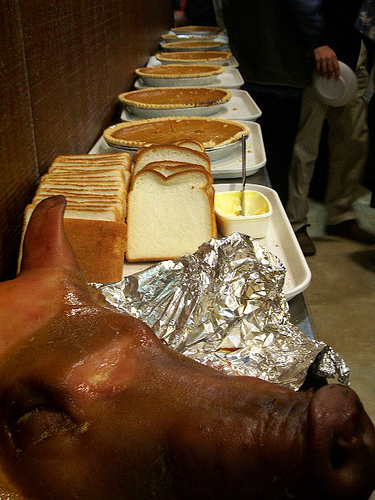 The refrigerator and coolers are stocked with pitcher-sized Korean beer bottles, green bottles of soju, vodka, some gin, some whiskey. Maybe some connoisseurs brought some wine or imported beers. They were generous or foolish because those would be the first liquids to disappear.

I think Christina and Glen knew from experience to discourage the bringing of side dishes. I’ve done the expat potluck before. And without a lot of coordination, you end up with five giant bowls of mashed potatoes of varying lumpiness. 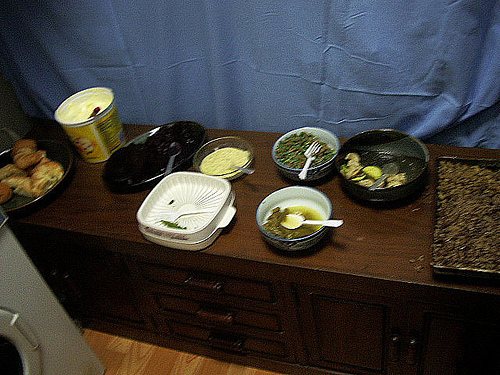 As long as there’s a bucket of butter

The sociological interest comes when the Koreans show up. Either they’re attached romantically to an expat guest, a co-worker of the host, or a friend of the host. Sometimes a whole family will show up, likely because the progressively thinking father thought it would be a good cultural experience for the children, and the mother thought it would help the children’s English. The expats want the Koreans to understand why they so passionately love this holiday. They want the Koreans to wax poetic over the turkey and the glories of Western culture that would mandate such a feast. 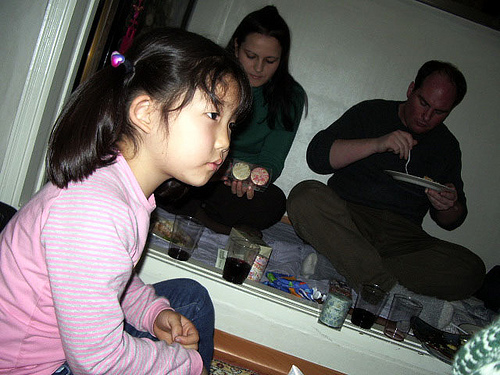 Then we get a little self conscious. All this food is variations on beige. It’s heavy. It’s soft and lacks textural variety. It’s crowded sloppily on plates and looks like something the dog threw up—if we didn’t crave it so much. Turkey tastes like chicken the same way many exotic meats taste like chicken. 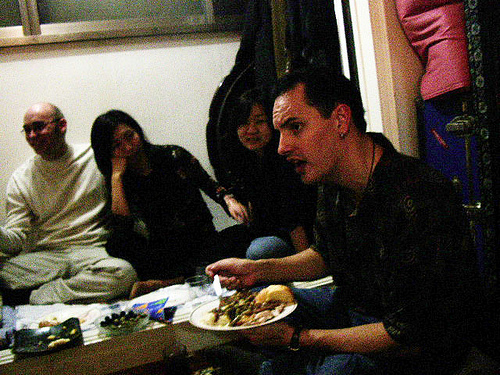 Glen finally sitting down to enjoy his meal

Even with the newfound epiphanies of how our traditions look to others, we get sorely offended when Koreans start piling kimchi on their plates. It’s like being invited to a Korean family’s celebration of Chuseok and ordering a pizza.

Can’t we just go one meal without the kimchi? 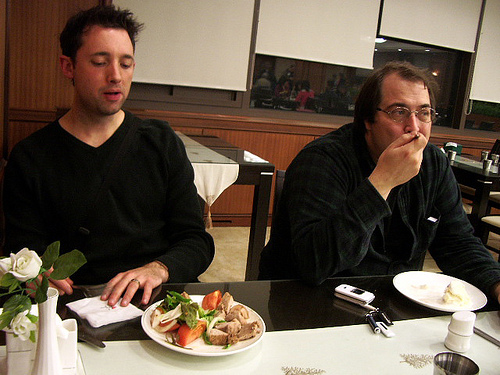 Diplomacy wins over, and some of us start agreeing that kimchi goes well with turkey. We overlook this routine cultural faux pas.

We chat with old and new friends, our slapped-together families in Korea. And then we drunkenly thank the hosts and leave—in one sudden wave. 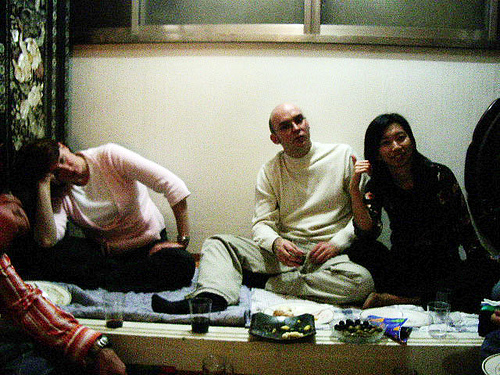 This was how I celebrated Thanksgiving my first few years. Others were willing to pay for expensive hotel buffets. To me, that’s like paying for sex. You get the biological need taken care of but not the emotional one. Since Korea didn’t recognize American Thanksgiving—why should it—we all had to work.

Thanksgiving kept fading away for me. Thanksgiving dinners devolved into going out for some smoked turkey BBQ and beers at a local Korean joint. Even that stopped. Christina and Glen broke up and moved away years ago. Most of my friends in Anyang are gone. I’m not in the mood to make more friends who will just leave in a year. I have my own Korean family now—and my wife hates turkey.

Thanksgiving Isn’t Given. You Make It.

I find it odd and amusing to see Americans back home treating Thanksgiving as if the whole world celebrates it. It’s such a big freakin’ deal. All the food blogs and magazines promote their Thanskgiving recipes—as if there are that many more variations left. Hipsters and cynics complain about being around their families, especially the brother-in-law who feels like it’s a good time to test the loud theories he has on what’s wrong with the world—theories he got verbatim from political talk radio.

The expat has no opportunity to be with family. It’s when this family is not available, when these traditions require a lot—a shitload lot—more work and creativity that the expat learns to truly be grateful. Things the expat never paid much mind to, even scoffed at, become suddenly precious.

As Thanksgivings pass, the bullshit fades. The turkey, the cranberry sauce, the football. The expat has been away from these things for so long that these are just layers of chocolate coating. The center is that feeling of family and belonging. The expat gets it.

I have no plans this year (2012) for Thanksgiving, even though turkeys and turkey dinners are more plentiful. Christmas has become my big holiday, and I started getting into that the day after Halloween. I don’t care. The expat has to create his own culture around him from scratch, so I choose to start Christmas early so I can savor its short life in the year. This year, though, we’ll be traveling to America for the big holiday. I haven’t been in America for Christmas in almost a decade, and my little family has never been to America. This will be  a big deal.

So this Thanksgiving, I likely will catch a bit of the Macy’s Thanksgiving Day Parade streaming live—in the evening–or watch a bit torrent I downloaded in 2010. Likely I’ll be busy packing Korean ramen and getting my family to score some kimchi in America so my wife can have some with her turkey.

It’s been a few years since I’ve posted this. The kernel came from a friend who was, at the time, an editor at BonAppetit.com. When I pitched this idea to him, he felt it was too bleak for Bon Appetit, but he encouraged me to post it anyway.

It’s easy to get a turkey these days at Costco, as long as you do it in October. Most every western-styled restaurant has a Thanksgiving event. I am still of the solvency that a restaurant Thanksgiving is like paying for sex. The trick is, how good is the sex you’re paying for.

I still miss Christina and Glen. They were the rocks I clung to in my early years. They have each gone to better futures.

The past couple of years, I have celebrated Thanksgiving with Korean/American neighbors. As I mentioned in my post, we’re a little more hardcore about it. We all have children with mixed backgrounds. We want them to immerse themselves in Korean culture while dipping their toes into our endemic cultures.

The past two years, the turkey has been good. But really the food hasn’t been the priority. It’s been the family. We truly create family wherever we go. It’s so cliche, but I’m thankful for them. I play the Macy’s Thanksgiving Parade on YouTube. No one pays attention but the Americans, but it’s fun in its monotony. “SpongeBob’s balloon is coming!”

I’ll admit that I feel an advantage over my biological family. The group I celebrate with comes from various backgrounds. We had a Louisiana gumbo and a Canadian maple glazed turkey. How FREAKING awesome is that?

The discussion wasn’t over Trump but over apartment prices, which is the top concern in Korea. (not North Korea, asswipes)

It’s been good. I love this family we’ve created. We had an American-Canadian-Korean Thanksgiving this year. No kimchi, but there were Chuseok style skewers. Quite welcome, because THEY’RE AWESOME. The biggest controversy in our Thanksgiving was whether you’d eat your skewer like corn on the cob or deep throat it.

And as a joke, I gave the kids popcorn as hors d’oeuvres as a Charlie Brown Thanksgiving.

Korea has gotten a shit ton better in the few years since I wrote this. I sorta miss the scrappy days, but no–not so much. Christina had an actual mountain spring water source coming from a rubber tube. That was cool. I miss her. I miss that time. I miss the scrappiness of the people. These days expats in Korea are WAY too entitled. They don’t appreciate what their forebears bore to establish this firmament of Thanksgiving. They whine. They rant.

But they were never here back then.

Please folks. This was the point of this whole post. It’s about BEING THANKFUL.

I love what this amazing country has given me. I love how much it has changed. I love the revolving door of friends that have entered and exited my life. You have all have made me who I am.  It’s an epic tale.

I look forward to epic tales to come.