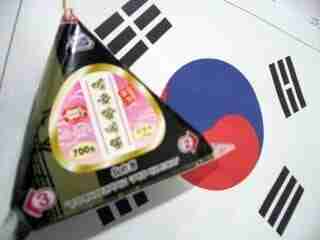 These things can be intimidating if you don’t know what you’re doing. Yet these are great inventions in South Korean junk food. It’s called “samgak kimbap” 삼각김밥, or triangle kimbap.

It’s the most basic of basic convenience store snacks. What makes them interesting is that they come in many flavors. New flavors are popping up all the time. You can get Jeonju bibimbap, tuna and mayonnaise, tuna and gochujang, tuna barbecue (my favorite), tuna with fish eggs, charcoal grilled galbi, chicken galbi, crab salad —

When I don’t have time to eat breakfast at home, I tend to get one or two of these things to rip open before class. And as far as junk food goes, they’re not that unhealthy. And at 500 to 700 won a piece, they’re economical.

The trick is opening them, which is something I’m still trying to master. You have to get a fresh samgak for it to work right. But it’s always a crap shoot as to whether you have a fresh one. Busy convenience stores tend to have them in the morning. The samgak I’m having for breakfast here is galbi jjim.

First, peel the strip down the middle, carefully tearing through the label. 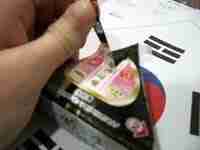 Hold the samgak firmly in one hand and grab a bottom corner with the other. Tug it off. Then pull off the other one. Carefully. 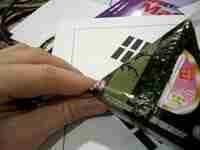 If you’re successful, you’ll have a complete samgak without any of the very salty crunchy seaweed (kim 김) coming off. 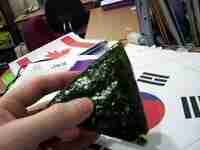 Inside is a molded triangle of rice with a dent in the middle. In this case, it’s filled with a galbi jjim mixture. Basically it’s cheap (read: throwaway) cuts of pork mixed with spicy sauce. It’s pretty good. 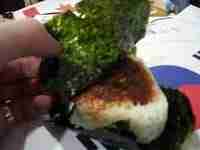 Some people like to heat them in the microwave first. I like to have them straight. And with so much rice in there, it’ll fill you up for a while. Now, if someone could take this to the next logical step and make samgak sushi. 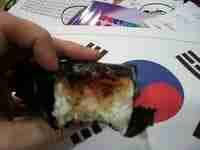