The Korea Herald stirs up debate over banchan 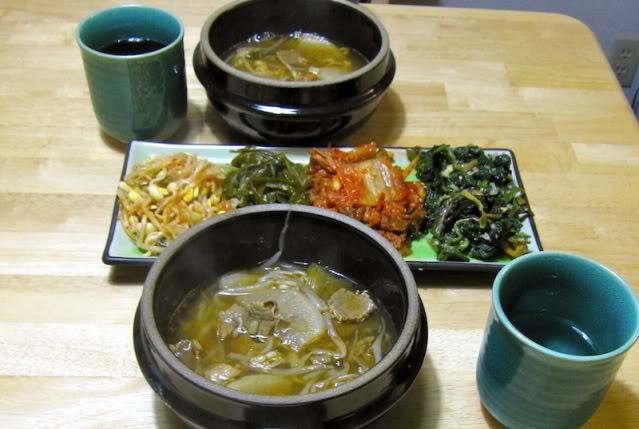 Imagine if a Korean restaurant gave you a menu of banchan (side dishes) and allowed you to pick desired items, just like you do at home? (Tammy Quackenbush photo)

“Putting value to namul (herb) dishes, for example, will create demand for variously priced namul. The story of how namul is picked by hand on the mountainside in springtime will add to the value of namul.”

Most of the interview discussed the South Korean government’s continuing efforts to popularize Korean cuisine around the world. He said many Korean restaurants compete with each other on the selection and number of banchan dishes.

“It is also responsible for the tremendous waste of food. More than 1.3 trillion won is wasted every year as food garbage.”

I strongly agree. Food waste is a real problem in the country.

On Cho’s assertion that the premium would create demand for banchan, my gut reaction was, You’re kidding, right? Or as I wrote in a Facebook thread I set up discussing this article, “Yeah charging for banchan is 바보.”

However, charging a modest fee for banchan could increase the popularity of particular dishes with careful banchan menu planning, marketing and advertising. Growing on Cho’s notion of niche namul, a chef could craft such a menu made up of seasonal bounty with detailed descriptions of the quality, origin and preparation of ingredients. Similarly, savvy vintners of high-end wines, makers of seasonal craft brews and farmers of organic produce have been able to convince consumers to pay a premium via a well-told story.

Allowing customers to select their side dishes would alert the restaurant to which banchan to keep offering and which to discontinue. This would reduce food waste and give a competitive edge over restaurants with gratis grub. Yet blindly billing for banchan or setting up a restaurant that only serves banchan will not help popularize the dishes or the restaurant doing so.

You can find Joe McPherson’s slightly contrary view on this same article, which he called “Cho Tae-Kwon’s “Noblisse Oblige.”