You loooooooooove bulgogi, but you don’t want to go out to a Korean restaurant. You’re still jonesing for some of that awesome Korean grilled meat, yet you don’t know how to make it at home. Maybe you think prepping bulgogi at home is more difficult than it really is.

Well then, you have a couple of choices. You can go get the prepackaged marinade (such as the ones that CJ Foods carry under their premium Korean food label Bibigo) and some thinly sliced sirloin, or other premium cuts of beef, and just throw them in a zipper bag then let it do its thing for a couple of hours. The other choice is to go to your local Costco Wholesale Warehouse and buy yourself some pre-marinaded bulgogi. 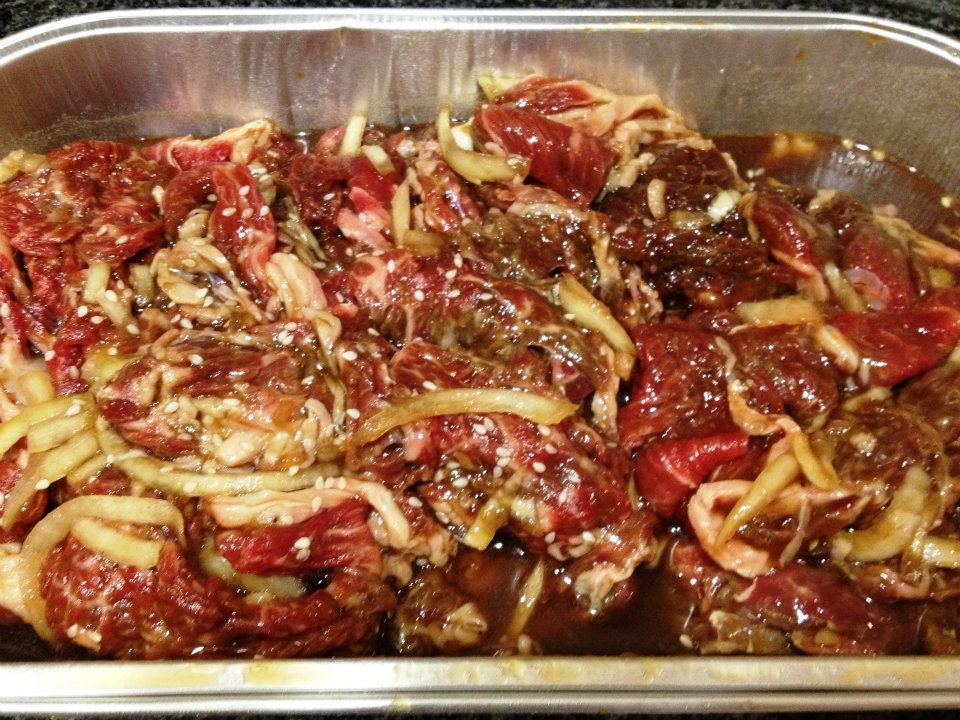 In the San Francisco Bay Area region, there are a handful of Costco Warehouses that offer bulgogi in the meat section. I’ve been meaning to try this out since Costco’s meat is probably the highest quality meat a regular consumer can purchase. The bulgogi is prepared at each location with USDA Choice grade beef, is currently being offered at $4.99/lb. and comes in about a 3-pound batch of marinaded beef in foil containers. That’s some bargain pricing, even for Costco standards. I will reveal, later in the article, why it is offered so dirt cheap. 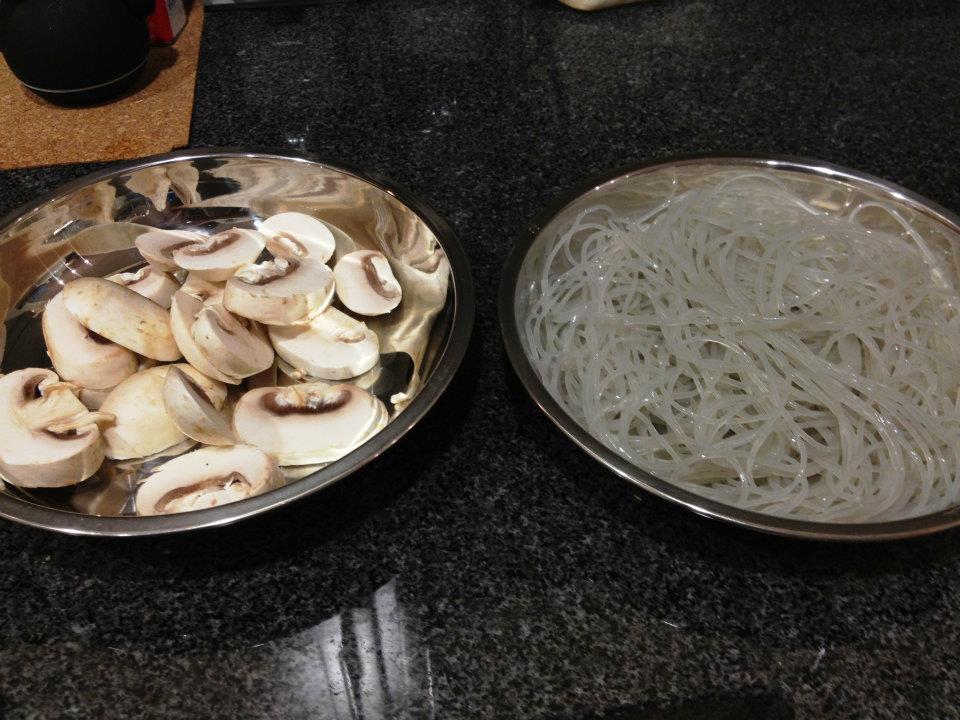 I also happened to pick up some mushrooms and dangmyeon (Korean starch noodles) earlier in the day, so I decided to cook the bulgogi in a jeongol (Korean hot pot) style. Usually jeongol consists of meat, vegetables, and noodles in some type of broth. So in this case, it’d be marinated beef, dangmyeon, mushrooms, and some good old water as broth. I would actually throw in a handful of baby bok choy or spinach in there but didn’t have any on hand. Don’t forget to soak the dangmyeon in hot water for about 20-30 minutes prior to cooking the beef.

First start by heating up a large frying pan or skillet at high temperature. Then carefully arrange the marinaded beef in the pan. When the meat is starting to cook, push it aside neatly and put the noodles and the mushrooms in the pan. Because I was making dinner for two, I only had to use half of the container, or 1.5 lbs, and the water (broth) ratio was about 1/4 cup. After the water/broth, keep mixing and stirring to avoid any burns. When your beef has achieved the desired level of doneness, plate the dish and garnish with some chopped green onions and toasted sesame seeds if you have them. 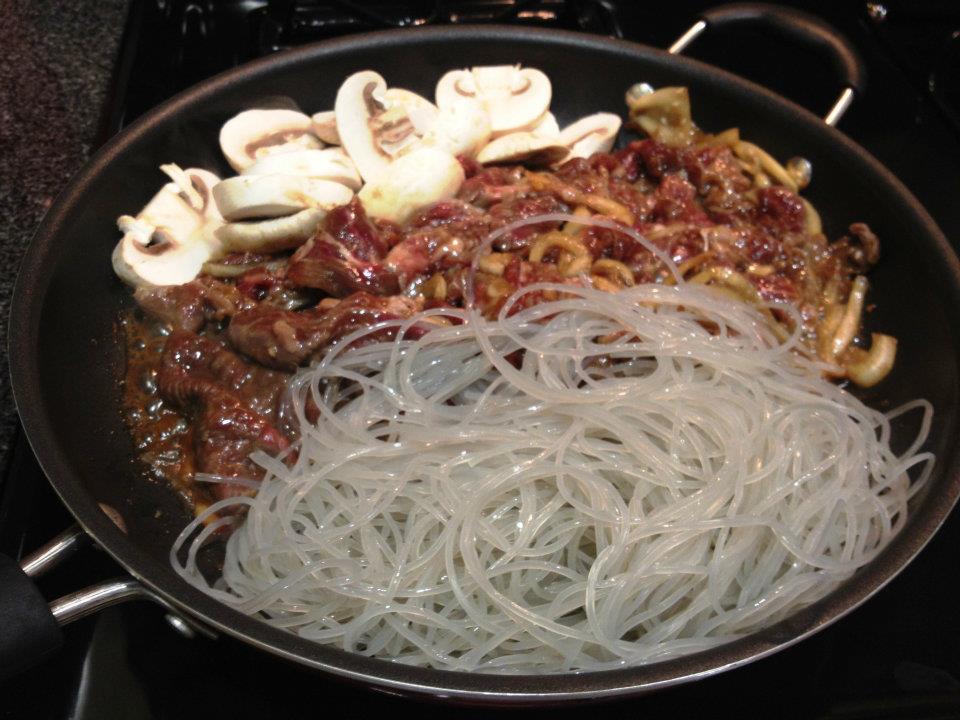 The best part of cooking the bulgogi in the jeongol style is that the dangmyeon noodles will soak up the essence of the beef, and you can enjoy the bulgogi taste twice in one dish!

And now to the ‘review’ part of this article…

Looking past the ingredients and Costco’s use of some unnatural stuff, such as high fructose corn syrup, the taste of the bulgogi dish is actually really good. One caveat, however – remember the cheap pricing? Yes, it seems that Costco decided to use some of the leftover trimming from the other cuts of beef in this bulgogi, so you will chew on some connective tissue. Although, not to the level that will ruin your dining experience.

Despite the use of sugar AND high fructose corn syrup, the beef is not overly sweet. The texture of the beef is great – it is Costco USDA Choice grade beef after all. If you don’t mind doing the actual cooking, you won’t be missing out on the authentic Korean restaurant taste by having dinner at home.

Now, when it comes to bulgogi, you have to have the mandatory ssam (Korean style lettuce wrap)!

Recently, CJ Foods sent me a sample pack of their new premium line of Korean food called Bibigo. In the package, there was some gochujang (Korean chili paste) and ssamjang (Korean style lettuce wrap paste). Unfortunately, the ssamjang was too sweet and salty for my taste, but the gochujang was pretty good. The texture, consistency, and the heat level were right on the money. The spice level is medium, it’s tamer than Tabasco sauce and comes on smooth. I found it to be the perfect condiment in this application. If you do not know what ssam or ssambap is, it’s just a simple lettuce wrap featuring red leaf lettuce (or green lettuce), some rice, meat, and any or all of the following: sliced raw garlic, grilled onions, sliced chili peppers, gochujang, ssamjang, and or doenjang.