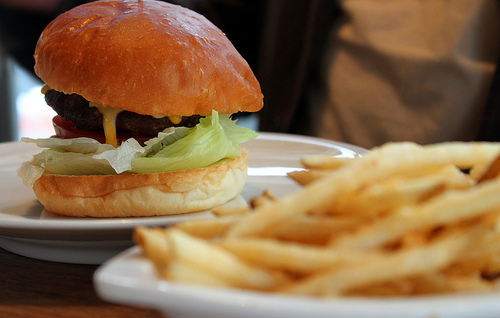 Burger and fries at Burger B

In the past few years we’ve witnessed a bit of a burger renaissance in Korea. The flat discs sold by McDonald’s and Lotteria were getting thick makeovers by new restaurants. Now it looks like a new fancy burger chain opens each week. Some are awesome (Burger B). But many of them still don’t get it and are just jumping on a trend without thinking about its roots and meaning. You could say they’re over-Koreanizing a foreign food, but actually, the Koreans I know prefer the more American style burgers of Burger B and Chili King than the ones these other restaurants are pumping out.

Here are some guidelines if any Korean hamburger restaurateur cares to listen.

There’s a tendency when cultures adopt foreign foods to sweeten them. Korea takes this to an extreme. The method of choice is usually honey mustard. With burgers, they’re smothered in cloyingly saccharine bulgogi sauce with sweet pickles. They turn their burgers into candy. We’re not children. We don’t need candy for our meals. Cut back on the crutch of sweetening every effin’ burger, sandwich and kebab. 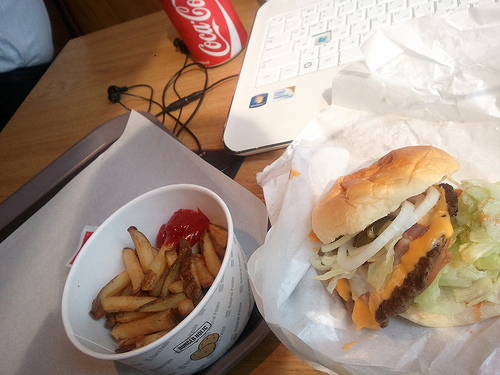 Burgerholic. Where’s the beef? Note that the burger arrived in that much of disarray.

To quote Shakespeare, “Brevity is the soul of wit.” And simplicity is the key to great food. If something is perfectly fine with just a few ingredients, don’t fuck it up by packing a lot of junk into it. Three different sauces doesn’t make a burger better. They make it confusing and muddy. The perfect burger has quality simply seasoned meat, fresh vegetables in their prime and a satisfying bun. Throwing all this other crap on there just shows that you’re covering up your mistakes. Think of balance when putting together a burger and don’t just throw a giant handful of iceberg lettuce and mealy unripe tomatoes on a puny meat patty. And if your menu claims to have items like “onions grilled in balsamic sauce” make sure they are onions grilled in balsamic sauce. 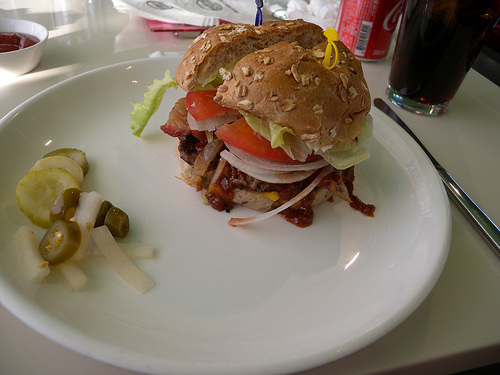 It’s not haute cuisine. The classic offender of this sensibility is Kraze Burger. This chain is supposed to look like an American greasy spoon diner, but they got rid of the greasy spoon. They look like sterile museums of diners. On top of that, burgers are supposed to be eaten with the hands, not forks and knives. It looks silly–like eating ribs with forks and knives. If I see people in the window of a place eating burgers with utensils, I immediately know it’s a place that caters to people who really don’t understand burgers.

Also, I understand that beef isn’t that cheap here. But some of the better burger places have proven to the public that a simple standalone burger doesn’t need to be W13,000. You’re just ripping people off. Yeah, there may be a line out your door because of some fake hype, but one day you’ll run out of rubes. And don’t treat your customers like assholes. 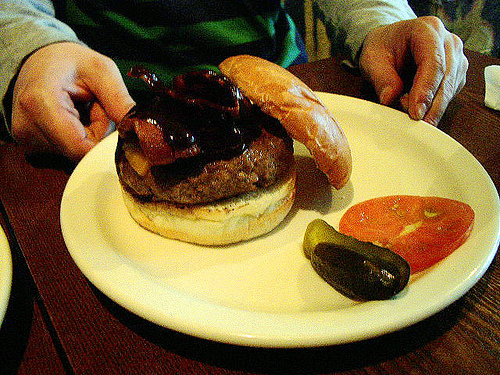 Smokey Saloon. Before the perma-line got established out the door.

Referring to the previous point, if I’m paying W13,000 for a simple burger, fries better damn well come with it. Now, everyone has their preference for style. I like shoestring and McDonald’s style fries and not really school cafeteria style crinkle cut (exception is Chili King). I guess it’s because I can taste the freezer burn more easily in the crinkle cuts. Fries are part of the burger experience. The good places that do charge over W10,000 for burgers include fries and sometimes drinks. If you’re charging over W10,000 for a burger and no fries, there better be something special about that burger. It’d better come from some Hallal-Kosher sake-fed massaged Wagyu cow that was slaughtered and prepared by virgins. Otherwise, well, you’re just a cheapskate-slash-fraud. 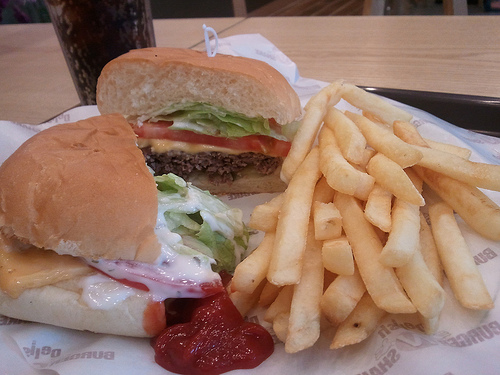 Burger N Shake. What makes this healthier than other burgers? Really?

The “well-being” craze is a joke when it comes to fast food. Here’s a hint. If you have a deep fat fryer in your store, YOU’RE NOT WELL-BEING!!!

When people want to eat healthy, they don’t go to burger joints. When you throw that “well-being” Konglish in there, it immediately tells people that you’re an idiot, you think your customers are idiots and that your food sucks.

The sad irony here is that the places that call their burgers “well-being” are anything but. A simple hamburger is not the healthiest food in the world, but the vegetables and protein work fine on their own. The “well-being” places inject their burgers with calorie and high fructose corn syrup laden sauces and soggy bacon, turning a simple well-rounded food into a diabetic monstrosity.

Some of these places even have brochures touting their healthiness. Seriously guys, if I wanted health food, I’d go to the boribap place next door. When I want a burger, I want a treat because that’s how a burger should be treated. It’s an occasional guilty pleasure. It shouldn’t be part of anyone’s daily diet. So by trying to fool customers into thinking your food is healthy enough to be eaten on a daily basis is pure evil. It’s sleazy. It’s pathetic that McDonald’s gets all the flack for being unhealthy, but they never claimed that their food was healthy, and they discourage people from eating their food on a regular basis. 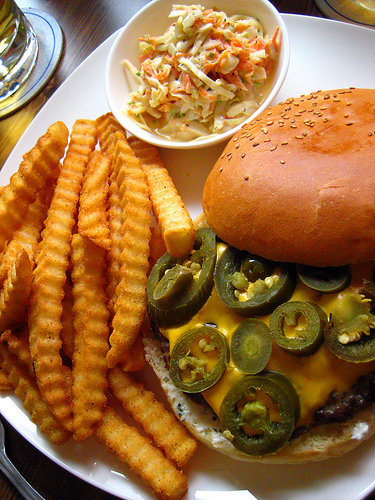 Despite this rant, I am happy with the way burgers and other cuisines are going in Korea. The progression is going well. There’s just this habit in Korea of serving food without thought. People think I made up the story of Korean restaurants serving nachos with whipped cream instead of sour cream because they likely were just copying pictures of food without actually trying to understand what they were cooking. But just last week, Jennifer “Fatman Seoul” produced photographic evidence of whipped cream topped nachos in swanky Gangnam. The message is that some Korean restaurateurs stubbornly refuse to get it.

There are some, though, that do get it. Either they’re owned and operated by people who come from burger cultures, or they’re run by Koreans who worked hard to research how to make a good burger and the culture that came with it. Below are the ones that come to my mind (that I’ve actually sampled). I know that some people will proclaim that Kraze and Smokey make decent burgers. Yeah, they do. But there are so many better options out there that we should recognize and support them. It’s a pity when someone who does it right goes out of business while the forces of culinary evil win.