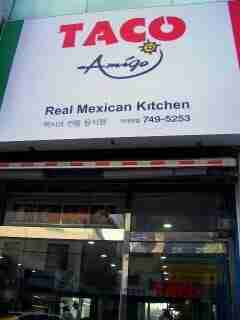 My birthday was Monday. On Sunday, a handful of friends met in Itaewon for an Indian buffet dinner at Chakraa. Yes, it’s the same Chakraa that ran the Valentine’s Day promotion. As I mentioned before, I’m on their email list. I knew of a special buffet promotion that weekend. In fact, they had knocked down the price even more when we got there.

Earlier that day, my girlfriend suggested we meet in Itaewon earlier. She wanted to get me fitted for a suit she was buying me for my birthday.

Get it? Birthday suit?

Her job as a tour guide made her an hour and a half late. So I killed time by wandering around, trying to find new businesses (read: restaurants) in Itaewon.

If you don’t already know, Itaewon is the neighborhood next to the U.S. Army base. It’s set up as a special global tourist village. In reality, it’s like a foreigner ghetto. It’s not a tourist spot in the sense that Disney-sponsored Times Square is a tourist spot. It’s more like the Mos Eisley space port from Star Wars. You know, the one that prompted Obi Won Kenobi to proclaim, “You will never find a more wretched hive of scum and villany.”

Nonetheless, it is the place to go to get your international food fix. There was one place that I was looking for and couldn’t find. Taco Amigo. It may be the second or third Mexican place in Itaewon, and it’s fairly new. I welcome any Mexican alternative to Pancho’s, the major Mexican restaurant on the strip. I’ve eaten at Pancho’s twice, and both times the service and food got me depressed. Taco Amigo was supposed to be a fast food taco joint.

As always, I found it right when I gave up looking for it. It’s down the street from Burger King, behind Gecko’s and Memories German restaurant. The menu is pricier than Taco Bell. But again, the ingredients are much harder to come by. And they are much cheaper than Pancho’s.

I bought a beef fajita and a beer. While I waited for my order, a Western looking man with a North American accent walked in and talked to the staff. He looked at me and asked, “What are you reading?”

“No, what are you reading?” 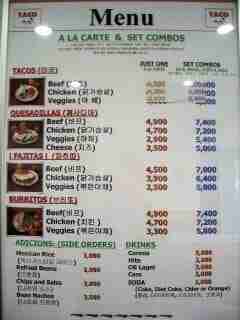 We talked a bit about my book. While I ate, I figured out that he was the owner of the restaurant, Wayne. He seemed like another outgoing memorable Itaewon character, like Gunther from the Three Alleys Pub. We had a great conversation, trading information on how to get Mexican ingredients in Korea. He told me that there is one tortilla manufacturer in Korea.

So I may not have to get frozen dried out tortillas shipped in from overseas. He had to leave before I could probe his brain more as to how to get my hands on these domestic tortillas.

The fajita itself was pretty good. Wayne supplied me with a handful of hot sauces that are difficult or impossible to get in Korea, particularly the chipotle sauce.

The restaurant offers basically tacos, quesadillas, burritos, and fajitas in beef, chicken or veggie varieties. I personally would like to see pork as an option. Pork is heavily used in Mexican cuisine, and I’ve grown to prefer Mexican food using pork, good fatty pork. And I’m sure it would be a much more affordable menu item in Korea. Taco Amigo is definitely going to be a regular Itaewon stop for me. 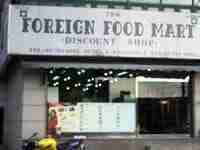 I had a few more minutes to kill, so I picked up some lamb at the Foreign Food Mart. It’s near the mosque, next to What the Book. It’s muslim owned and is a great source for inexpensive Halal lamb. I have noticed that their variety of Halal meats has increased, along with foreign goods outside of Middle Eastern/Pakistani/Indian traditions.

Eun Jeong was hungry when we met. I coaxed her into going for a quick snack at another restaurant I wanted to try, Ali Baba. Ali Baba is up the street towards Thai Orchid. It’s an Egyptian themed restaurant with nice decor. We ordered a falafel sandwich and a tabouleh salad. 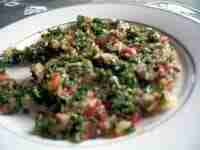 The tabouleh, to my surprise, had no grains in it. It was nice and light, though.

The falafel sandwich exceeded my expectations. It was light and spicy with a great sauce. And it won by also being cheap. Eun Jeong had never tried Middle Eastern food, but she was impressed and said she would go by there again for lunch, since her office was next door. The service, though, was slow and a bit sloppy. I didn’t feel too welcome there, like we were disturbing their lazy Sunday.

We finally met all our friends at Chakraa. I had been here once before, way back when John Kerry was running for President (remember that name?).

The floor manager waited all the tables himself, and he was very patient and personable with our group. The food was good and spicy, not toned down too far for the Canadian clientelle (cheap shot). And there was an endless supply of naan bread. I particularly liked the chick peas and the lamb. I could barely take advantage of the buffet because I had eaten the cuisines of two other countries before arriving.

But I did give it a good shot.