Crispy Onions Rings made with SOJU! 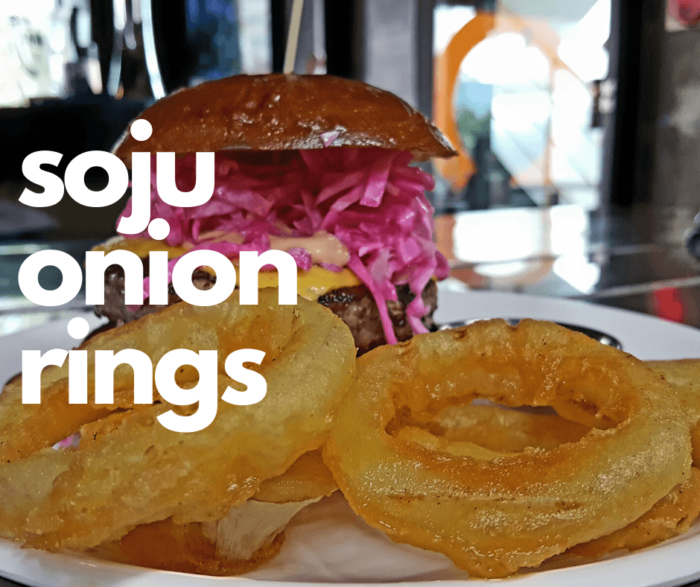 Sometimes we make mistakes at the restaurant. They’re not big mistakes. The fry station will sometimes make too many of an item. Or really, they make a few extra onion rings or fries just in case a couple don’t turn out. The extras we dump into a bowl as the evening progresses. If we end up with a good amount by the close of business, we like to cover it in chili and call it a “Dump Truck,” enjoying it with that post-shift beer.

I’m telling you this because one night, I delved into the Dump Truck and noshed on a multi-hour old onion ring. It was still light and crispy. Not greasy. It came from our new little experiment that we’ve implemented at OK Burger on the Cheonggyecheon.

There are so many ways to make onions rings. The thing is, they’re temperamental. It’s hard to get them just right, and when you do, they deteriorate quickly. A lot of foreign bars in Seoul use beer batter, and it works just fine. We were using beer batter here. It’s classic. The thinking is that the bubbles in the beer help lighten the batter as it fries, making light onion rings. But as we all know, anything with carbonation goes flat. So really, you end up with flat beer batter. It flavors them just fine, but they can feel heavy after a while. One thing that living in Korea has opened my eyes to is how heavy fried foods can make you feel. Being on a diet of non-fried foods has made me more sensitive to onion rings, fish and chips, and my old favorites.

The challenge is that I wanted to make them lighter. Maybe more of a tempura style. One way I had known in the past was to use club soda. That’s how some Japanese tempura chefs do it. Like the beer, though, you need to use it right away. Then I heard about some places in America that were trying something new–vodka. The science is that vodka has a lower boiling point than water. It evaporates more quickly, and frying is basically just rapidly drying out foods. So foods fried in a vodka based batter come out lighter. Now, vodka is still quite pricey in Korea. But we have one very affordable substitute. 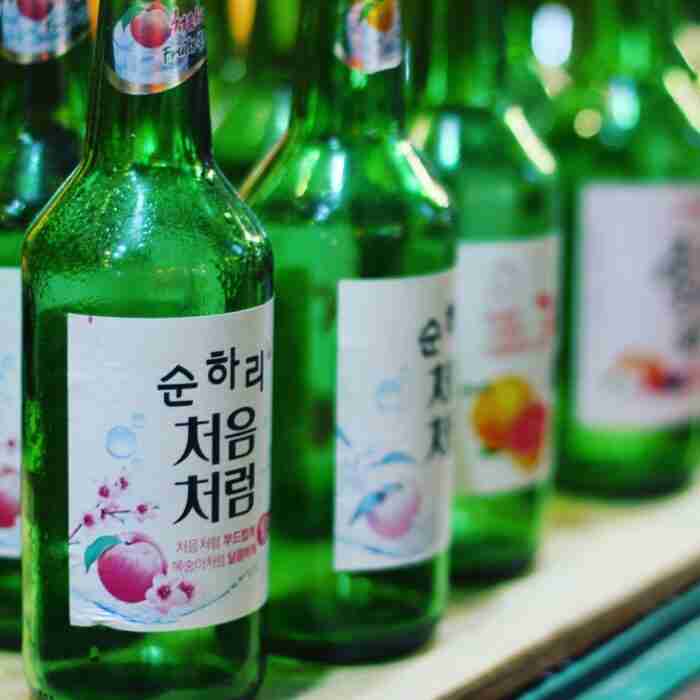 It was under our noses all along. It took a few experiments, and we had staff and customer volunteers try them. They couldn’t taste the soju, but they liked the crispier texture. The trick was getting the right ratio of frying powder and soju. Doing it like you normally make beer batter made them too much like tempura. That’s a good thing if you want tempura. It’s mesmerizing watching the batter hit the hot oil, bloom out, and crystallize like crispy snowflakes. When they’re that delicate, they’re difficult to season. The crust just disintegrates and falls off, and you’re left with naked onions. You want something more akin to a thick pancake batter. And really, it works!

At OK Burger we serve them with our housemade smoky ketchup, and they’re addictive. We’ve noted that plates that go out with onion rings on them come back empty.

UPDATE: OK Burger on the Cheonggyecheon is now closed, but you can still do this at home.