The doctor has officially pronounced it. The government’s Korean food globalization campaign was an expensive failure.  Well, maybe not a total failure. It did enrich the pockets of a lot of charlatans with government connections (we weren’t one of them, DARN those sour grapes!). I remember people calling us out on the blog as haters for pointing out what is finally coming into the light. There were so, so many things wrong with this campaign.

Recently, though, they started going on a more sensible track. The New York Korean restaurant guide was good. And I recently got my hands on an intro to Korean food book by them that almost sounded like it was written by us. (So, of course, it was good.) But then they come out with silly insecure articles like sperm counts on men eating traditional Korean food versus hamburgers (which they stereotype as being traditional “western” food). The jokers at VANK couldn’t be outdone, so they did the Mediterranean Diet vs. Hansik (HT John Francis Power).

In what culinary PR textbook does it work to promote your cuisine by telling your audience that their own cuisine is shite? 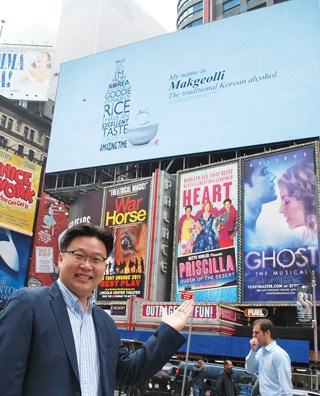 Now, the government shouldn’t get all the blame. A lot of the most head-scratching campaigns were the brainchilds of self-declared PR “expert” Seo Kyoung-duk (NYT ads, WSJ ads, Times Square ads, Bibimbap Wanderers), who once said, “The day I close my eyes, I want my people to be as powerful as the Jews and the Chinese.”

Supposedly, he claims that he gets his funds from netizen donations and private sources–at least, now he does. Still there is no indication as to where he got the money to do his first full-page ads in the NYT on his visiting professor’s salary. I smell a rat.

Send your complaints to mulitul@hanmail.net.

So anyway, here’s a quick summary of what’s been going on here and in Korean food this past week. 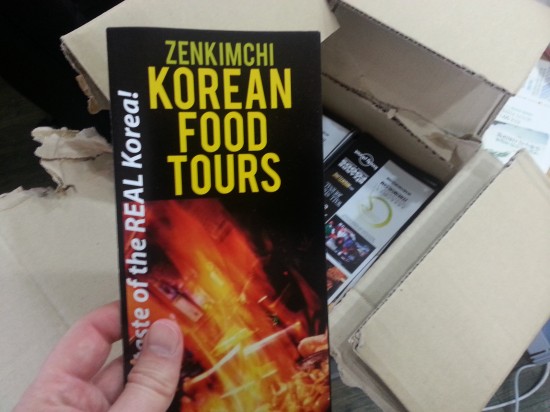 Our new brochures are in, and they look great! 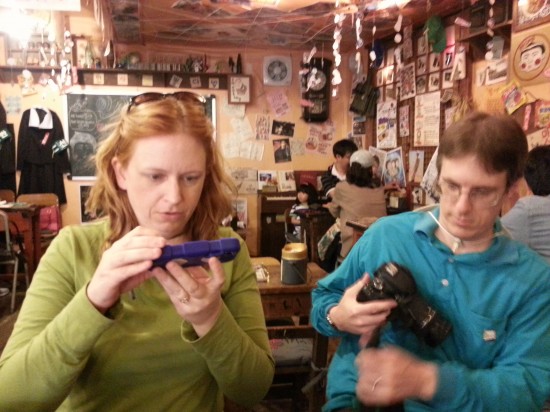 Finally got to meet our editor Tammy and her husband Jeff in person. Yeah, can you believe it? 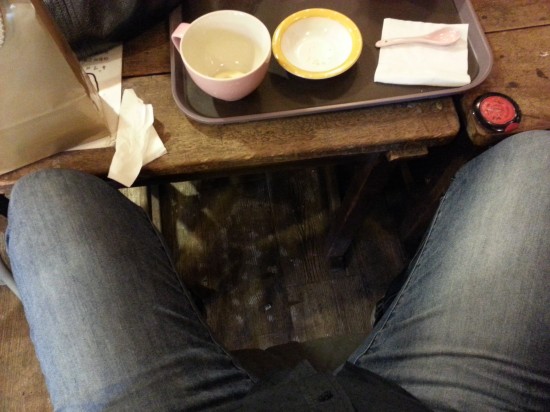 We were at a new childhood nostalgia themed tea house in Insa-dong called Insa-dong Ppong Dabang 인사동 뽕 다방, where we were all a tad too big for our tables. 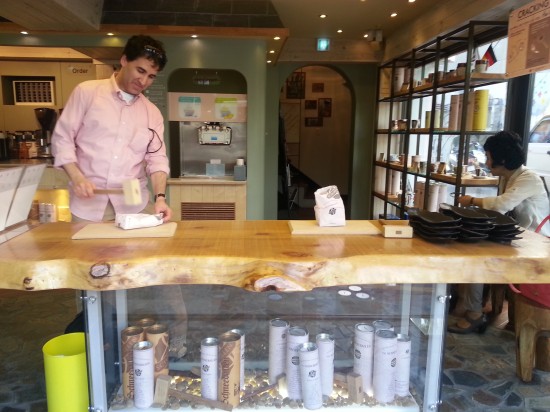 Also had the privilege to hang out with Seattle food writer Jay Friedman. Here he is whacking the crap out of a Schneeball. Will talk about those later. 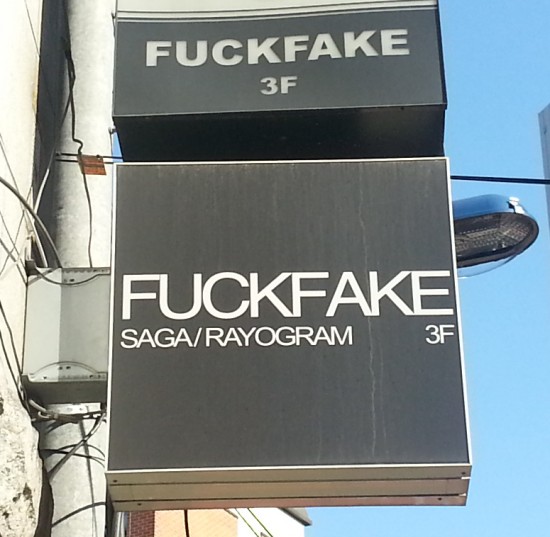 When opening a clothing store in Hongdae, make sure to have a brand that truly stands out. 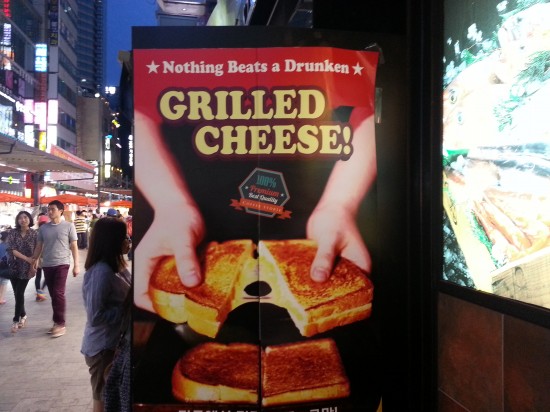 No truer words were said. 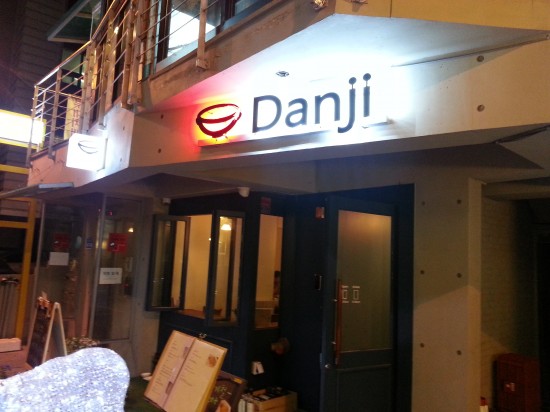 Wow, a double rip-off! So, you may think I am getting out my Jump-to-Conclusions Mat when guessing that this restaurant is copying its name from Hooni Kim’s Michelin-starred Danji in New York.  But then they also do a logo that’s a bit similar to Chef Kim’s other restaurant, Hanjan.

And get this–they’re an ITALIAN restaurant! I guess they’re going for the Porchetta Copycat Award. 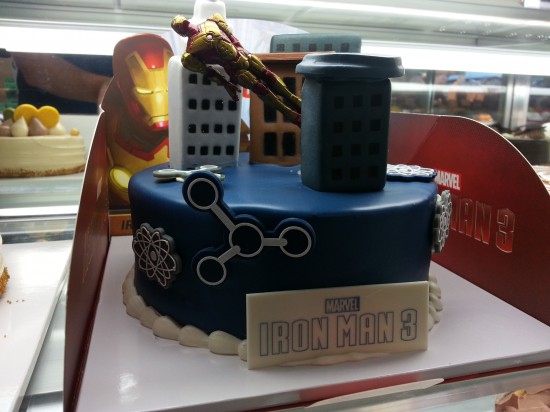 Sighted at my local Paris Baguette. Keep in mind that this is a mass produced cake. Wow! Take that, Cake Wrecks! 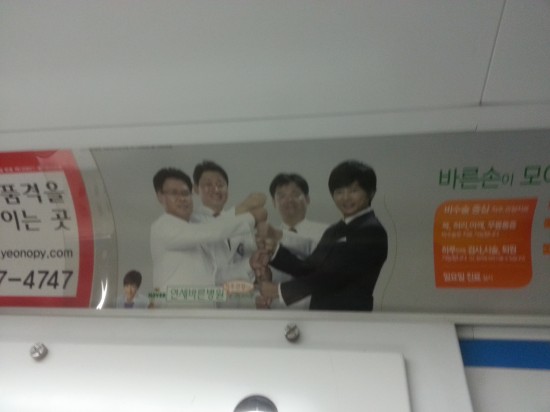 Is my mind just dirty thinking what I’m thinking when seeing an ad like this? 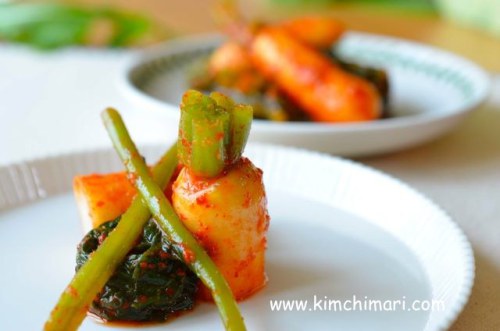 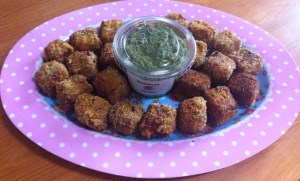 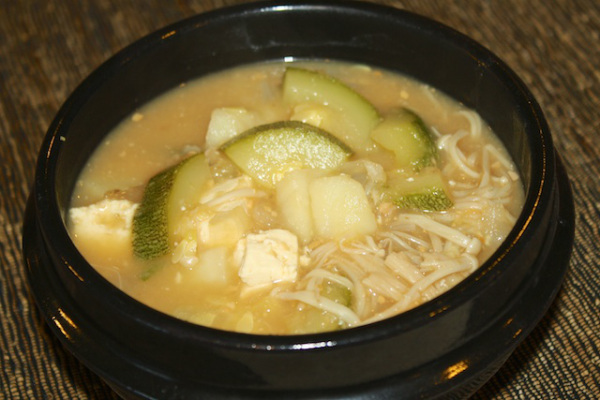 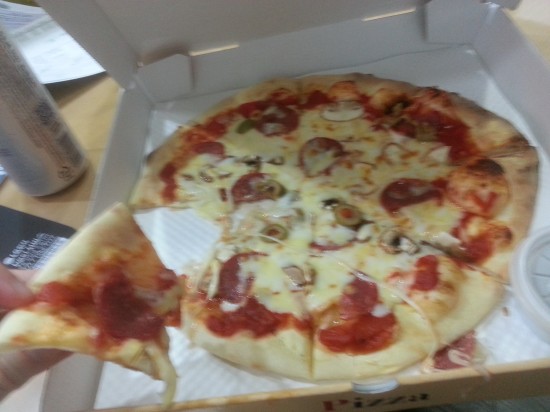 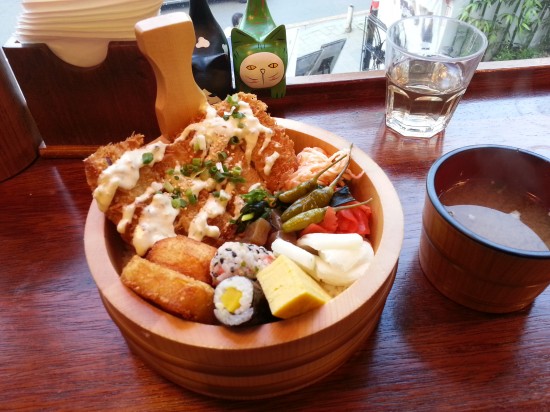 A branch of Kokoro Bento opened near the office. It’s my new favorite lunch stop.

Speaking of outdoors, check out this gorgeous BBQ spot in Paju