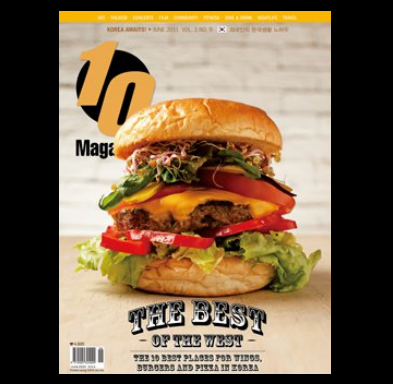 The latest issue of 10 Magazine features three cover stories that took months of research to produce. Three of us each went and tried to find the 10 best burgers, pizzas and wings in the Seoul area. I had the wings beat, and the task was much more difficult than I originally expected. Every time I thought I had covered a major wings joint, a new one would be mentioned. I trod in the rain to different pubs in a single evening, fought Wing Night crowds and even had to do a last minute switch up when one business closed down soon before publishing. I also tracked down and interviewed the owner of the legendary Beaver Wings, which was the first full-fledged wing joint in Korea.

Editor Stephen Revere, near the front of the magazine, warns that many will be upset by our picks. It wasn’t easy on my part. I kept a lot of notes, but the order shuffled a few times. I then decided to rate them according to overall experience. I only found the rankings for the burgers and pizzas after I received the issue, and I pretty much agree with the burger list. Most of the pizza places I haven’t tried yet.

The issue has just hit the racks at major establishments and hotels. This is one I’m going to keep handy as a guide when I get that hankerin’ for some pizza or burgers.

OH… a note that the burger on the cover was created by Kevin Cyr, owner of Chili King–one of those Itaewon restaurant owners who is quickly becoming a larger-than-life legend himself. He told me last week that he’s finally working on a challenge burger, as in something so humongous that there’s a reward for finishing it within 20 minutes.