New York: Getting Kinda Used to This

This is the fourth time I’ve made this overseas flight, and it seemed to go much faster this time. It does help that they have more entertainment options. I still can’t sleep on these flights, but I think I did shut my eyes for an hour or two.

Oh, and do you need anymore proof why Korean Air is awesome?

Yes, that’s a Starcraft II ad. I wish I coulda ridden that plane.

The only disaster I had was on the way to Shanghai. I think something was up with the cabin pressure because I left with a big headache and stuffy feeling. But I also think the odd pressure caused my pen to explode, pouring ink all over my hands as I attempted to fill out my embarkation card. You know, usually when a pen leaks, you don’t feel it. The ink from this incident felt like blood dripping all over. I was wearing my new suit jacket, and luckily no ink got on my clothes. But it took a while to get most of the ink off my hands using a napkin and my cup of water from the airplane snack.

Shanghai was hot. I had a three-hour layover there, but after going through immigration, picking up my bag and standing in another long line at the ticketing counter for my boarding pass, I only had an hour to kill. Was greatly tempted to get some noodles. My experiences in Osaka, Fukuoka and Incheon have taught me that noodles at Asian airports are good.

Had a window seat. I was happy about that at first. My last trip to America and back I was stuck in the center of the cabin. No window. No aisle. I felt very claustrophobic. But in a post-Google-Earth world, the window seat has lost its luster. And the girl next to me slept almost the entire way, so I couldn’t go to the bathroom without waking her up.

I also think that the airlines move the seats closer by one inch each year. I had to crawl on top of the seats to get out.

As I said, the entertainment options are much better, even in the past two years. I was planning to use my laptop, but the electrical outlet didn’t work. I wasn’t sure if it was the outlet or my adapter. Since I need my laptop for my presentation, I decided to play it safe and save the battery juice. But I got caught up on my summer movies. Really liked “The Karate Kid.” And “A-Team” was the mindless fun I was hoping for.

Checking in to Newark airport was painless. It’s funny that even in communist China the officials are much nicer than the people in American airports. This time, they weren’t as rude as the ones at Dallas-Ft.Worth, but they do treat you like you’re a child and that dealing with you is the worst part of their day.

It does feel like I’m going back in time when I return to the U.S. Incheon Int’l has been rated the best airport in the world for the past few years for good reason. American airports are run down. Baggage carts aren’t free. The lines are long. But as I said, it was pretty smooth in getting through. I met a guy returning home from Korea because he got a job teaching hockey in New Jersey.

Wendy Chan and her husband picked me up outside. Then we waited in traffic. They said this was the worst traffic they’d seen. It was around 8:00, and they were on the phone with their daughter, Veronica, making dinner arrangements.

“The earliest reservation I could get was 10 o’clock.”

Traffic was so bad to and inside the city that we missed that reservation. I didn’t mind at all. It didn’t feel any worse than Seoul. The “crazy” taxis were normal in my world. And we had great conversation.

There was a street festival going on, which was making traffic crawl more slowly. Wendy’s husband and I got out and loaded off my bags at my apartment stay. My host was still in Seoul, so I thought it would be empty. We were surprised to see two legs through the glass in one of the rooms. Like someone dropped a room on the Wicked Witch of the East. I think another guest is staying here. I haven’t met her yet. I just unloaded my stuff and left.

Wendy and Veronica had found a parking spot, and we headed to a restaurant called 10 Downing Street. It’s so strange to be back in an American restaurant. It’s like being in Itaewon. The lighting was super dark. Only one or two tiny candles per table. People were enjoying oysters. A bartender was vigorously shaking cocktails. The hostess and servers were personable.

I had a hard time choosing from the menu. The mains sounded okay, but the appetizers sounded exciting. I chose the braised lamb shoulder with gnocchi. The server asked if I’d like any starters. I couldn’t resist and said, “The bone marrow, please.”

They gave us some bread and hummus to start. I had a glass of Brooklyn Brewmaster beer. Real beer! We were so engrossed in our conversation that when the waiter said that the marrow would be delayed because the chef was not satisfied with it that I hadn’t noticed that our food was taking a long time. And that was another shocker. A chef at a nicer restaurant didn’t send something out that was bad. 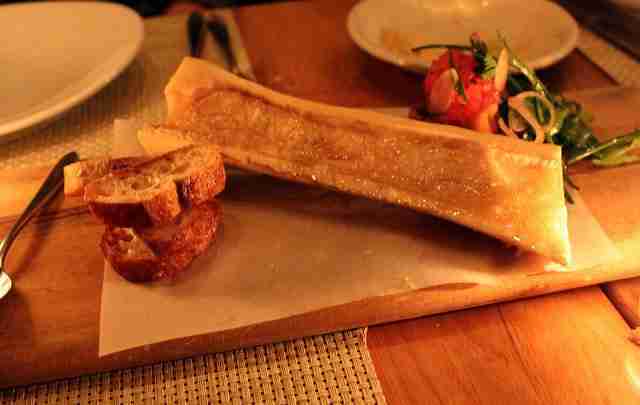 When the bone marrow came out, I was so happy. It was so rich and buttery, and it tasted like GalbiTang on toast. My lamb was also amazing. Subtly flavored with rosemary and spices in a veal jus it was perfect. The gnocchi were little potato clouds. I only wish I had gotten more bread to sop up that jus.

Before going, Wendy gave me some artisan ginger ale from Bruce Cost. I just tried a bottle this morning while checking my email. It has a major kick! This is the real stuff with actual ginger floating in it, and it has that medicinal burn of fresh ginger. What a great day to start the day.

My room is how I expected it. The bed is very comfortable. It’s strange to wear shoes inside. And even though I’m in Manhattan, it’s pretty quiet. Not nearly as noisy as living near Seoul.