We did it. I met Eun Jeong’s mother, and it was a success!

We had booked train tickets to Pohang (next to Gyeongju) but were too late to book train tickets for the return home, so we got bus tickets instead.

We woke up early and made it to the train station at a decent time. I grabbed some shrimp burgers from Lotteria, bypassing Krispy Kreme because it just looked like a clusterfuck to order there.

Lotteria wasn’t that different. I wanted something quick, and I saw that there was a pile of Frico burgers wrapped behind the cashier in the ready bin, steaming up the glass. I ordered two shrimp burgers and a Frico burger.

I guess all those Frico and Gochu burgers wrapped behind her were for some catered morning party. I stuck with the Shrimp burgers and got some bottled tea at the convenience store.

The train ride was quite comfortable. Eun Jeong slept most of the way. I read a book and listened to podcasts on my well-stocked iPod. Being winter, the landscape wasn’t as beautiful as I hoped. It looked bleak and scrubby.

We got a snack in the dining car. I wasn’t expecting much from train food, and I was right. It wasn’t stellar, but at least it was edible. It was nice to sit at a table for a while.

At the train station, Eun Jeong’s little brother met us wearing a golden hanbok. He was very happy to see us, compared to the last time I saw him, where he looked worn down and sick. We loaded our stuff into his van and stopped by a grocery store to pick up a gift. We already were bringing a couple of gifts, my salted caramels and a Chinese liquor that Eun Jeong got in China a few years ago. We needed to get something safe and conventional too. The conventional gift ended up being a box of Korean pears.

We got to the apartment building, and oldest brother-in-law was outside in a gray hanbok. He greeted us warmly, and we went inside the apartment. I should note that I was wearing a suit, so I wasn’t under dressed. Yet I was wearing socks that were comfortable but worn looking. We ducked into a room, where I changed my socks.

Upon exiting, I met Eun Jeong’s mother, who had her toddler grandchild strapped to her back. She was nervous, as was I. She took down the baby and sat on the floor. Eun Jeong looked at me.

I remembered Eun Jeong showing me how to bow, but I didn’t think she was serious. And besides, the lesson ended in her laughing at my hopeless awkwardness.

Nonetheless, I got on my knees and bowed with my hands on my forehead.

Later on, Eun Jeong’s mother said she had a good first impression of me. They immediately sat us down for food–the men, Eun Jeong, and Mom.

Little Brother and his daughter

Now, I’ve already stated that Mom makes the best kimchi I’ve had in Korea. It’s smooth, complex and almost meaty tasting. The rest of her food was just as amazing. We had Japchae, Galbi Jjim, fresh fish, fried shrimp and little morsels and rice that tasted earthier than normal. I ate well, despite having just eaten on the train. Little Brother held up a bottle of Hite beer and a box of another liquor, Beopju, asking which one.

Eun Jeong nudged me with her elbow, “Beopju.”

That was another pleasant surprise. This Gyeongju Beopju was way different from soju. Soju is more of a rice whiskey while Beopju is more of a rice wine, like sake. It’s smoother than sake–so much so that you can slug it straight from the bottle if you were so inclined.

After we ate, the kids and other women ate. Two drinking tables were set up with snacks and fruit for the men to start drinking–more Beopju. We went through two tall bottles of it. Eun Jeong, bless her heart, did her best to translate what I couldn’t communicate myself. Oldest Brother-in-law was serious but pleasant. It got difficult when he started asking me about the U.S. presidential race because Eun Jeong’s vocabulary wasn’t ready for such a conversation. Also, Mom asked us when we were going to get married, to which I abdicated to Eun Jeong. 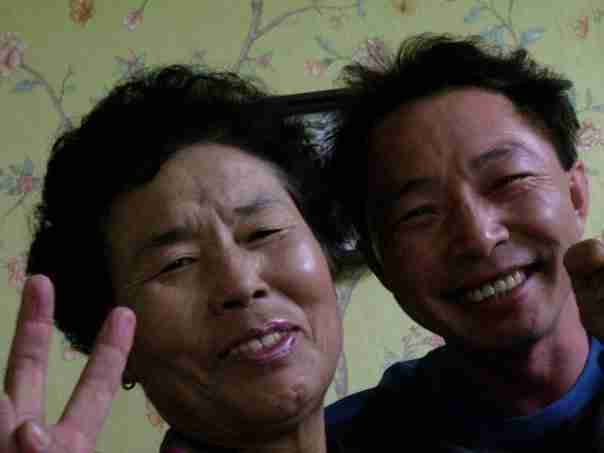 Luckily, we had Crazy Fun Brother-in-law, who packed more liquor than I did and loved to practice his Konglish. Eun Jeong broke out the salted caramels for everyone, and they all tried it. By then, I had already changed from my suit to my Korean “Give me a beer” t-shirt. The shirt under the suit had gone too wet in the armpits.

When everyone tried my caramels, I started sweating again. As predicted, it was a little too strange for many of them. And I appreciated their honesty. Too salty, which I understood. Caramels can be too sweet, so I overdid the salt.

Nonetheless, the people to did like them REALLY liked them. I like them myself and am surprised the experiment worked. The toddler twins couldn’t get enough of them, even though they were deathly afraid of me the entire time.

One of the cousins and his wife came over. He loved the caramel while I watched his poor wife politely suffer what she obviously didn’t like. I wanted to tell her she didn’t have to eat it. Mom ended up going with Cousin, Oldest Sister and Oldest Brother-in-law to make some Seollal visiting rounds. Eun Jeong, Little Sister and I went to visit Older Sister (Crazy Fun Brother-in-law’s wife) at work, where she manned a cosmetics shop.

That was fun, and she gave Eun Jeong some freebies. I, meanwhile, started playing with some foundation tester for fun, which was harder to take off than I thought. 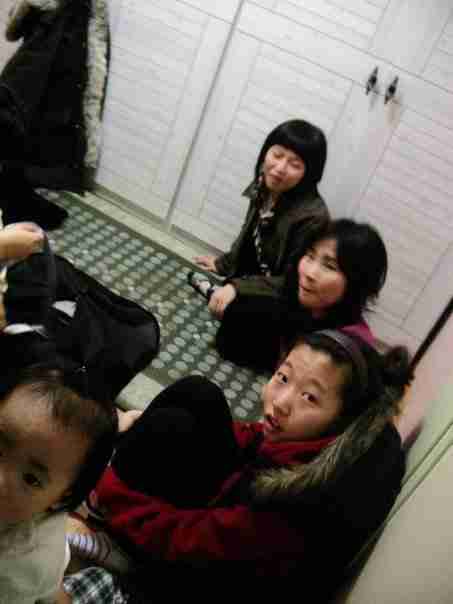 We returned to the house and more drinking ensued. Eun Jeong went through photo albums with her family members. 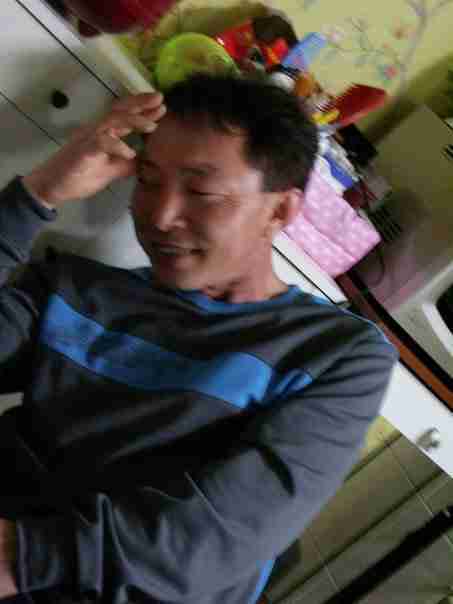 I mostly hung out with Little Brother and Crazy Fun Brother-in-law. At one point the electronic dictionary was fruitlessly pulled out. My Korean SUCKS!! 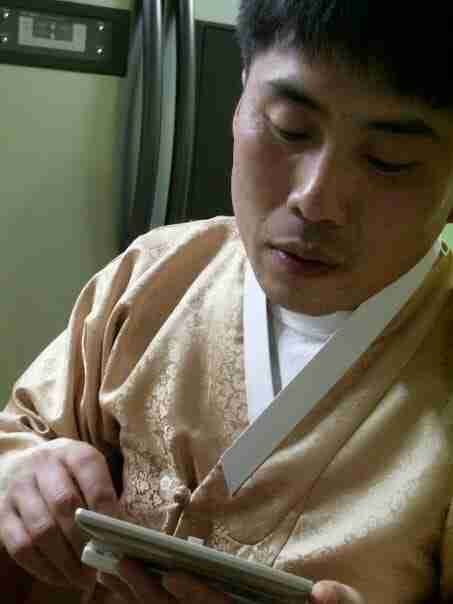 We ordered some chicken from a place the Crazy Fun Brother-in-law and the teenage nieces raved about. It was amazing boneless chicken that came with four distinct dipping sauces. The family also made the traditional new year DdeokGuk. Some of the women were craving Bibimbap, so they raided the fridge and made a giant bowl.

After a while, I went to the back room, where Eun Jeong was going through pictures again, and conked out on the heated floor mat, which was our bed for the night. 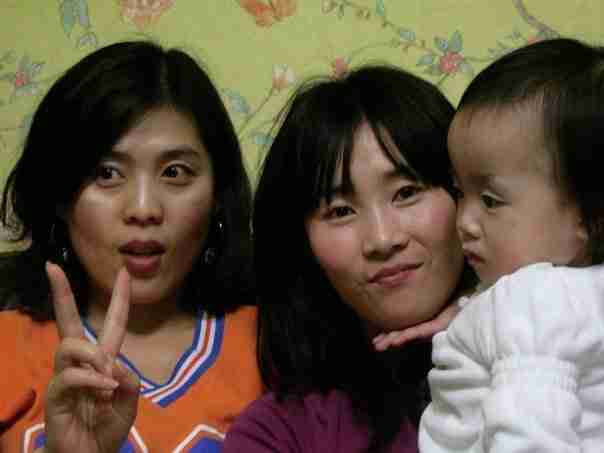 The next morning was nice but fairly uneventful. We had to catch a bus at 11. Breakfast was served, which was basically what was served the day before plus some YukGyeJang (spicy beef soup). Eun Jeong and Mom had that fussy little argument kids have with their mothers when the mothers want to pile them on with gifts while they’re leaving. We also got two envelopes of money from Mom and Oldest Sister. I was so surprised by them that it didn’t occur to me to do the Korean refusal game. I just took it and thanked her.

I hugged Mom and everyone on the way out the door while the toddler twins cried–because I was still there and scared them. Crazy Fun Brother-in-law gave me a big hug on the way out. Little Brother and Little Sister drove us to the bus terminal in Gyeongju. It was funny observing them talk. It reminded me of when my brother and sisters get together.

The bus ride was not comfortable, but it was faster than I anticipated because the cars actually respected the bus lanes most of the trip, so the bus ran forward unhindered. We got to the Express Bus Terminal in Seoul and had some JjajangMyeon before embarking on another bus for home.

We were exhausted, but we were happy. I passed the test. Eun Jeong has a different look in her eye now.

I think I’m a keeper.