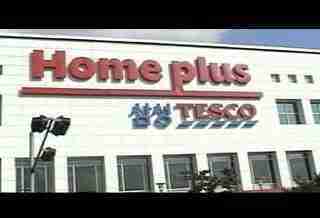 This was the first video I made back in September 2004, around Chuseok, Korean Thanksgiving. Brant and I were shopping for stuff for a foreigner party at his place. I found out later that Home Plus doesn’t let people film in or near its stores. I guess I got away with it.

While we were shopping, Eric, our supervisor, was trying to track us down because the school owners wanted to have us over for some small face time. We found out by the few who weren’t so evasive that we didn’t miss anything. In the background in one shot, you can barely make out Brant saying on his phone, “Tell Eric that we went out of town.”

Home Plus is a little different from your western big box superstore, with shrink-wrapped octopus,

and tables of meat!

There are also some western fusions of traditional western cuisine, such as sandwich kimbap.

Since it was Chuseok, all the stores were selling gift packs. It seemed a popular one was a gift set of tuna and canned ham…

with its own carrying case.