“Earth Is Gone” is Back! 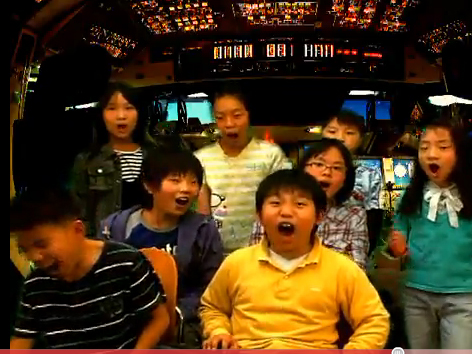 My most ambitious class video project has been rescued!

In May 2007, we made a few videos at my old school. The one that took the most effects work was one the kids called, “Earth Is Gone.” That was the premise. They came up with the ideas, and I wrote the script, trying to highlight the students’ individual personalities. I used filters, music and shots to mimic Battlestar Galactica, and I figured out a way to cut out the Millennium Falcon and superimpose it on the Seoul cityscape.

After all that work, YouTube killed it a year after it went online. Some software they were using was looking for music copyright violations. Even though I argued that the clips I used fell into Fair Use, they removed the entire audio from the movie and replaced it with some stock music. The dialogue was gone. Everything.

I had experienced one of my famous computer breakdowns before then, and all original copies of this movie were gone–like a meteor struck them. There was no way to retrieve anything from all that hard work the kids put into that.

I found out today that the old version had been restored. I was so happy that I went ahead and added Closed Captioning so viewers could fully understand the dialogue. Here it is.

While we’re on the topic of student videos, here’s the classic “Clash of the Superkids” vid we made around that time.